Previous postTrump wants a see through border wall so people dodge flying bags of drugs
Can Chance the Rapper save Soundcloud from dying?Next post 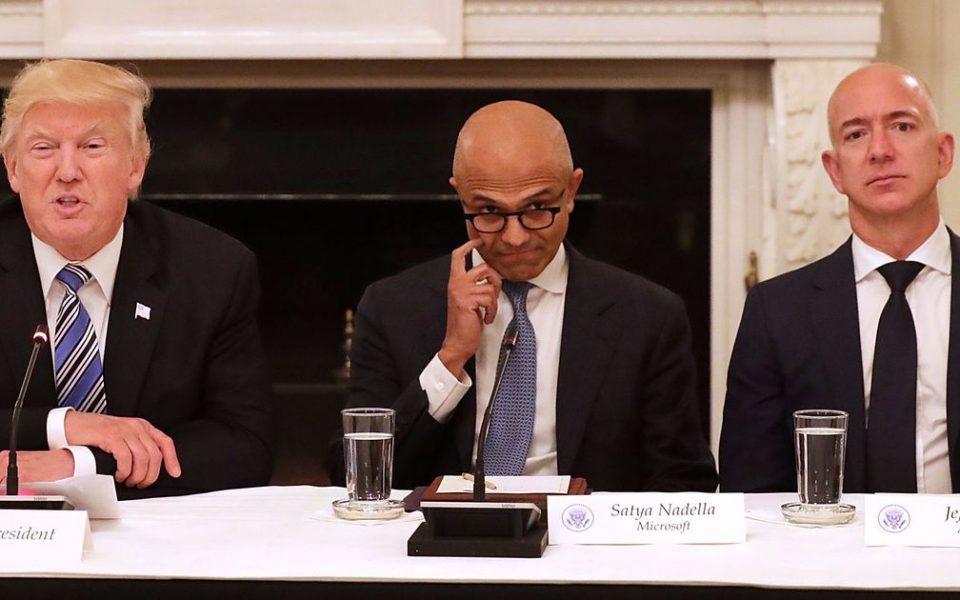 Amazon is arguably the most feared name in all of consumer business at the moment.

The online shopping juggernaut is smothering retail chains, spooking supermarkets, and steamrolling into probably half a dozen other sectors on the side. And its forward momentum shows no signs of slowing.

That unnerving power has led some Washington lawmakers to wonder how this so-called “everything store” jibes with laws designed to keep any one corporation from gaining too much market power and ensure fair competition between businesses.

Douglas Kass, an influential hedge fund manager, claims that politicians on Capitol Hill have begun to explore possible antitrust cases against the company.

“Early discussions and due diligence” are “being considered in the legislative chambers in Washington DC” the investor somewhat flimsily asserted in his regular column for The Street this week.

Kass, who’s been vocally bearish on Amazon, used the same post to reveal that he’s also short-selling (effectively betting against) the company’s stock, so he’s not exactly an impartial observer. But he’s not the only one raising the specter of government intervention as the company swallows market after market of consumer goods.

Too big to sale

The U.S. has laws in place to prevent any company from becoming too powerful. Amazon looks poised to test them.

For years now, Amazon’s general dominance of American e-commerce has been pushing activists and industry watchers to float questions of whether the government should step in.

Government regulators, however, have never paid them much mind.

But news of Amazon’s blockbuster acquisition of Whole Foods last month has breathed new life into the discussion. While Whole Foods only controls 2 percent of the overall grocery market and online groceries as a whole just 1 percent, Amazon’s first major brick-and-mortar conquest has captured the public imagination and spooked legacy retailers and startups alike.

The realization of CEO Jeff Bezos’ famous vision of an “everything store” suddenly seems a lot nearer at hand.

Ro Khanna, a freshman House Democrat from Silicon Valley who leans towards the progressive Bernie Sanders wing of the party, was among the first to sound the antitrust alarm in the wake of the deal’s announcement.

Democratic House Rep. David Cicilline followed on Thursday with a more substantive motion to back the concern. The Rhode Island legislator, who sits on the House antitrust and competition subcommittee, called for a congressional hearing on the deal in a lengthy letter to relevant congressional leadership.

“Amazons proposed purchase of Whole Foods could impact neighborhood grocery stores and hardworking consumers across America, Cicilline said in a statement. Congress has a responsibility to fully scrutinize this merger before it goes ahead. Failing to do so is a disservice to our constituents.

NEW: My letter calling for a hearing on @amazon‘s proposed purchase of @WholeFoods. Need to protect CONSUMERS and WORKING PEOPLE. pic.twitter.com/idXxOPDzO6

To be clear, the action that Cicilline and his fellow critics are advocating would likely mark a watershed shift in the way U.S. competition law has been practiced for the last four decades or so, and they acknowledge as much in their challenges.

The prices are right

Antitrust policy, as it’s strictly interpreted in the country today, is premised almost exclusively on whether or not the act of consolidation in question harms consumers. Since Amazon’s always managed to keep prices low and maximize convenience, most antitrust experts agree there isn’t much of a case to be made herea consensus to which Cicilline alludes in his letter.

But some prominent experts in the field are beating the drum for a different approach. Proponents like Lina Khan and Matthew Stoller of the think tank New America’s Open Markets Program argue that the status quo is too narrow to protect the public in an era of tech titans like Google, Facebook, and Amazon.

They think the regulatory structure should also account for variables like long-term consumer impact, employment, and harm to small businesses.

Their advocacy has caught the eye of a small group of Washington policymakers inclined towards economic populism, like Khanna, Minnesota representative Rick Nolan, and Wisconsin representative Mark Pocan. The three have teamed up to work towards a congressional caucus covering monopoly issues, according to a New Republic piece from Stoller this week.

“Their work has gotten the attention of some of us in Congress that we need to reorient antitrust policy from the Robert Bork days,” Khanna told The Atlanticlast month, referencing the antitrust scholar whose 1978 book, The Antitrust Parodox, is widely seen as the genesis of today’s consensus.

Conservative opponents and academic skeptics counter that the current regime has yielded measurable benefits to consumers and that changing it would create more potential for politically motivated abuse of the regulatory apparatus.

In any case, the chances of Donald Trump’s business-friendly administration raising an objection to the deal look slim, and most experts agree there isn’t much of a case to make as things stand now.

Ironically, it was Trump himself sparked one of the furthest-reaching national discussions of Amazon’s antitrust questions on the campaign trail last year. The then-candidate told Fox News’ Sean Hannity last spring that Amazon has a “huge antitrust problem” in seeming retaliation for negative coverage in the Washington Post, which Bezos owns separatelya fact that frequently draws Trump’s ire.

Like many of the more economically populist ideas Trump floated on the road to the White House, this notion seems to have been abandoned as the president has more or less toed the party line.

However, Trump officials have reportedly entertained the idea of blocking the monster merger of AT&T and Time Warner, the parent company of one of Trump’s favorite punching bags, CNN, to hit back at the network’s supposedly “unfair” coverage. Empty threat or not, the report suggests the president may be serious about putting the federal government’s regulatory muscle behind his petty Twitter beefs.

It’s a possibility for Bezos thanks to his ownership of The Washington Post, which has broken a variety of stories that have had a negative impact on Trump.

Kass cited Trump’s antagonism to Bezos in his argument for his short.

In the Trump administration we also have a foe against Jeff Bezos, who not only runs Amazon but happens to own an editorially unfriendly (to President Trump) newspaper, The Washington Post, Kass wrote.

Amazon shares dipped by a fraction of a percent on Thursday, but the blip was negligible amidst the momentum from its record-breaking performance on Prime Day, a shopping holiday the company unilaterally willed into existence.

WATCH: Amazon has so many orders that it needs its own cargo plane