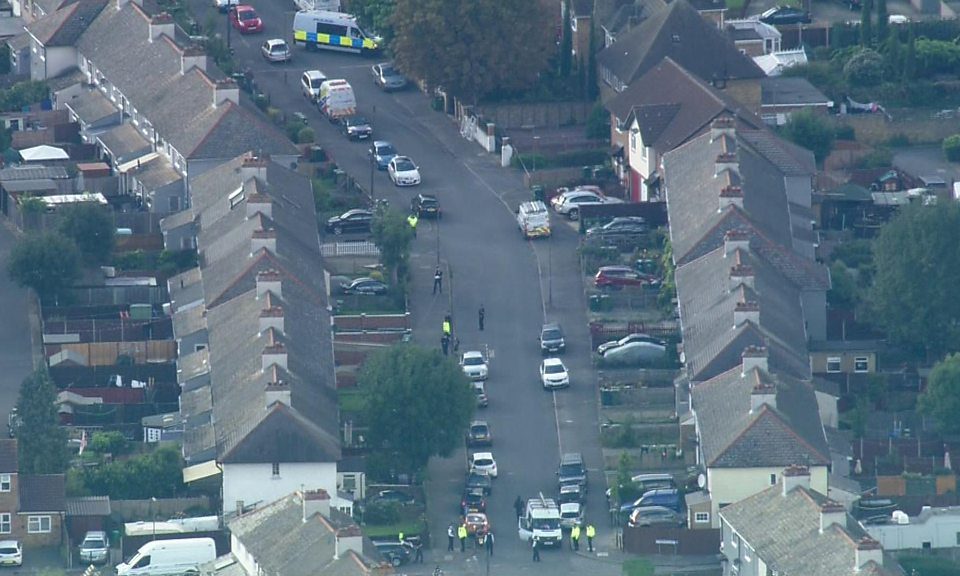 Police have arrested an 18-year-old man on suspicion of a terror offence in connection with Friday’s attack on a London Tube train.

Armed police are continuing to search a house in Sunbury-on-Thames, Surrey.

The man was arrested in the departure area of Dover port on Saturday and has been moved to a London police station.

Thirty people were injured after the explosion on a train at Parsons Green.

The arrest sparked an evacuation of Dover port and a number of items were recovered in a police search, Mr Basu said, adding that detectives were “keeping an open mind” as to whether more people were involved in the Tube attack.

Residents of houses surrounding the Sunbury-on-Thames property have been allowed to return home after being evacuated by officers earlier on Saturday.

Locals said the property being searched by police is occupied by married couple Ronald Jones, 88, and Penelope Jones, 71.

The couple are known for fostering many children and young people over several decades, and in 2010 were rewarded by the Queen by being made MBEs.

One neighbour, Anna Wilkins, told BBC News she was “shaking like jelly” after being told by armed police to leave the home she shares with her partner and two young children.

“As I walked out of my house I saw three armed officers,” she said. “One had a balaclava on, all I could see were his eyes, I was really frightened.”

Many residents had been evacuated to Staines Rugby Club where one local, Dan Norcott, said the council had begun making preliminary arrangements for hotel accommodation.

After a meeting of the government’s Cobra emergency committee earlier, Home Secretary Amber Rudd said it was “much too early” to say whether those behind the attack were known to authorities, adding: “The operation is ongoing”.

The terror threat level was raised to critical, meaning an attack may be imminent, on Friday evening.

Ms Dick, who travelled by Tube before joining Met officers patrolling the South Bank, said: “London has not stopped after other terrible attacks and it will not stop after this one.”

Operation Temperer, which involves the use of the military was put in place after the threat level was raised and is being stepped up gradually.

Home affairs correspondent Danny Shaw said it is mainly focused on London and the south-east of England and is described as “light-touch”, and not on the same scale as what was seen after the Manchester Arena attack.

Most people caught in the blast were treated for minor injuries and have been released, NHS England said, but three people remain in Chelsea and Westminster hospital in central London.

This is the fourth time the UK national terror threat level has been raised to critical since the system was made public in 2006.

The last time was in May following the Manchester Arena bombing, when it was wrongly thought the bomb-maker was still at large and could strike again.

On Friday the government delayed raising the threat level to critical for more than 12 hours under advice from the Joint Terrorism Analysis Centre. On Saturday the home secretary said it would remain at this level, implying that despite the arrest there is still thought to be a risk of another imminent attack.

Each time the level has gone to critical, it has only stayed at this highest level of alertness for three to four days – this is partly as it involves an unsustainably high tempo for the police, intelligence and security services.

Extra patrols are mounted on the streets of London, covert surveillance is stepped up and troops are deployed to free up police officers to focus on the main effort: catching the bomber before he can plant another device.

But the very fact that Friday’s attack took place with no warning shows this system is only a broad guide to the threat and simply reflects the latest assessment.

The BBC understands CCTV images have been obtained of the person suspected of planting the explosive device.

The Islamic State group has said it was behind the bomb, which detonated at 08:20 BST on Friday.

It is understood the device had a timer, but the BBC’s security correspondent Frank Gardner said the bomb appeared not to have gone off properly.

The Met’s Assistant Commissioner Mark Rowley said it was “very routine” for the Islamic State group to claim the attack, whether in contact with those involved or not.

They urge anyone with information to get in touch and to upload pictures and video to the website www.ukpoliceimageappeal.co.uk or to call the Anti-Terrorist Hotline on 0800 789 321.

Were you at Parsons Green station? Did you witness the events? If it’s safe to share your experiences then please email haveyoursay@bbc.co.uk with your stories