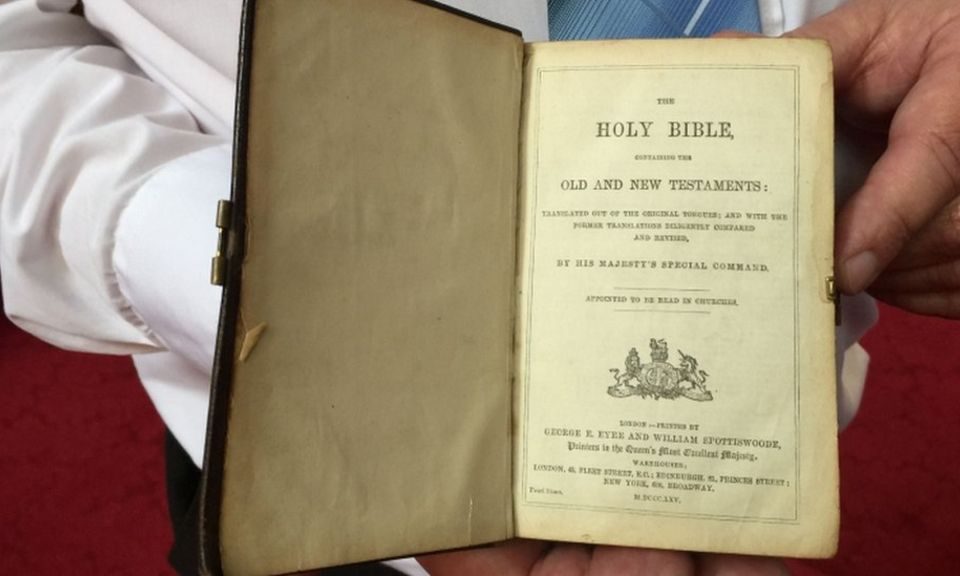 A 151-year-old Bible has been returned to the Scottish descendants of its original owner after making a 3,500 mile journey from the US.

The book was returned after American owner Marshall Whitehead decided to track down the family of the original owner.

It was eventually handed to Donald Mackechnie, 66, at his home in Glasgow.

The Bible had originally belonged to the great-grandfather of Mr Mackechnie’s grandmother.

Mr Whitehead, who was gifted the pocket-sized book in 2001 by an amateur Bible collector from Cleveland, Ohio, had rediscovered it when moving home in May.

Noting that the Bible bore the name Alexander MacDonald of Inverness with the date 1 January, 1866, he decided to track down the descendants of Mr MacDonald, who was born in 1825 and worked as a ship master, wine merchant and grocer.

After contacting Highland Council, he was put in touch with Anne Fraser, a historian at the Highland Archive Centre who created a MacDonald family tree.

Mr Whitehead then used social media to track down Mr Mackechnie’s daughter Mairi in Glasgow, who alerted her Islay-raised father.

The Bible, which had a four-leaf clover tucked within its pages, was hand-delivered to Mr Mackechnie by Alistair Begg, a pastor at Mr Whitehead’s church in Ohio who is originally from Glasgow and was visiting relatives in the city last month.

Mr Mackechnie, clerk to the board at St Columba Gaelic Church of Scotland in Glasgow, said: “There was a knock on the door one day and this chap was standing there.

“I almost fell on the floor when he explained what he was giving me. I could not believe it, it was such a shock and a surprise.

“The whole family are delighted and over the moon to receive his previously unheard of family heirloom.

“It does not even enter your head that this kind of thing could ever happen – it is quite amazing.”

Mr Mackechnie, a retired mechanical design draftsman, said the story of the Bible’s return to Scotland is “fascinating and shows there are still kind people in the world”.

Mr Whitehead, who chose the book from a collection of more than 100, said he believes it is not a coincidence that it has been returned to the family of the original owner.

“I am very pleased that this keepsake treasure of the MacDonald family, located in Cleveland, Ohio, was safely returned to Mr MacDonald’s native homeland,” he said.

“It would not have happened if it had not been for the tireless effort of Anne Fraser and the kind gracious act of my senior pastor, Alistair Begg.”