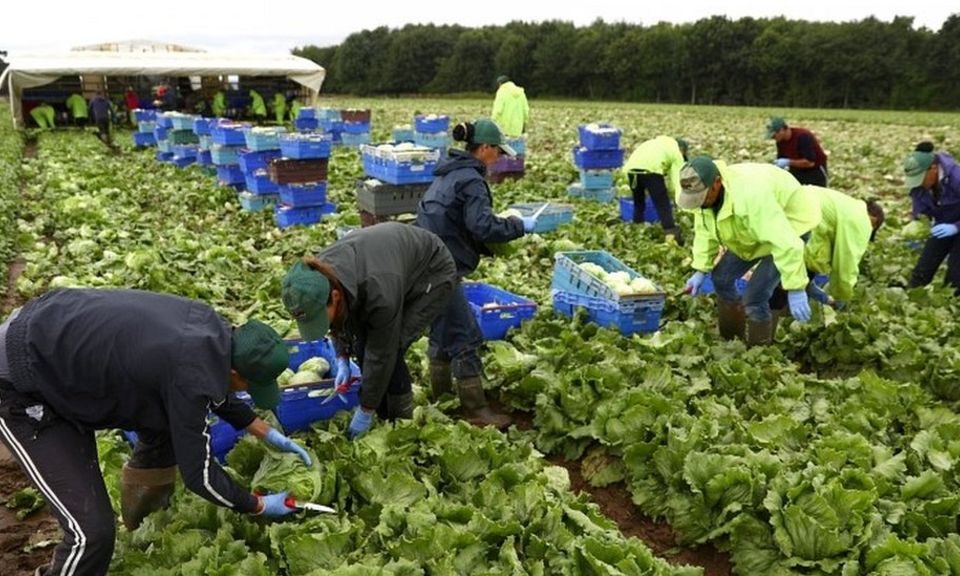 Firms that rely on EU workers have warned of the “catastrophic” impact of proposals to slash unskilled migration on the day Britain leaves the EU.

Under the draft plan, leaked to the Guardian, firms would have to recruit locally unless they could prove an “economic need” to employ EU citizens.

They could face a skills tax to boost training of UK workers if they still chose to employ unskilled EU staff.

But business groups say a “sudden” cut could cause “massive disruption”.

The National Farmers’ Union claimed the “entire food supply chain” could be threatened.

NFU deputy president Minette Batters said: “We are calling for an urgent and clear commitment from government to ensure that farmers and growers have access to sufficient numbers of permanent and seasonal workers post-Brexit.

“And we need clarity on the new rules for EU nationals living and working in the UK well before free movement ends in March 2019.”

The leaked Home Office document has not been signed off by ministers, who will set out their post-Brexit migration plans later this year.

But Defence Secretary Michael Fallon said: “The public voted to leave the European Union. That means freedom of movement has to end.”

He said “people with the right skills” would still be “welcome”.

But he added: “Equally we have to make sure that British companies are also prepared to train up British workers.

The prime minister has at least two big reasons for wanting to get this right.

For Theresa May, the referendum result was a clear instruction from the British people that they wanted to reduce the levels of immigration. Politically, therefore, she believes it’s a demand she has to meet.

And as home secretary for six years, when the government continually flunked its own immigration target, the new system that will control immigration is finally, perhaps, a chance to meet her own long-missed goal.

So Wednesday’s mega-leak from the Home Office of the potential design of the post Brexit system is significant. Read more

“The public are very clear, they want to see immigration not stopped but brought properly under control.”

His message was echoed by Theresa May at Prime Minister’s Questions, who told MPs immigration had to be cut to ease the strain on public services, adding that it “often hits those at the lower end of the income scale hardest in depressing their wages”.

The EU has not issued an official response to the leaked document. Unnamed sources have told The Times the EU would block access to the single market during the transition period the UK wants after Brexit if it presses ahead with the proposals.

Michael Fallon said the government would take the views of business into account when drawing up its migration policy.

But business groups have hit back at his suggestion that they are using cheap foreign labour rather than training up British workers.

The British Hospitality Association said: “If these proposals are implemented it could be catastrophic for the UK hospitality industry and for those who enjoy the hospitality it brings.”

The BHA claims 75% of waiters, 25% of chefs and 37% of housekeepers in the UK are EU nationals and at least 60,000 new EU workers are needed every year to fill vacancies.

The organisation said it would take 10 years to train up enough British workers to plug the gap and some businesses would fail in the meantime, “taking UK jobs with them”.

Ian Wright, director general of the Food and Drink Federation, said: “If this does represent the government’s thinking it shows a deep lack of understanding of the vital contribution that EU migrant workers make – at all skill levels – across the food chain.”

A trade body representing Britain’s manufacturers, the EEF described the leaked proposals as a “mixed bag”.

“On the highly skilled side, the system described is one we can work with, after some changes,” a spokesman said, but it had “grave concerns” about low-skilled workers, “with many UK manufacturers telling us that they simply don’t get jobs applications from prospective UK workers”.

The Home Office document obtained by the Guardian, entitled the Border, Immigration and Citizenship System After the UK Leaves the EU, is marked extremely sensitive and dated August 2017.

Among the ideas in it are:

“The government will take a view on the economic and social needs of the country as regards EU migration, rather than leaving this decision entirely to those wishing to come here and employers,” the document states.

Low-skilled migrants would be offered residency for a maximum of two years while those in “high-skilled occupations” would be granted permits to work for a longer period of three to five years.

EU citizens coming as tourists, on short-term business trips or visits to friends and family would be able to enter the UK without needing permission, under the draft proposals.

Those staying longer would need to register for a residence permit by showing proof of employment, study or self-sufficiency. Applicants’ fingerprints could also be taken.

The document says the new regime would only come fully into force at the end of a transition period, which could last up to three years.

The proposals would not affect EU nationals already living and working in the UK – the government says they should be given the right to apply for “settled status” after five years of being lawful residents, although agreement on this has yet to be reached in Brexit talks.

The leaked document says: “Put plainly, this means that, to be considered valuable to the country as a whole, immigration should benefit not just the migrants themselves but also make existing residents better off.”

Sources have told the BBC that the proposals have been updated six times since the leaked document was written in August and although the broad principles in it are correct, it has yet to be discussed by the cabinet.

Lord Green, of the Migration Watch pressure group, said: “These proposals rightly focus on low-skilled migration and by doing so could reduce net migration from the EU by 100,000 a year over time.”

UKIP also welcomed the proposals, saying they should be implemented “without fudging” – but Labour MP Yvette Cooper said they appeared to fly in the face of Home Secretary Amber Rudd’s commitment earlier this summer to consult on a post-Brexit immigration system.

The TUC said the “back of the envelope plans” would “create an underground economy, encouraging bad bosses to exploit migrants and undercut decent employers offering good jobs”.

Lib Dem leader Sir Vince Cable claimed Theresa May had suppressed “up to nine reports” showing immigration did not hit the wages or jobs of existing UK workers when she was home secretary – claims denied by Downing Street.

Italy’s minister for European Affairs, Sandro Gozi, has described the proposals as “very restrictive and unacceptable”.

He told the BBC News Channel that it was “the wrong direction in our analysis” and “we won’t be ready to negotiate along those lines”.