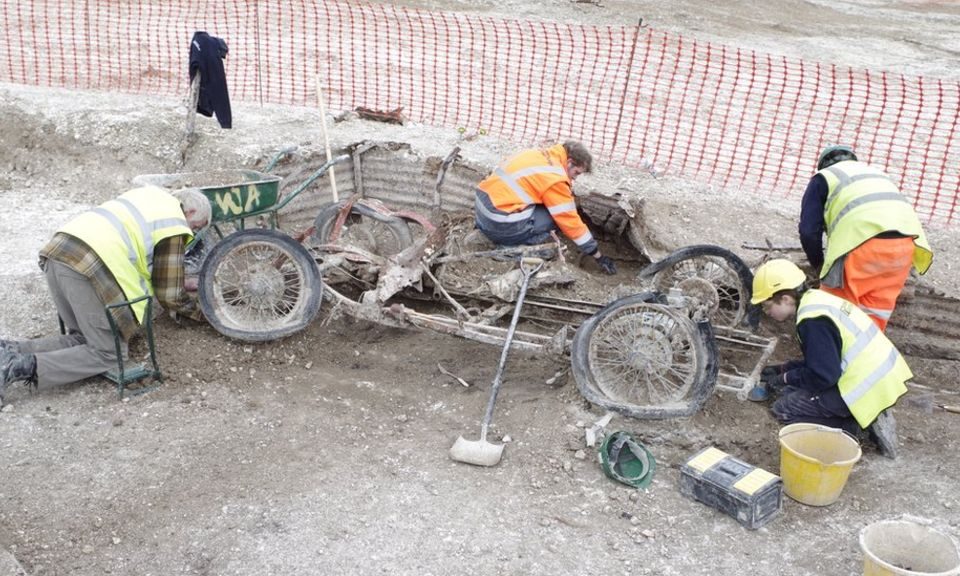 The remains of a MG roadster have been unearthed by archaeologists excavating a former military site.

The 1932 MG J2 was found within a World War Two artillery position during excavations at Larkhill on Salisbury Plain.

It is believed to be a pool car used by troops training in the 1960s which was dumped in a disused weapons pit.

Damien Campbell-Bell, of Wessex Archaeology, described the find as “a real surprise”.

“This particular MG J2 is pretty rare and was one of only 2,083 of this model ever made,” he said.

“We can tell from the tyre pattern the car was probably in use until the early 1960s, at which point it seems to have been placed in the artillery position.”

Mr Campbell-Bell said he thinks the car had been dismantled for repair by a local soldier, but was then seemingly abandoned.

The Larkhill site is one of a number of areas on Salisbury Plain which will see troops re-accommodated in the UK from Germany under the Army Basing Programme.

Environmental consultancy WYG has been employed by the Defence Infrastructure Organisation to survey the development site as part of the planning process.

WYG archaeologist Martin Brown said: “The MG is a particularly exciting find in that it shows the unrecorded side to life on an army camp.

“As a buried artefact it almost conforms to the urban myths of buried tanks, aircraft and equipment one hears about.”