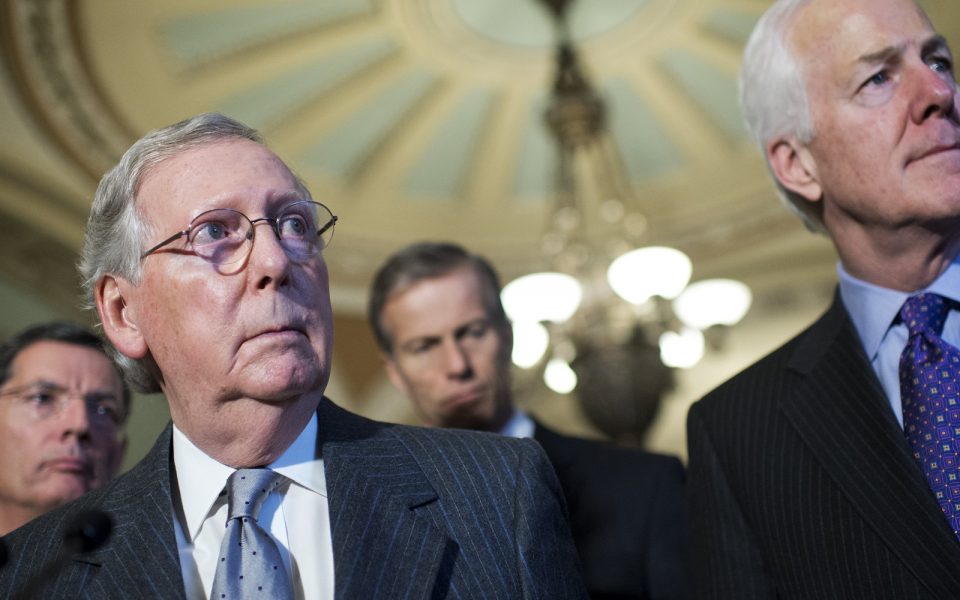 WASHINGTON Heres a not-so-reassuring thought about President Donald Trumps strikes against Syria: Even though most members of Congress praised him for punishing Bashar Assad, none of them actually knew the legal and constitutional rationale that supported the action.

And few of them seemed especially concerned about what a president already criticized for chaos and impulsiveness might use that power to do next.

Asked what constitutional and legal authority the president used to fire 59 $1 million Tomahawk missiles at a Syrian airport and whether he was concerned how Trump might use that authority in the future Senate Majority Leader Mitch McConnell (R-Ky.) ducked.

I think the president had the authority to do what he he did, McConnell said, without elaboration. And Im glad he did it.

The No. 2 Republican in the Senate, Sen. John Cornyn of Texas, was similarly pleased that Trump retaliated for an alleged chemical bombing this week that killed dozens of civilians. But when he was asked for the U.S. rationale, Cornyn showed why McConnell may have declined to elaborate.

Ill tell you there is a desire to see what authority that the administration is claiming to operate under so far whether its based on his powers as commander-in-chief under Article II to deal with the national security interest, or to defend the interest of the United States, or whether theres more, Cornyn told reporters after a briefing from Gen. Joseph Dunford, chairman of the Joint Chiefs of Staff.

Other senators who supported the strikes werent worried about the authority issues.

Ill let the international lawyers look at the details of how they view it, said Sen. Dan Sullivan (R-Alaska).

It can be argued on both sides, Tester told reporters. I think we need an [Authorization for the Use of Military Force] that actually addresses this issue. We dont have one right now.

Some senators had their own ideas for why they believe the administration was acting legally.

Some reasoned the strike was permitted under the 2001 AUMF that Congress passed after the 9/11 terrorist attacks, although that was aimed at al Qaeda and its affiliates, not the Syrian government.

Others said Trump is authorized to take such a step under Article II the Constitution, which grants the president his commander-in-chief military powers.

I believe the president does have inherent authority. I think the president should be able to act, said Sen. Ben Cardin (D-Md.), the top Democrat on the Senate Foreign Relations Committee.

The president is commander-in-chief, said Sen. John McCain (R-Ariz.). Its the same rationale that Ronald Reagan used after there was a bombing of a bar, a disco in Berlin, and he struck Libya. This is not the first time a president of the United States has acted militarily in response to a crisis, and a necessity for us to react.

If there was no clear agreement on what authorized Trumps attack, there was an even greater divergence of opinion on what comes next, or what the Trumps undefined authority might allow him to do in Syria, or perhaps North Korea or Ukraine.

I cant parse that, said Sen. Sheldon Whitehouse (D-R.I.), who backed Trumps attack. Thats a big and complicated question, and not one that I can elaborate.

Many senators did warn that Trump should get a new AUMF from Congress, although there was also little agreement in defining what should be authorized.

McConnell said any authorization should let Trump do more.

If the president can think up some AUMF that he thinks that strengthens his hand, Id be happy to take a look at it, McConnell told reporters.

The Republican chairman of the Senate Foreign Relations Committee, Sen. Bob Corker (Tenn.), said Trump does need a new authorization if he wants to act much further against Assad, and he suggested it should be detailed.

If its going to be something much more extensive, that would need certainly a lot more consultation and an understanding of what the endgame is, which we havent had in prior AUMFs, Corker said.

Corker said he expected the administration to outline the basis for its authority when Dunford briefed senators, but no explanation was offered.

Nevertheless, like other supporters of the action, Corker was not worried that Trump might go off the rails.

I dont think youre seeing the beginnings of some willy-nilly effort. Thats not whats happening here, Corker said.

While there seemed to be little cohesion among the supporters of the strikes regarding all those troublesome details, opponents had a very clear tale to tell.

Sen. Tim Kaine (D-Va.) was adamant that Trump cant launch such attacks simply because hes the president, and that the 2001 AUMF in no way covers a massive missile launch against a sovereign government.

The Article II powers, by longstanding clear interpretation, allow the president to take unilateral action to defend the United States against an imminent threat. Theres no suggestion that this was the case, Kaine said.

The reason that you have a process that Congress has to declare first is to stop a president from just feeling like he can do whatever he wants, Kaine continued. The president has already, in 75 days, conducted the first ground operations in Yemen, the first ground operations in Syria and now air attacks in Syria. At the beginning of an administration, its time to get it right or its going to race away from us and well regret it.

Sen. Chris Murphy (D-Conn.), who warned that bombing Syria would not be legal just hours before Trump did it, said Americans should be very concerned about what the president will do next.

If the president gets away with taking this action against the Syrian regime without a congressional vote, there is no end to the executive power over the military affairs, Murphy said. If you dont need authorization to strike a foreign government with no imminent threat to the United States, then when will Congress ever have to weigh in on military action overseas? I think this is a turning-point moment for the role of Congress setting foreign affairs.