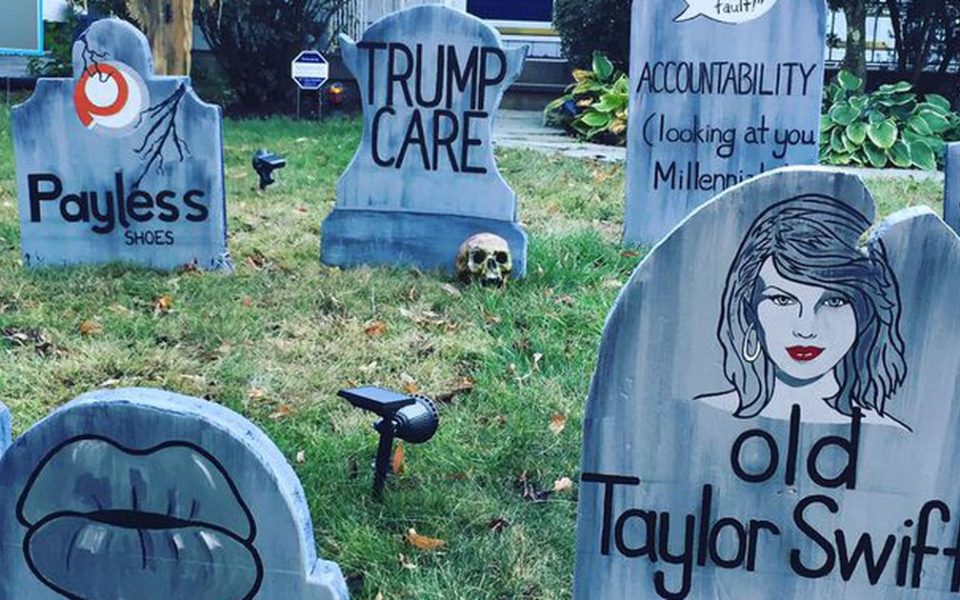 Aside from the scary movies, costumes, and cool weather, one of the best things about Halloween are people’s house decorations.

And one dude decided to use his spooky decorations to comment on pop culture.

SEE ALSO: Take a peek at our top five horror flicks of all time… if you dare!

Michael Fry, 39 from Mamaroneck, New York, was inspired by Disney World’s Haunted Mansion gravestones to create his own graveyard on his front yard, except these have a twist—Fry’s graveyard is made up of pop culture trends that are dead or dying out in 2017.

He wanted the gravestones to be funny and unique and decided pop culture was the way to go.

Fry, who’s an art teacher and parent, had lots of help from his students and family who help with the trends and inspire it.

He told Mashable, “As a teacher, I see students dabbing all the time and I see homemade slime brought into my classroom all too often. So those two are my own wishful thinking that they will die.”

He incorporated politics, fashion, and things we’ve seen this year either online or in the entertainment industry.

Fry even made a crack at some of the things we love, but we’ll allow it.

This isn’t the first time he’s gotten creative with Halloween. Last year, he also had a pop culture cemetery, and he added a skull for his house’s entrance, which his daughter helped him paint.

Overall, this is one great example of Halloween done right.

WATCH: This adorable napping baby has no idea her mom is dressing her in incredible costumes