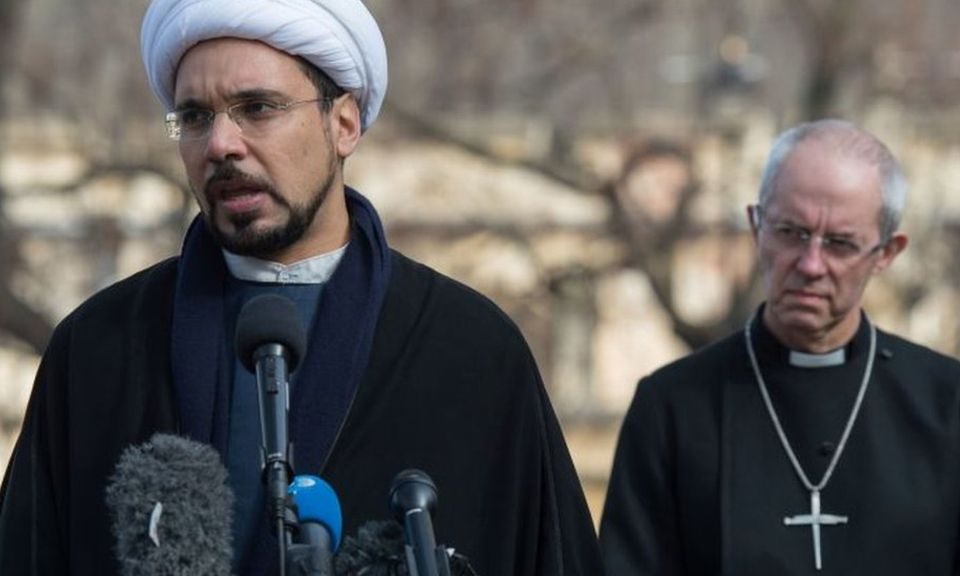 Following the recent attack in Westminster, the temptation to increase tensions between Christianity and Islam was rejected almost immediately.

It began with a vigil outside Westminster Abbey, only two days after Khalid Masood’s murderous attack that took the lives of four people, including PC Keith Palmer, and injured more than 35 others.

The Archbishop of Canterbury, the Roman Catholic Archbishop of Westminster, the Chief Rabbi and two British imams gathered on Westminster’s North Green, embodying interfaith unity in the shadow of a horrifying attack.

“We are each drawn from the historic Abrahamic faiths,” said Archbishop Justin Welby, “faiths that teach the primacy of love and compassion over antagonism. We have come together to push for a more peaceful future.”

It was an immediate effort to reject the narrative that Khalid Masood was an agent of Islam at war with the Christian West.

Two days later, a line of almost 100 Muslim women held hands on Westminster Bridge, bowing their covered heads in silence as Big Ben struck 16:00 BST on the first Sunday following the attack. Again, the message they sought to convey was one of unity, as opposed to enmity, between religious traditions.

But last Saturday, around 300 people gathered under a different banner. Members of Britain First and the English Defence League congregated on Victoria Embankment for what they described as a “march against terrorism”. Paul Golding, the leader of Britain First, began by reciting the Lord’s Prayer.

The attempt to categorise acts of terror as representative of the Islamic faith has gained much less traction here in the United Kingdom than it has in the United States, where it became one of Donald Trump’s signature themes throughout his presidential campaign. He repeatedly castigated former President Barack Obama for his refusal to use the phrase “radical Islamic terrorism”.

But President Obama, from the outset of his presidency, sought to calm tensions with Islam. His first overseas visit in 2009 was to Cairo University, where he offered a fresh hand of friendship.

“I have come here to seek a new beginning between the United States and Muslims around the world,” he explained, “one based upon mutual interest and mutual respect and one based upon the truth that America and Islam are not exclusive and need not be in competition.

“Instead, they overlap, and share common principles – principles of justice and progress, tolerance and the dignity of all human beings.”

This Wednesday, both the Protestant and Roman Catholic Churches in Britain will continue to press the case for engagement, as opposed to antagonism.

At 12:00 BST, the Duke and Duchess of Cambridge will attend what is billed as a Service of Hope at Westminster Abbey, which will bring together representatives of all those who were touched by the events of 22 March. The Archbishop of Canterbury will preach.

The Dean of Westminster, the Very Reverend Dr John Hall, looking ahead to the service, said: “The random and vicious attack on Londoners and visitors to these shores has bewildered and disturbed people of every background and belief. And we shall commit ourselves afresh to working together to bring hope.”

The Archbishop of Westminster, Cardinal Vincent Nichols, will embark upon a more adventurous pilgrimage. He will take four British imams to meet with Pope Francis at the Vatican, also on Wednesday. The BBC has been invited to travel with the cardinal’s party.

“Pope Francis is committed to engagement,” the cardinal says. “When he was archbishop of Buenos Aires, he repeatedly visited mosques and engaged with the Muslim community. And his willingness to welcome our British imams is a further sign that he regards interfaith dialogue as being of the utmost importance.”

To further emphasise this commitment, it has just been announced that Pope Francis will travel to Egypt later this month. In a statement, the Vatican said the Pope had accepted an invitation from President Abdel Fattah al-Sisi, Roman Catholic bishops, the leader of the Coptic Orthodox Church of Alexandria and the grand imam of Cairo’s Al-Azhar mosque.

None of these meetings is intended to deny the profound theological differences that exist between these faiths, especially where it concerns the uniqueness and divinity of Christ.

But by continuing the dialogue, these faith leaders are sending a clear message to the communities they serve: that faith without works is dead and that dialogue must always trump conflict.