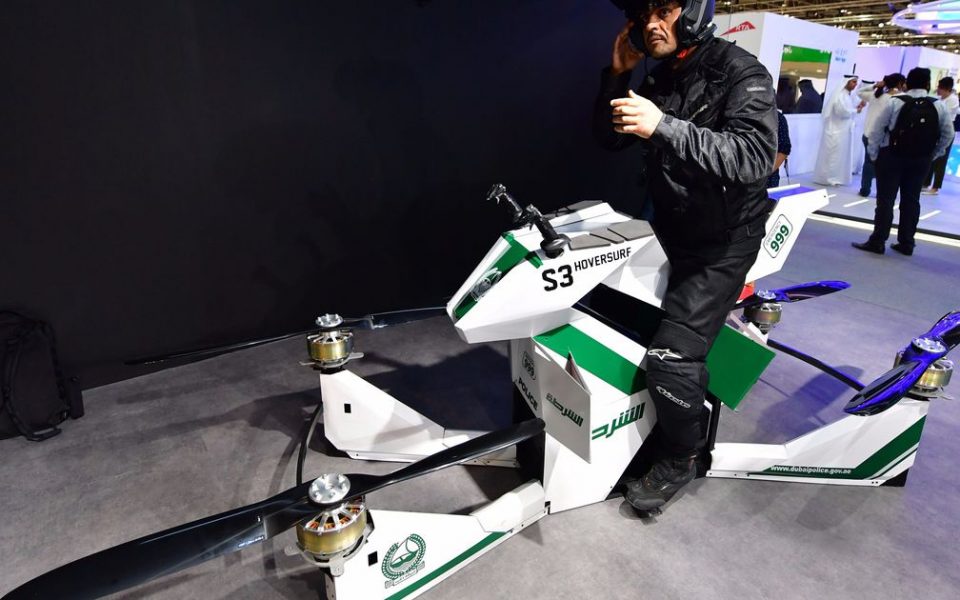 Dubai police will soon zoom around the sky on hoverbikes

Dubai is aggressively turning itself into a “Future City,” putting self-flying taxis in the skies and a facial recognition system in its airport. The Dubai police department’s latest ride is now adding another sci-fi transportation staple: the hoverbike.

The Dubai police, which already has luxury patrol cars, self-driving pursuit drones, and a robot officer, just announced it will soon have officers buzzing around on hoverbikes, which look like an early version of the speeder bikes used by the scout troopers on Endor in Return of the Jedi.

The force (see what I did there?) unveiled its new Hoversurf Scorpion craft at the Gitex Technology Week conference, according to UAE English language publication Gulf News. The police force will use the hoverbike for emergency response scenarios, giving officers the ability to zoom over congested traffic conditions by taking to the air.

SEE ALSO: Airbus is working on a self-flying taxi, and the prototype could fly as early as 2018

The Russian-made craft is fully electric and can handle loads of up to 600 pounds, offering about 25 minutes of use per charge with a top speed of about 43 mph. The Scorpion can also fly autonomously for almost four miles at a time for other emergencies.

You can check out what it’s like to take a quick spin on the craft in the video below.

One of Hoversurf’s concept vehicles, the Scorpion-3, featured a a built-in safety system during its development that kept the pilot from losing control and going too fast or too high, but it’s unclear if the model the Dubai police is adopting will have those safeguards.

Hoversurf CEO Alexander Atamanov announced on Facebook the company and the Dubai police have signed a memorandum of understanding that will allow Hoversurf to begin mass production of the Scorpion crafts in the Dubai area to serve the department.

WATCH: A flying taxi has taken to the skies for the first time