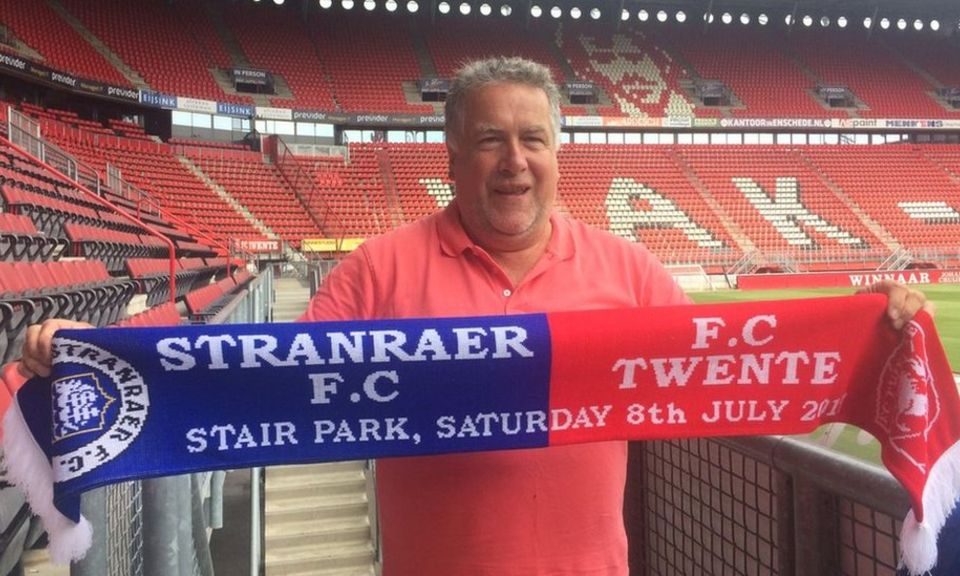 Scottish League One outfit Stranraer are playing host to Dutch top division side FC Twente thanks to links which started with a fan’s dying wish.

The match, which kicks off at Stair Park at 15:00, is expected to be attended by hundreds of visiting fans.

His dying wish was to see an Old Firm game, which they managed to arrange.

Mr McKie and his friend James Hilton, 61, a Stranraer and Celtic fan, got hold of tickets for Mr van Unen and when he arrived in Glasgow for the game they took him on tours of Ibrox, Parkhead and Hampden.

The fixture this weekend marks a decade since Mr van Unen’s death from skin cancer aged 34.

Links between the two clubs, some 520 miles apart, have remained strong since with Saturday’s game the latest example.

Mr McKie admitted he was surprised the Dutch side agreed to take part.

He said: “To be honest, when I asked them if they would come I was almost sure they would say: ‘No, we can’t come.'”

“They said: ‘Yes, we are coming and we are bringing the full squad – 27 players, all the coaches, everything.'”

He said he and Mr Hilton had never imagined what helping Mr van Unen could have led to.

“It is huge, it is amazing just how it has come by one simple act,” he said.

“James and me feel very humble about the whole thing – it is difficult at times to talk about.”

However, he said that the surroundings of Stranraer’s ground had come as something of a surprise to their more illustrious opponents.

“When they sent one of their team managers across to look at the facilities I could see the shock on her face,” said Mr McKie.

“Stair Park is old school – but these guys like old school.

“They like the fact that it has not been modernised, it is not a 3G pitch – everything has been left as it is.”

Stranraer chairman Iain Dougan said it was “incredible” to finally have the two teams meet on the pitch.

“The boys are really looking forward to it and even though it’s a friendly, they’re probably one of the biggest opponents we’ve come up against,” he said.

“We’re expecting the stadium to be packed with supporters from both sides, and businesses in the town will benefit as a result.”

A memorial tournament is played every year at FC Twente in honour of Mr van Unen and another fan Boris Dijkhuizen, which Stranraer youth teams regularly participate in.

Jan van Halst, technical director at the Dutch side, said: “It’s fantastic that the Scottish FC Twente supporters have helped to arrange this fixture.

“What started with a last wish from supporter Dennis van Unen has now become a close friendship between FC Twente and Stranraer.”

He said they were looking forward to a “very special friendly match” in Scotland.