Previous postDownload this: Plotagraph will help you level up your Instagram game
Tesla finally shows off the Model 3's stunningly minimalist interiorNext post 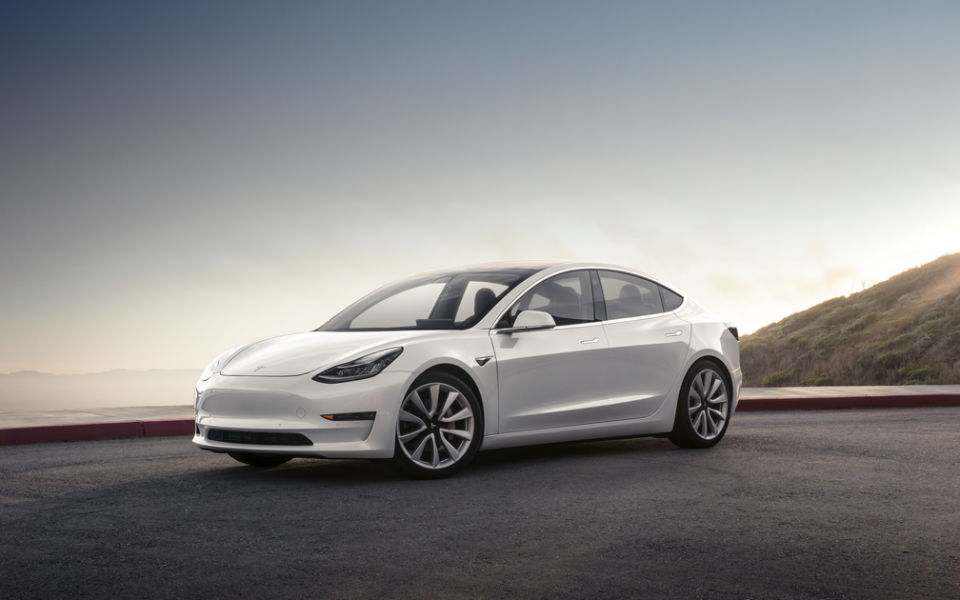 I drove a Tesla Model 3, and it was pretty damn awesome

Those were my initial thoughts after test-driving one of the very first Tesla Model 3 all-electric cars to roll off the assembly line Friday before the company’s big reveal.

That exhilarating, yet short-lived experience, started inauspiciously. In fact, I was prepared to be underwhelmed. I mean, it’s just a sedan, right?

From a distance, the Tesla Model 3 looks like most other small sedans on the road.

SEE ALSO: We finally know what the inside of Tesla’s Model 3 looks like, and it’s stunning

It was not until I got close to the Model 3 and started examining the all-electric 4-door sedan, which starts at a mid-range-friendly $35,000, that I noticed the mostly subtle differences.

If the gorgeous Model 3 exterior is only subtly different from your average sedan, the Model 3 interior is like a cockpit from the future.

I quickly noted the snub-nose, grill-free front (no motor up there, so no need) and the mostly glass roof. I’d been told the handles weren’t automated as they are on the $72,000 Model S, so I was surprised to find them still flush with the car body. To open the car door, I had to press one side of the chrome handle, which made the other side pivot out toward my hand. Then I grabbed the extended handle and pulled.

If the gorgeous Model 3 exterior is only subtly different from your average sedan, the Model 3 interior is like a cockpit from the future.

Tesla reps had warned that the interior is minimalist, and they were not kidding.

I entered the car (despite a low center of gravity, I did not feel like I was climbing down into it) and immediately marveled at the comfort. It felt like leather, but the seats and steering wheel are actually covered in Tesla’s own specially-designed material. It felt wonderful under my hands and the seat, which hugged my back and bottom, felt smooth and comfortable.

The most startling thing about the interior, though, is that when I looked right through the steering wheel to the dashboard, there was nothing to see. The only screen is a 15-inch wide-screen LCD panel that extends from the middle (left to right) of the dashboard. I’d say the top third of it is almost at eye level.

Yes, this is where you’ll glance to see your speedometer, battery charge level, and drive distance remaining.

I have to admit, this was a little disconcerting, but Tesla execs insist that most people get used to it quite quickly.

A new kind of dash

That screen is also home for virtually all your compartment controls, as well as where you’ll find your navigation.

The controls, though, are really something else.

On the Model 3 Steering wheel are two small dials. Each is positioned so you can reach them with your thumbs while still holding the steering wheel. They have a number of uses.

We changed a setting on the screen, and then I used the dials to adjust the position of my steering wheel, scrolling the left side to adjust the height and the right to telescope in and out. It was so cool and, I assumed, a more complex way of handling manual steering wheel adjustment. However, Tesla execs explained this takes fewer parts and is just another way they simplified production.

Those same buttons are used to adjust the side view mirrors; the left controls the left mirror and the right, well, the right one. To tilt the mirrors in or out, I simply pulled and pushed on the dials.

I sat back in the car for a moment and glanced at the natural wood-covered dash. I noticed how far back it sits, giving the impression of a much-roomier car interior, Just below the wood is a dash-wide slot for the ventilation system. I put my hand up and felt cool air blowing toward my face.

On the dashboard screen, there was an unusual-looking control: a circle floating above a thin line in a sea of white. I could drag the circle around the screen, above, below, and on the line. As I did this, the angle of the air coming out of the vent shifted. If I moved the circle up, the vent blew the air toward the roof of the car, pulling it down, pushed air toward my lap. I could also slide it along the thin line to point the air stream at me or my passenger. In addition, the stream could be splint into two separate air flows, but only as mirror images of each other. When I pulled out one, the other shifted to the outer edge of the dash.

Above me was the all-glass roof, available only in the long-range model, and behind me and over the rear passenger’s heads was the rear window glass that extends up toward the roof. This makes the rear compartment feel much more spacious, though there isn’t much Tesla can do about the leg room back there which still felt cramped.

It was time to drive. I hesitated to tell the Tesla execs accompanying me that I had never driven an all-electric car. I’ve ridden in a few, but driving one is a different experience.

To start the car, we used, naturally, an app. For valet drivers there’s an NFC card you can hand them, that they use to unlock the car, by swiping the card along an area on the door exterior, and then turn it on.

The Model 3 has a transmission control quite similar to the Model S. The tiny automatic transmission stick extends from the steering wheel. A couple of presses down puts the car in drive.

If you’ve never ridden in or driven an electric car, the lack of rumble or movement when the car is idling can be disconcerting.

I put my foot on the brake and prepared to drive, trying not to grip the steering wheel too tightly. I kept thinking, They’re just going to let me drive away in this thing?”

I pressed gently on the “gas” and the gray Model 3 sedan pulled silently away from the curb.

Then I pressed a little harder on the gas and the car lurched forward. Electric motors can take a bit of getting used to. Unlike a gas engine, there’s no spinning up the full potential, the motor simply responds with a big Yessir! and you’re off. I adjusted my lead foot.

The other big surprise was how the Model 3 felt when I took my foot off the gas. It slowed down like I was applying the brake. This is by design. The slow down is generating fresh electricity for the batteries, which can help for extended drives. Fortunately, you can turn this off, which makes the ride smoother, if a little bit shorter.

The ride felt smooth and tight, but in a good way, the way all small sedans should feel. I loved the responsiveness and how it seemed to hug the road, which is partially because the Model 3 has a low center of gravity, with the batteries situated directly beneath me.

As I drove, I kept glancing at the center panel to keep track of my speed. It was a little odd, but I started to get used to it. That same screen had a tiny battery indicating remaining battery life. This is not, thank goodness, the final dashboard screen software. Eventually the Model 3 screens will have a large battery readout and miles-remaining.

Apparently those employees getting the first 30 Model 3 cars on Friday will see this version of the software and help beta test dashboard updates as they arrive, before consumers get their hands on the finalized sedans.

What I wasn’t enjoying was the turn signal. I could never tell when I had turned it on. It didn’t seem to click in place. I also had a hard time hearing it and not because the car is loud inside. It’s actually quiet. I could barely detect road sounds.

Speaking of sounds, the $44,000 model comes with a custom sound system designed by Tesla, which was excellent.

After driving around for 15 minutes or so, I returned the Model 3 to Tesla’s Fremont Plant lot, relieved I hadn’t run into something.

Before I left the car, I took another look around. I noticed the rearview mirror, while manually controlled, had unusual-looking glass on it, which turned out to be electro-reflective, auto-adjusting when it detected the shine of headlights.

There were also dual microphones right above in the ceiling for Bluetooth calling.

In between the two front seats was an armrest, which hid a spacious compartment. Under the dash, the center opened to reveal space for two iPhone 7 Plus-sized phones. There were also dual USB ports.

There’s also a pair of all-important cup holders in the center, one on each door and another pair in a foldout center panel in the rear compartment.

I got out and stepped back into the rear passenger seats. While the huge glass rear window does provide more space, it also conducts more heat. It was almost uncomfortably warm back there.

Outside the car again, we opened the trunk. It has ample space and even a hidden compartment that opens up to the base of the car chassis. My only complaint is that the trunk opening seems a bit narrow.

Under the hood up front is another space, designed to be large enough for any luggage that can fit in the overhead compartment of an airplane. It even had a little hook shopping bag handles.

Honestly, my drive felt all too short and there’s no way to fully review an electric car without a few extended drives, but my first impression is positive.

The Tesla Model 3 is a well-designed, mid-sized sedan that managed to simplify the Tesla design ethos with luxury in mind and without making it feel any less a part of the Tesla family.