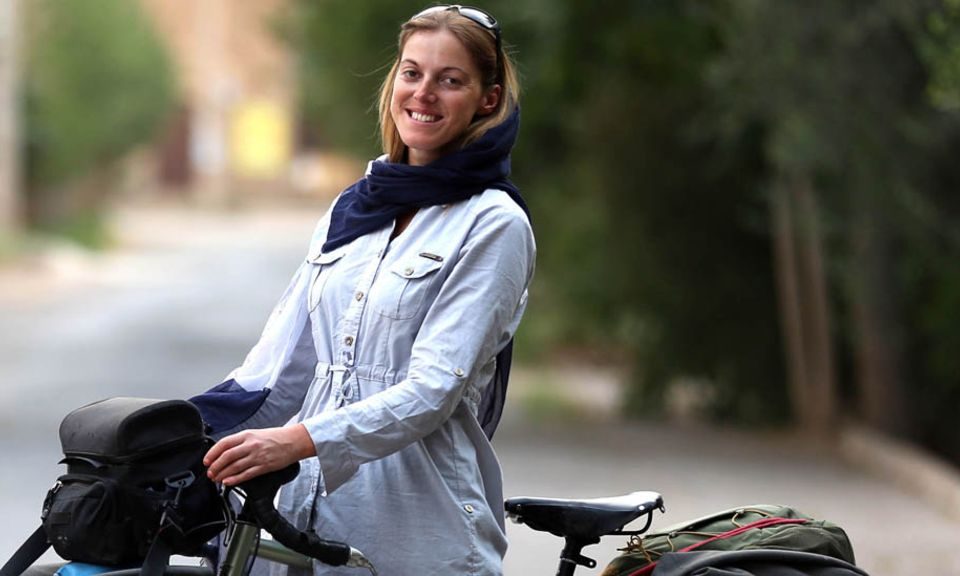 Is it foolish for a woman to cycle alone across the Middle East? – BBC News

When Rebecca Lowe set off solo from the UK for Iran by bicycle, her friends thought she had taken leave of her senses. But although she had to endure gropers, extreme heat and heavy-handed police, most of the people she met were a long way removed from stereotypes.

I wasn’t fit. I had never used panniers. I had no sense of direction. It was six years since I had last ridden up a hill.

But for all my doubts, I was dedicated to the task at hand. My aims were simple: develop enviably shapely calves, survive and shed light on a region long misunderstood by the West.

Mostly, I wanted to show that the bulk of the Middle East is far from the volatile hub of violence and fanaticism people believe. And that a woman could cycle through it safely.

Not everyone had faith in my ability to do so, however. “We think you’ll probably die,” one friend told me before I left. “We’ve put the odds at about 60:40.”

Others were less optimistic.

A man in the pub said I was a “naive idiot who would end up decapitated in a ditch – at best”. A good friend sent me a copy of Rudyard Kipling’s If, stressing the importance of keeping “your head when all about you / Are losing theirs”.

Yet I remained tentatively confident. The region may be politically precarious, but the people I knew from experience to be warm and kind.

Crime rates were low and terrorist strongholds isolated and avoidable. Even exposed on a bike, I felt my odds of staying alive weren’t bad.

I’d chosen a bicycle for its simplicity and slowness of pace, and its immersive, worm’s-eye view. On a bike you don’t just observe the world but are absorbed within it. You are seen as unthreatening and endearingly unhinged, and are welcomed into people’s lives.

I set off in July 2015. Over the next four months I inched my way with sluggish determination across Europe.

As summer bled into autumn, my stamina gradually grew – along with my thighs. By Bosnia they were formidable. By Bulgaria they had developed their own gravitational field.

But leaving Europe was nerve-wracking. I was now outside my comfort zone, in the relative unknown.

In front of me lay Turkey, Lebanon, Jordan, Egypt, Sudan, Oman, the UAE and Iran. Pre-warned about men, terrorists and traffic, I began the Asian leg of my journey with caution.

I swiftly relaxed, however. A truck driver stopped just to hand me a satsuma. A cafe owner gave me his earmuffs. Dozens of others offered food, water, lifts and lodgings, and endless varieties of kebab.

Throughout the Middle East, it was the same. Doors were forever flung wide to greet this strange, two-wheeled anomaly who was surely in need of help, and possibly psychiatric care.

My hosts varied widely: rich and poor, mullahs and atheists, Bedouin and businessmen, niqab-clad women and qabaa-robed men. Every person and community was different, but certain traits linked them all: kindness, curiosity and tolerance.

In Sudan, families fed me endless vats of ful (bean stew) and let me sleep in their modest mud-brick houses. One Nubian family gently restored me to health after I ran out of water in the Sahara and collapsed, vomiting and delirious, on their doorstep: the lowest point of the trip, and the only time I experienced true panic.

Iranian hospitality felt like a soft protective cloak, omnipresent and ever-reliable. So much wonderful, impractical food was given to me by passers-by – watermelons, bread, bags of cucumbers – that much had to be discarded.

Persian culture pulsed with contradictions. On my first day, the police admonished me for removing my headscarf in blazing heat under a tree. Minutes later the officer’s sister-in-law was serving me khoresh gheimeh (lamb and split pea stew) in her nearby bungalow.

The trip was not all blissfully trouble-free, of course.

There were the sex pests, for a start. In Jordan, Egypt and Iran, I was groped, ogled and propositioned with disappointing regularity.

In Egypt, one randy tuk-tuk driver got his comeuppance following a juicy bum squeeze by being beaten to a pulp by the police convoy on my tail – my horror at their brutality only outdone by my undisguised glee.

In Jordan, a truck driver who’d picked me up following a puncture repeatedly asked for kisses and grabbed my breasts. Fortunately his bravado ceased abruptly at the sight of my penknife wafting ominously close to his crotch.

Such incidents angered me intensely, and were often frightening and unsettling. Lechery is hardly a preserve of the Middle East, but there were areas where strains of patriarchy and entitlement ran deep.

I realised quickly, however, that these men were not monsters. They were ignorant and often ill-educated. Not to mention severely sexually frustrated within a culture where physical intimacy is shameful and stigmatised.

They were more cowardly opportunists than malicious aggressors, and it was usually easy enough to send them scuttling cravenly on their way.

Toilets were a serious concern. In the remote gold mining regions of northern Sudan, where few women ventured, there simply weren’t any.

“Look around you,” a man at one roadside shack told me, gesturing to the entirely exposed desert behind him. “The Sahara is your toilet.”

The most worrisome issue, however, was political. Across the region, repression was palpable, and foreign journalists clearly weren’t welcome.

Don’t tell the authorities your profession, I was told, or others would pay the price too. I took this advice – yet it was hard to feel at ease.

In Egypt, ruled by a heavy-handed military regime, tourists were tightly controlled and protected. The police were suffocating in their oversight, escorting me 500 miles (800km) down the Nile and aggressively grilling everyone I met.

In Iran, I was given more freedom. Yet foreigners are not permitted to stay with locals without permission, and several of my hosts endured an intense grilling by police. Some of those aware of my profession declined any contact at all due to fear of repercussion.

In Turkey, pro-Kurdish human rights lawyer Tahir Eli was killed by an unknown gunman a few days after we met. In Sudan, two students were killed in clashes with regime forces and supporters during my brief stay in Khartoum.

In Jordan and Lebanon, refugee camps were visibly struggling to cope with the growing numbers of Syrians fleeing war.

The enduring impression was a region in crisis, stretched hopelessly between tyranny and terror. Yet there was light along the way – and that light was the people.

“The world shouldn’t judge us by our politics,” a member of the Center for Civil Society and Democracy, a Syrian activist group I spent Christmas with, told me. “We hate our politics. We should be judged by ourselves.”

And that, for me, is the nub of the matter.

The Middle East is a risky place, but the risks are primarily political. Beyond the pockets of conflict and terror highlighted daily in the media lies a broader reality: that of warm, compassionate communities living normal, everyday lives.

So is it safe for a woman to cycle alone across the Middle East? With the right precautions, yes.

Would I let my daughter do it? Absolutely not in a month of Sundays – are you mad?