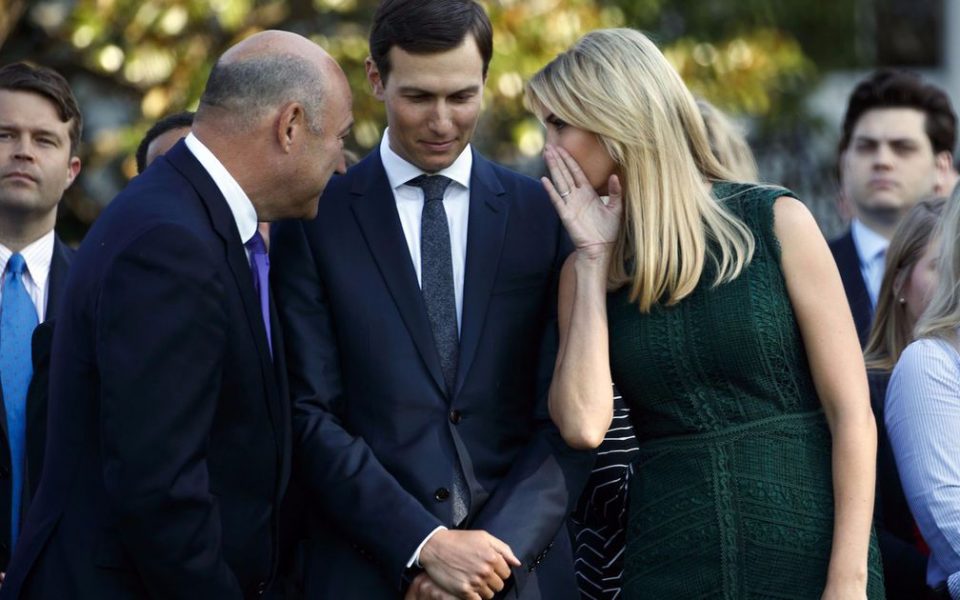 Jared and Ivanka used private email addresses for White House business, and we wish we could forward them spam

"No, it's 'Eric-underscore-Is-underscore-Stupid at gmail dot com,' not dashes."
Image: AP/REX/Shutterstock

As it turns out, President Donald Trump’s daughter Ivanka and son-in-law Jared Kushner have been conducting White House business on their own private email accounts.

SEE ALSO: Here are all the deportable offenses Trump’s crappy children have committed

Politico broke the scoop on Jared’s email on Sunday, noting that the address was created in December — you know, just a month or so after Big Papa Trump rode a wave of controversy over Hillary Clinton’s private email server to an electoral victory — while the incoming administration’s transition was underway and was “part of a larger pattern of Trump administration aides using personal email accounts for government business.”

Congressional Dems are sure as hell interested, that’s for sure.

Then Newsweek shared news of Ivanka’s email shenanigans on Monday, just one day later, citing information uncovered by the nonpartisan American Oversight via some Freedom of Information Act (FOIA) requests.

Breaking: Ivanka Trump used a personal email account at the White House according to emails obtained through #FOIA by American Oversight https://t.co/xsUwV1KXIw

In response the family has bent over backwards to try to play the “THIS IS NOT A PROBLEM” card. Kushner’s attorney told Politico that “fewer than 100 emails” coming from Jared’s personal account were mostly “news articles or political commentary,” and sometimes people sent him an email first and, ya know, he was just replying, so it’s fine!

With regard to Ivanka, the White House told Newsweek Ivanka sent an email on February 28, 2017, before she was officially a federal employee so she should be in the clear even though she was sitting in on White House meetings and greeting foreign dignitaries alongside her father for months beforehand.

Poor attempts at syntax gymnastics aside, this White House has a growing reputation for using apps and other means of deleting communications that should be covered by the Presidential Records Act.

But I can’t help but get hung up on one thing: What the hell are their private email addresses?

Politico called the setup a “private family domain” which makes it sound not too much unlike Clinton’s “clintonemail.com” server. So it’s possible it’s something very benign like “jared@jared.com” or “ivanka@kushner.com.”

But we’re living in a brave new world. Who’s to say they didn’t set up an email through a third party? Mike Pence once made waves for using an AOL address while governor of Indiana and we know Jared isn’t altogether too thorough in his approach to formality.

If we’re being honest, I feel like if Bing had emails, Jared would have chosen that. And one would assume they’re still hanging on to those “Jared@Russia.gov” and “Ivanka@hotmail.ru” addresses for later use.

But Gmail or Outlook are both plausible ways to go. And, while based on the docs released thus far, we know Ivanka went the single first name route, how about Jared? What would it be like to receive an email from “FuccBoiJ@gmail.com” or “NotComplicit@gmail.com” with the subject line, “SOMEONE TELL ERIC TO SHUT UP”?

We know from Politico that Steve Bannon and Reince Priebus were among those who Jared emailed with from the account so it’s probably safe to say addresses like “BloatedBannon@gmail.com” and “ReinceIsMayonnaise@gmail.com” didn’t make the cut.

There are an endless number of possibilities, each more fascinating than the last. And until we find out the full answer, I’m going to hold out hope it’s the most pure, unfiltered Jared possible, like “JaredTrump@outlook.com” or “JaredTrumpKushner69@jkush.com.”

WATCH: Take a ‘cell-fie’ using your phone and this small microscope adapter