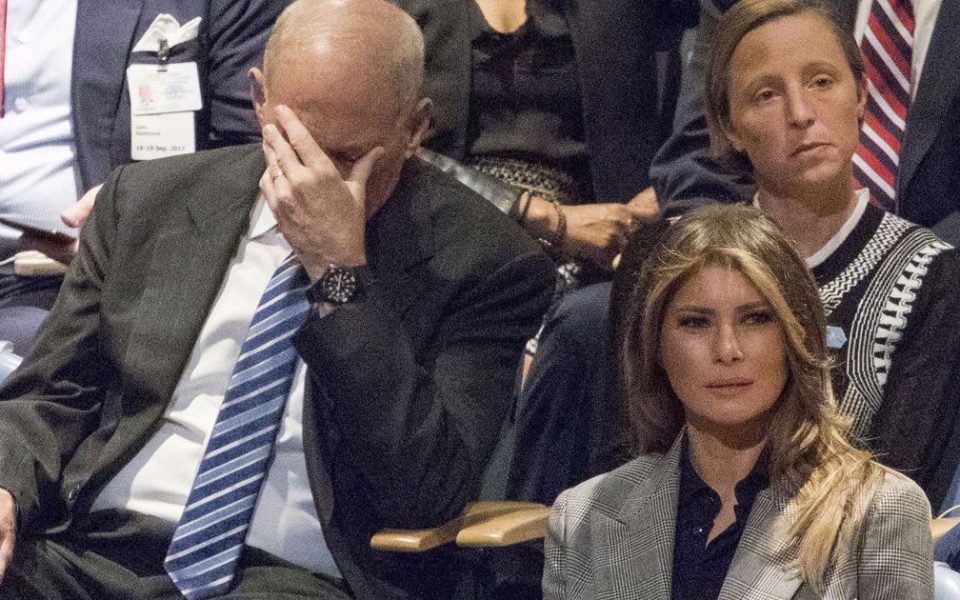 It's as if he's thinking, 'What have we done?!'
Image: AP/REX/Shutterstock

To say John Kelly has an intense listening face would be a severe understatement.

If you don’t believe us, please refer to photographs of the current White House chief of staff taken during President Donald Trump’s controversial speech at the United Nations General Assembly on Tuesday.

After pictures of Kelly sitting in the audience looking like Trump’s words might just cause him to have an emotional breakdown began circulating online, Twitter users saw the meme potential and quickly pounced.

At the UN, Trump basically talked about parts of the world going to hell. He nodded to a future pull-out of the Iran Deal, called Kim Jong-un “Rocket Man,” and threatened to destroy North Korea. An Associated Press photographer caught Kelly reacting during the speech, and it really looks like he went through some feels.

He touched his brows, clasped his hands into a fist, and rested his head in them — as one occasionally does when dealing with an insane amount of stress or sorrow. According to the Toronto Star’s Daniel Dale, the facepalm shot was taken when Trump called North Korea “a band of criminals.”

We lined up the AP’s photo time stamp with the speech. Kelly had his hand on his face after Trump called North Korea a “band of criminals.” pic.twitter.com/MbGqAP6fV2

Many, who were apparently making similar expressions while listening to Trump, called out Kelly’s body language and meme’d away.

John Kelly at UNGA is all of us. pic.twitter.com/Wza8wrzdCY

Welcome to our world, Kelly. https://t.co/OqLElcqHYl

John Kelly looking like his child won’t qualify for the Olympics. https://t.co/0IaStGzBdM

And on top of all that, the babysitter might quit! pic.twitter.com/hC0p7htEyG

Though many saw Kelly’s expression as the terrified face of someone who was just reminded Trump is president, apparently that’s just how the dude listens.

Kelly has been caught on several occasions — including Trump’s bizarre Charlottesville press conference — looking like he hates his job and is about to cry. Though, to be fair, he could suffer from some sort of variation of Resting Bitch Face — which from here on out should be referred to as Resting Kelly Face™.

Still, the two shots taken during Trump’s UN speech seem to have hit a national nerve. Whether Kelly is expressing his inner sorrow or just intently listening, there’s no denying he looks especially unimpressed whenever Trump’s in the room …

WATCH: Melissa McCarthy’s reaction to Sean Spicer crashing the Emmys is all of us