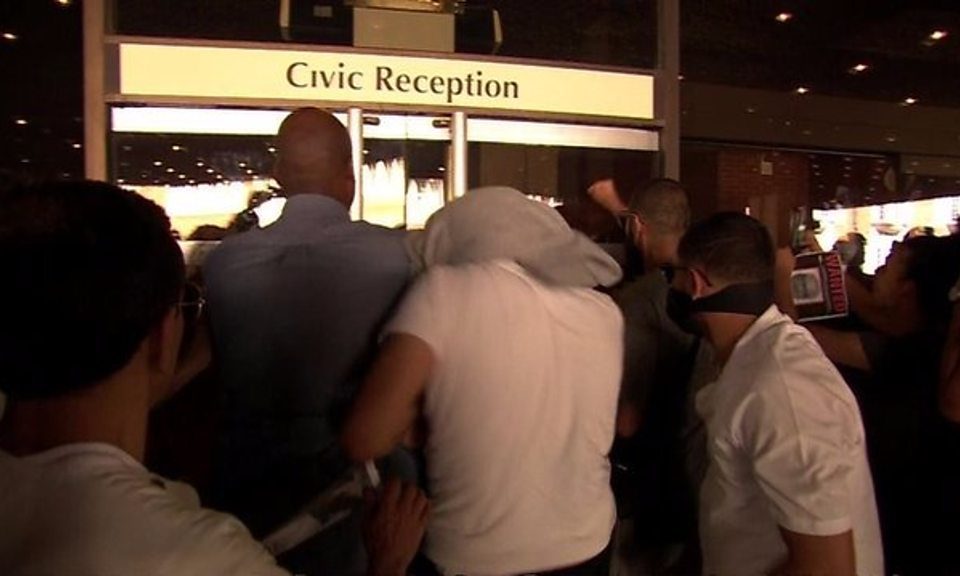 Protests were held in London as residents demanded support for those affected by the Grenfell Tower fire.

Between 50 and 60 people stormed Kensington and Chelsea Town Hall as members of the public said the homeless needed help “right now”.

Crowds gathered outside a hall where PM Theresa May met survivors and protests were also held at Downing Street.

Mrs May sanctioned 5m for clothes, food and emergency supplies, as the death toll rose to at least 30.

The BBC understands those missing could number about 70, with the 30 likely to be among that number. Three of those who died have been identified.

There was nothing to suggest the fire was started deliberately, police said.

Hundreds of mourners stood arm in arm at a vigil and held a two-minute silence for victims of the fire.

Many wept openly as candles illuminated the road outside the Latymer Christian Centre, yards from the site of the blaze.

The fire broke out shortly before 01:00 BST on Wednesday.

It tore through all floors of the building and took more than 200 firefighters 24 hours to bring it under control.

Mahad Egal, who escaped his fourth floor flat with his family, said: “At first it seemed it was controllable, but really quickly the fire started to rise as the cladding caught fire. It is incredible we survived.”

The first protest began at around 15:00 at the town hall and scores later joined it.

At about 16:30, people began to rush up the steps and make their way into the building.

One member of the public said: “Nobody knows what is happening. People are so angry. Those people shouldn’t be sleeping in the street.”

Mustafa Al Mansur, who organised the protest, read a statement from the council which promised to re-house as many people locally as they could and to provide funding for those affected.

But he called the response “flimsy” with “no concrete answers” – especially on the question of number of residents who lived in the flats.

“The people were not satisfied with the answers,” he told BBC News.

“The people were getting frustrated and they walked towards the building. They did not force themselves inside. They got inside the main building and were in the foyer, just speaking.”

Police then arrived on the scene and formed a barricade, which Mr Al Mansur said led to “physical confrontation” between the two sides.

There were then angry scenes outside the Clement James Centre, in North Kensington, where the meeting with the prime minister and residents of the tower had been held.

Dozens of demonstrators surged towards the entrance and there were scuffles outside as organisers appealed for calm.

Mrs May had faced criticism for not meeting with survivors in the immediate aftermath, unlike Labour leader Jeremy Corbyn and Mayor of London Sadiq Khan.

Asked about the reaction of the crowd, Mrs May defended the government’s response.

“What I am now absolutely focused on is ensuring we get that support on the ground,” she said.

“The government is making money available, we are ensuring we are going to get to the bottom of what has happened, we will ensure that people are re-housed. We need to make sure that actually happens.”

Mr Corbyn wrote an open letter to the prime minister, calling for the public inquiry to ensure “all necessary lessons are learned”.

The Labour leader added: “[The inquiry] must be empowered to consider all the steps that were, or were not, taken leading up to and contributing to this most terrible incident.

“It must also identify the urgent steps that need to be taken in relation to fire safety standards for other buildings of this nature.”

Large crowds of people also gathered in Westminster and made their way to Downing Street.

The crowd was heard chanting, “Justice for Grenfell”, along with “May must go” and “blood on your hands”.

A peaceful march started making its way down Whitehall and was halted by police outside Downing Street, before moving to Oxford Circus, where demonstrators carried out a sit-down protest.

The march continued up Regent Street, where they held a minute’s silence outside the BBC’s headquarters, and continued towards Marble Arch and Notting Hill, ending at Lancaster Gate.

The 5m Grenfell Tower Residents’ Discretionary Fund, announced by Mrs May, includes the aim to re-house residents within three weeks as close to where they lived before as possible, to pay for temporary housing in the meantime and to provide extra financial assistance.

During her meeting with survivors, the PM also said they would be consulted on the terms of the public inquiry announced on Thursday and receive state funding for legal representation.

Mrs May said: “Everyone affected by this tragedy needs reassurance that the government is there for them at this terrible time – and that is what I am determined to provide.”

The Queen and Duke of Cambridge also met volunteers, residents and community representatives during a visit to the Westway Sports Centre.

The Queen paid tribute to the “bravery” of firefighters and the “incredible generosity” of volunteers now offering support.

So far in the investigation:

On Thursday, the first victim of the fire was named as Syrian refugee Mohammed Alhajali, 23.

The Syria Solidarity Campaign said Mr Alhajali, a civil engineering student, had been in a flat on the 14th floor when the fire broke out, and had spent two hours on the phone to a friend in Syria.

He had been trying to get through to his family while he was waiting to be rescued.

His older brother, Omar, told the BBC he had lost Mohammed on the way out of the building.

Two other victims have also been named.

Five-year-old Isaac Shawo reportedly got separated from his family in the smoke and later died.

Artist and photographer Khadija Saye, 24, lived on the 20th floor and also died.