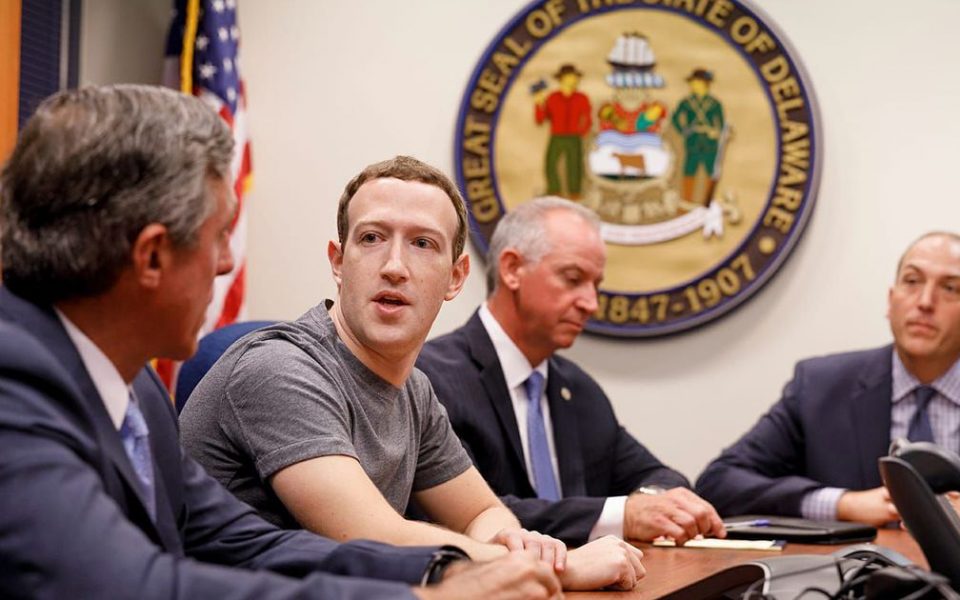 Mark Zuckerberg needs to put on a damn tie

Let’s just say it: Mark Zuckerberg dresses horribly, and he should be ashamed every time he appears in public.

Here is a man in charge of the world’s most important social network — one that probably ended American democracy as we knew it! — and thanks to a general acceptance of his limp-ass techno-bro privilege, he gets away with wearing the same ugly T-shirt and jeans whenever he steps outside. It’s a uniform that says “I’m better than you,” an astonishing hubris in 2017 after his company has done so much to divide people. He should be prostrating himself, or at the very least conducting himself with a bit of humility — sartorially and in general.

But he’s not. On Monday, Zuckerberg met with civil servants, including Governor John Carney, in Delaware. He looked like an asshole:

The T-shirt, we’d argue, communicates a lack of respect for the officials in the room. And of course, Zuck doesn’t respect them. His position is invariably that Facebook is a solution to any of the world’s greatest problems despite so much evidence otherwise.

SEE ALSO: Facebook wants to own the world, not save it

Obvious example: The “Safety Check” feature he touts in this post as a way “to help keep our community safe” is perhaps more immediately recognizable as a malfunctioning panic-stoker. Another: The News Feed he champions for its “free flow of information” was harnessed by bad actors to influence the American election, which he refused to acknowledge until far too late.

Zuckerberg’s T-shirt and jeans are meant to say, “I have no one to impress.” A critical thinker knows they mean otherwise: This is a kid from Silicon Valley’s Neverland who doesn’t understand the grown people in collared shirts, or their constituents.

And his wardrobe is, as others have pointed out, worse than just immature or stupid: It’s emblematic of a system that lets men get away with whatever while women are held to a different standard. Consider this 2016 piece in which HuffPost‘s Emily Peck explains how Zuck’s awful clothes contrast with Facebook COO Sheryl Sandberg’s high-end wardrobe and styling:

Perhaps no two people better exemplify the double standard than the most well-known executives working at Facebook: cofounder and Chief Executive Mark Zuckerberg, known for wearing the same grey T-shirt and jeans every day, and Chief Operating Officer Sheryl Sandberg, who is typically seen perched atop towering high heels.

… their case highlights the fact that even in the tech world, where the concept of dressing down was invented, and even at Facebook, a progressive company run by a guy in jeans, women and men don’t quite play by the same rules.

So, we won’t belabor the point, but we will remind you that women continue to be dreadfully underrepresented in tech and underpaid overall.

SEE ALSO: Why Silicon Valley Is Failing at Diversity—And How to Fix It

Meanwhile, the ideals of a T-shirt clad bro, who doesn’t even seem to understand what his product is doing to the world, are given disproportionate weight. If he should ever run for office — a possibility, though we doubt it — remember, at least, all the times he was the arrogant kid in the room getting things wrong during this weird tour of the United States.

Not a good look.