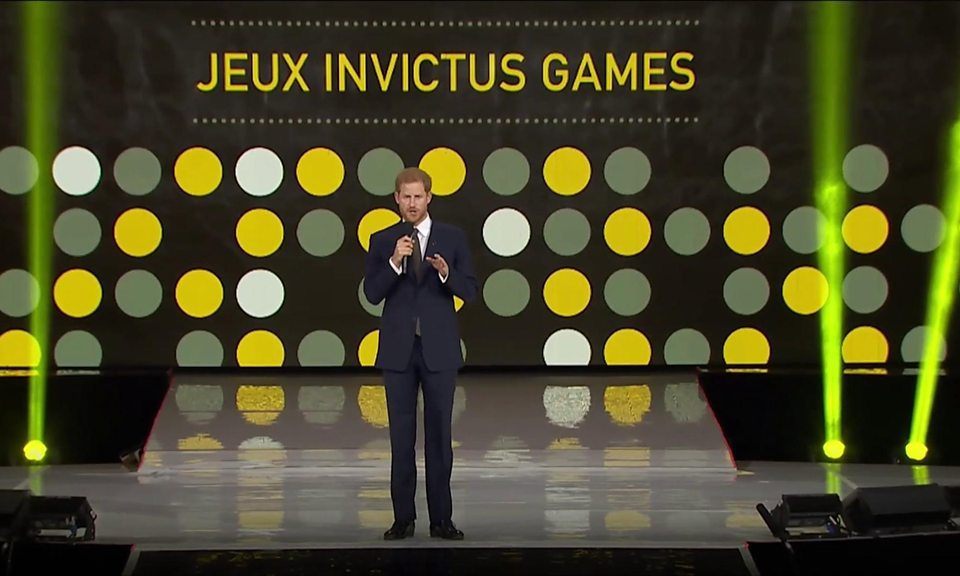 The prince’s girlfriend was in the stands at the Air Canada Centre in Toronto, but she was not sitting next to Harry.

Athletes from 17 countries will compete in 12 sports over eight days.

Launching the Games, the prince told the audience he wanted the world to be inspired “by the spirit of those who wear the uniform”.

There had been speculation that the event would be the first time Prince Harry, 33, and Ms Markle would be seen in public together.

The actress, who lives in the city, clapped and smiled as the competitors arrived in the stadium.

Ms Markle recently spoke about her relationship with the prince to Vanity Fair magazine.

“We’re two people who are really happy and in love,” the 36-year-old said.

The prince was sitting in a separate VIP area, next to US First Lady Melania Trump and near Canadian PM Justin Trudeau.

Taking the platform for his speech, Harry, who served as a helicopter pilot in Afghanistan, told how he felt compelled to raise awareness of the sacrifices made by servicemen and women after a harrowing flight back in 2008.

“As I was waiting on board the plane, the coffin of a Danish soldier was loaded on by his friends.

“Once on the flight, I was confronted with three British soldiers, all in induced comas with missing limbs and wrapped in plastic.

“The way I viewed service and sacrifice changed forever and the direction of my life changed with it.

“I knew it was my responsibility to use the great platform that I have to help the world understand, and be inspired by, the spirit of those who wear the uniform.”

The UK team trained at the University of Bath sports training village after selection trials there in April.

Some of the competitors have lost limbs or suffered long-term injuries.

Others are struggling with the mental scars of the conflicts they have experienced.

Retired Captain Trevor Greene of the Canadian Armed Forces was attacked by a Taliban insurgent in Afghanistan in March 2006 and as a result, suffered an axe wound to the head.

He has spent years in hospital and rehab recovering.

“When I got home the docs took one look at me and said if I lived – which they doubted – I’d be a vegetable the rest of my life,” Captain Greene told the crowds.

“They told my wife Debbie to stick me in a home somewhere and get on with her life.

“My army brothers fought for me against all the odds. They believed in me in the fight and they still do. I had a choice: to accept the prognosis and give up, or to fight like a soldier.

“I chose to be captain of my destiny, master of my fate.”

The inaugural Invictus Games took place in London in September 2014.

The first lady is in Canada to support the large American contingent taking part in the Games.

She praised the “wonderful spirit and determination” and said she was “honoured to lead the US delegation”.