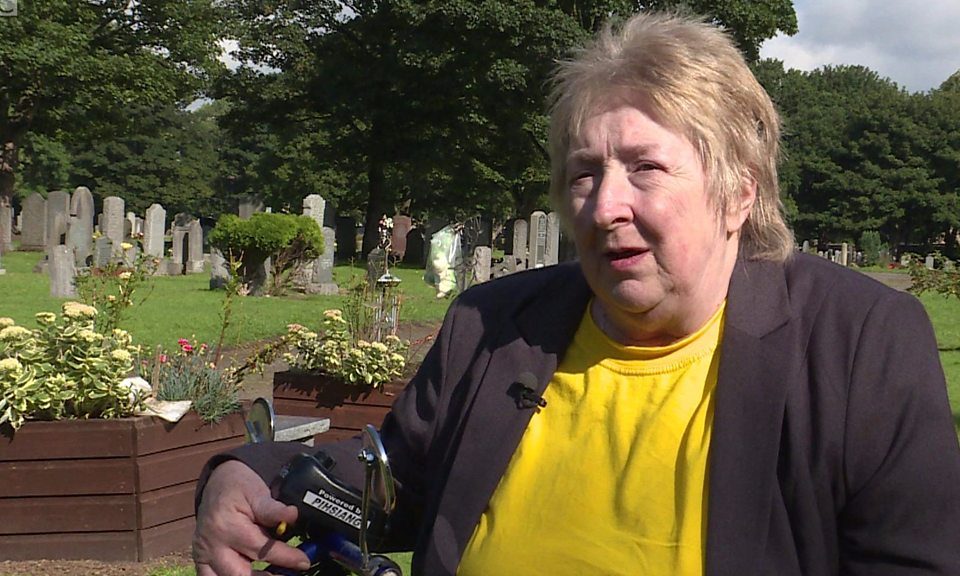 Mother finds no body in her baby’s coffin – BBC News

A mother who has been fighting for 42 years to find out what happened to her dead baby’s remains has discovered his coffin was buried with no body in it.

Lydia Reid was granted a court order for an exhumation to be carried out at the burial plot in Edinburgh last week but no human remains were found.

Her report concluded that the coffin was buried without human remains.

During the exhumation, Prof Black found a shawl, a hat, a cross and a name tag in the burial plot at Saughton Cemetery in Edinburgh, as well as the disintegrated coffin.

The internationally-renowned forensic scientist said there were no skeletal remains and no sign of decomposition.

She told BBC Scotland: “Ultimately there is only one possible logical explanation and that is that the body was not put in that coffin.”

Ms Reid, now 68, said that when she asked to see her son she was shown a child that was not hers.

“I objected but they said I was suffering from post-natal depression,” she said.

“This baby was blonde and big, my baby was tiny and dark-haired. This was not my son.”

Ms Reid has campaigned for years to find out what happened to her son.

She was a leading figure in the Scottish push to expose how hospitals had unlawfully retained dead children’s body parts for research.

The NHS in Scotland was forced to admit the widespread practice after an investigation into organ retention at Alder Hey hospital in Liverpool.

About 6,000 organs and tissues were retained by Scottish hospitals between 1970 and 2000, many from children.

Ms Reid continued to suspect her son’s organs had been taken without permission but she has never found proof.

She said a post-mortem examination was carried out after his death against her wishes.

After getting Prof Black to agree to carry out DNA testing on the remains, Ms Reid was granted a court order for an exhumation to confirm the contents of the coffin.

Prof Black, the director of the Centre for Anatomy and Human Identification at the University of Dundee, said: “Lydia believed the baby in the grave may not be hers. The aim was to find bone for DNA analysis.”

She said they found the coffin about 6ft down and the nameplate allowed them to identify that they were in the right place, even if Gary’s name was spelt wrongly.

“When we first went down into the grave site there was a lot of funeral clothing so our expectation was that we had found what we were looking for,” she said.

However, when they took the contents back to the lab to examine them there was no trace of human remains.

There was a woollen shawl, a hat and a cotton shroud as well as fragments of the coffin.

“So we had wool, cotton and even a little cross, all preserved incredibly well – but there were no human remains,” Prof Black said.

“There was no baby in the coffin.”

“There is no other answer because you never get that level of preservation of coffin and not have a body be preserved.

“There is no hair inside the hat, there is no bone inside the coffin shroud. It was not there and I have never seen that before.”

“I wanted to be wrong. I wanted to be called a stupid old woman but the minute Sue lifted the shawl out of the ground I knew there was nothing in it.

“My heart hit my feet and I did not know what to say.

“It is devastating to know that all years I have been coming here to honour my son and he’s not been here.

“He is my son and he deserves the respect of a proper burial.”

She said someone must know what happened to him.

“Even if he has been incinerated I want to know,” she said.

“Even if he is lying in a jar in a hospital somewhere I want to know. If it is possible to get my son back, I want my son back.

“If it is not possible then at least tell me and let me have peace.”

Ms Reid said she knew for her time in the organ scandal campaign that there would be other cases like hers.

Prof Black said: “If I was a betting woman I would say this is not an isolated incident and the reason is that it seems to incredibly well executed.”

She said: “There will have to be an investigation of some sort.”

Funeral directors Scotmid Co-operative Funerals said as soon as they heard of the allegations they informed Police Scotland.

A statement said: “We also recently met with Mrs Reid and close members of her family to offer our full support in what has been an extremely distressing situation for them.

“We hope that our actions in contacting the police will help give Mrs Reid the answers to the questions she has raised about her son’s funeral.”

NHS Lothian deputy chief executive Jim Crombie said: “Our condolences are with the family of Gary Paton. This matter is now being looked into by the police and we are unable to comment further.”