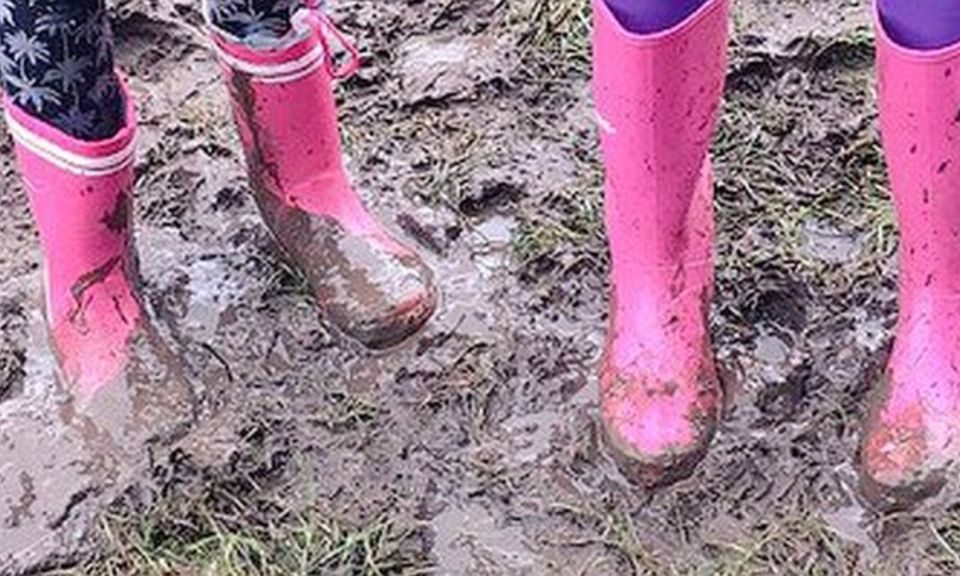 The Belladrum Tartan Heart Festival has been taking place near Beauly in the Highlands.

It was opened with performances by veteran US group Sister Sledge and Swedish folk act First Aid Kit.

The entertainment continued on Friday, when it rained for most of the day and conditions underfoot became decidedly squelchy.

Bella is due to close late on Saturday night with a main stage performance by Franz Ferdinand.

“It is going great, other than an occasional shower which we are currently in now,” said Bella’s boss Joe Gibbs, standing in the pouring rain with a grin on his face early on Friday morning.

“It has been a wonderful festival so far, with a fantastic set by Sister Sledge on Thursday night.”

The band were performing without member Joni Sledge, who died earlier this year at the age of 60.

Gibbs said: “Their performance was one of the most moving moments for me ever at Belladrum.

“To see so many people down in front of the main stage singing We Are Family.”

Joni’s son came on stage to sing her part in the group’s disco anthem.

Gibbs said: “That was a wonderful unscripted moment.

“Also on Thursday night we had First Aid Kit, a Swedish duo that many people were excited about and who drew a large crowd for their performance.”

Two of the band’s members, frontman Grant Nicholas and bass player Taka Hirose, took a few minutes to relax backstage before for their performance.

Nicholas had come to Bella prepared. He was wearing a woolly hat and wellies. Hirose was wearing cool shoes without any socks. No socks. In Scotland. In summer. Crazy man.

Nicholas and Hirose were also sitting on a bale of straw, a wink towards Bella’s rural setting.

“We are Feeder, backstage, sat on a straw bale,” said Nicholas as a way of introduction.

“It’s really comfortable,” he added. “We will have this as part of our rider from now on – two bales of straw.”

Feeder have been in the music game since the 1990s, but Nicholas said he still has pre-gig nerves.

“I think that is something that never goes away,” he said.

Hirose said playing festivals gave him and the band a chance to catch up on what newcomers are doing.

“It is good to see new bands, and hang around the festival. It brings me back to when we first started. You feel nostalgic.”

Shortly after Feeder left backstage, and the comfortable bale of straw, a new figure loomed large.

It was Scottish wrestler Jack Jester.

He picked up a chair and for a moment there was an air of tension. But, happily, instead of smashing someone over the head with it he casually sat down.

Jester is part of a wrestling group that has put on shows at Belladrum for the past four years.

“I won today,” he grinned on being asked how his day had been.

“I am not a big festival fan, but it is always good to come to Belladrum. It’s always good fun,” said Jester.

He added: “The audience is not like an audience of adult wrestling fans, it is more like doing a holiday park show.

“If it was a magic show in our tent people would come to it, so my job is to show the crowd what wrestling is all about.

“Before the show we do agree to leave certain things out – our usual show have adult content – and then you get out there and it is the kids shouting ‘break his arm’.”

Doing what seemed to be their best to break every single bone in their bodies were the Drop and Roll street trials rider crew.

Pulling off dangerous tricks on bikes were Inverness’ Duncan Shaw, Skye’s Danny MacAskill and from the north of England, Ali Clarkson.

Inside their trailer on a quick break between performances, Shaw and MacAskill shared some of their thoughts on Bella. This weekend marks their fourth appearance at the festival.

Shaw said: “The first year we did we had just got the team together and it was our second ever show and first festival.

“Thankfully, they’ve asked us back every year since.

“There is a good vibe and such a good family atmosphere.”

MacAskill added: “For us it is our local show. We really feel at home.

“The weather has not been the best, but the crowds are still standing there bigger than ever.”