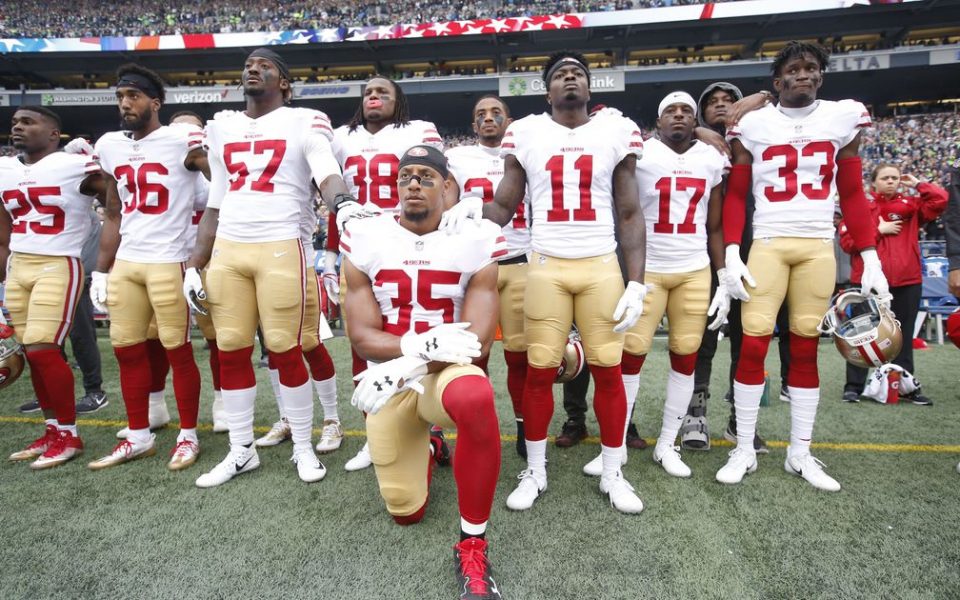 NFL players lash out after Trump rants about athlete protests

Football players are lashing out at Donald Trump after the president went on an extended rant about athlete activism at a rally Friday night.

Trump called on NFL owners to fire players who kneel or otherwise protest during the national anthem and encouraged fans to boycott the league.

“Wouldn’t you love to see one of these NFL owners, when somebody disrespects our flag, to say, ‘Get that son of a bitch off the field right now. Out. He’s fired! He’s fired!” Trump said.

Read the transcript from Trump’s racist rant on Black players in the NFL.

I just spoke to the @NFLPA.

They are going to respond to this foolishness from Trump.

A growing number of NFL players and other athletes have made symbolic gestures during the anthem to call attention to incidents of police brutality as part of a movement former 49ers quarterback Colin Kaepernick started last fall.

Trump has previously attacked Kaepernick on multiple occasions and took credit for his current unemployment at a rally earlier this year.

The president also seemed to criticize the NFL for taking safety measures meant to reduce the number of head injuries that have caused players lasting brain damage.

“They want to hit! It’s ruining the game,” he said.

I can’t take anything our Celebrity in Chief says seriously. He’s a real life clown/troll 🤡

The @NFLPA @NFL better set the tone with this response!

It must embody the sentiment of what’s been bottled up for years! https://t.co/0HjExuYgSQ

They really let Trump do and say whatever TF he wants. Shit is crazy.

You want to send a message to NFL owners for the next CBA? Stage a sit-in against the president of the US. I guarantee they’ll pay attention

WATCH: The disturbing truth about vitamins