Previous postKing Arthur: Welsh, English, Brythonic or made up? - BBC News
Passchendaele: The village that gave its men to war - BBC NewsNext post 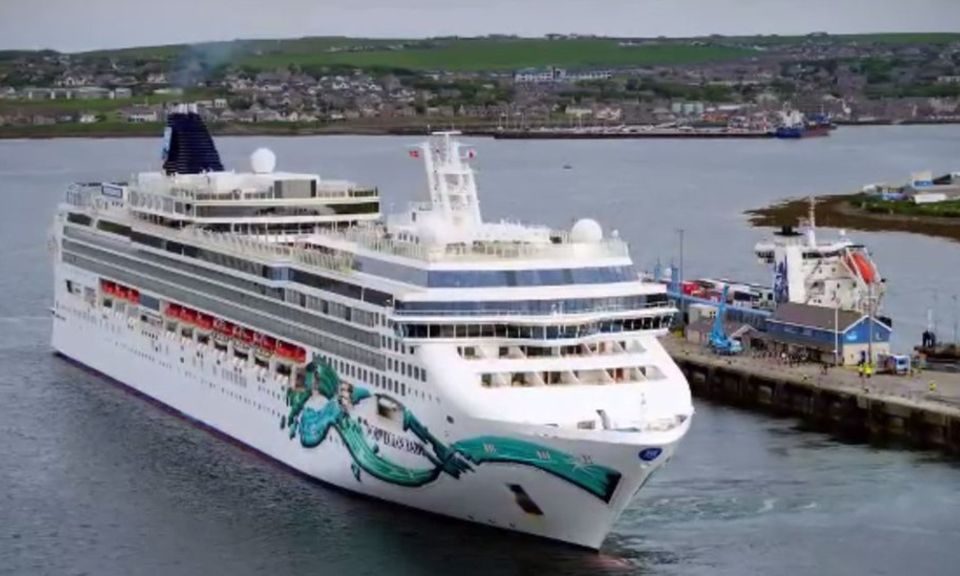 The number of cruise ship passengers stopping off in Orkney has increased massively in recent years but the tourist invasion has not all been plain sailing.

This year, 140 cruise liners will berth at Hatston pier, on the outskirts of Kirkwall, the biggest town on Orkney’s mainland.

More than 130,000 tourists are expected during the season – between the start of April and the end of September – six times the population of the entire Orkney archipelago, which lies about 10 miles off Scotland’s northern tip.

The ships bringing tourists to Orkney range in size from a couple of hundred passengers to the huge MSC Preziosa, the biggest ship to have ever berthed there.

It arrived on 10 May with a capacity of 4,345 passengers and 1,400 crew, more than half the size of Kirkwall’s population.

Jimmy Poke, who operates the shuttle bus service that takes passengers into the town, tells the BBC Scotland documentary Orkney: When The Boat Comes In that the increase in cruise ships has been a “very positive thing” for his business.

He says: “When we started we had one bus and now we have 23. It is not the only thing that keeps us in business but it’s a huge factor in the summer time.”

However, Jimmy admits that there is some “negativity” on the island, with shopkeepers saying they sometimes struggle to cope with the large influxes of people and complaining that many of the tourists are not big spenders.

Jimmy says: “I still think that if I wasn’t involved in the industry I would be happy to see people here because I like the hustle and bustle of it all.”

By 10:00 on the morning of the MSC Preziosa’s arrival, 460 passengers have already been shuttled into town.

She says: “I opened the shop when I was very young and I’ve seen lots of changes throughout the years particularly with the increase in the liner traffic.

“I think it has given us such a boost in the summer time to have all these people coming here.

“There is no way our town centre would look as good as it does if we did not have those cruise ships.”

She says that the town is “absolutely dead” in January, February and March.

“There are no tourists here, it is as quiet as anything,” Judith says.

“In order to survive the winter we do need these cruise ships.”

By lunchtime, Jimmy is already shuttling passengers from the town to get back onboard the ship.

He says: “Sometimes people get annoyed because the food is all-inclusive on the ship so people go back at lunchtime and the cafes and restaurants in the town say they don’t make a lot.”

At Lolz, owner Lorraine Pilkington-Tait says she feels that the food industry does not do very well out of the liner passengers.

She surveys her crowded cafe and says: “Everybody is having teas and coffees. Nobody is eating any food.

“We get people coming in and having a cup of coffee, sitting on the wifi, they can stay hours.

“You can’t exactly ask them to move on.”

Lorraine also voices the opinion that the number of people visiting the island has spoiled some of its undiscovered magic.

She says: “Some friends of mine who used to come to Orkney feel these cruise liners are changing everything, it’s spoiling it.”

Recent research suggested that local business-owners were fairly positive about the impact of the liners and their passengers but much depended on which cruise ship was visiting.

High-spending passengers such as those who arrived on the recent Disney Magic cruise were seen to have the most positive benefit.

Jeweller Steven Cooper, owner of Aurora, says: “The jewellery side can be really good if you get people coming in and they want to buy a gold ring.

“I’ve had people buying a gold ring or a diamond for 1,000 but it tends to be more silver because they are generally buying it as gifts.

“Actually last year I had a passenger off a cruise ship who bought a gold bangle for 2,500. It’s great when they do.”

Steven adds: “Jewellery is ideally suited for cruise ship passengers because it is a small item which is not taking space up in their luggage.

“Over and above that they really like textiles, tartan products etc. That’s quite a big part of the business.”

One shop that does good business from the cruise liners but does not attract big spenders is the Clan Cancer Support charity shop.

Kayleigh Archibald says the crew from the liners seem to buy a lot of bedding and handbags.

She says most of the crew are from South Asia.

“They do a lot of shopping to take back to their families,” Kayleigh says.

“The reason they come into charity shops is because it is a bit cheaper. Today they were buying bodywarmers because they were finding it a bit cold.”