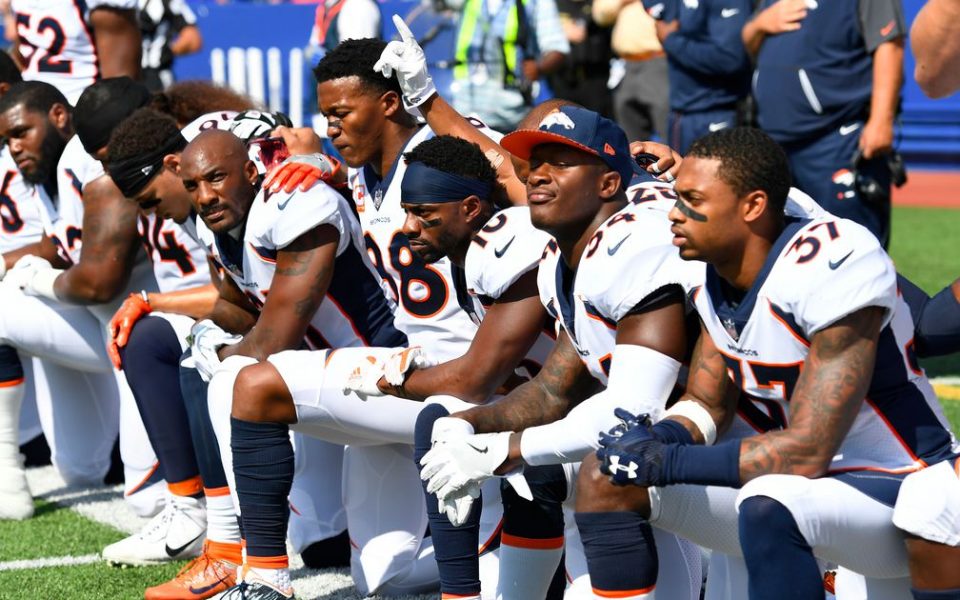 People are still missing the point of #TakeAKnee protests

An unprecedented number of NFL players kneeled or otherwise protested during pre-game national anthems this Sunday after Donald Trump spent his weekend feuding with the league over the peaceful act.

The hashtag #TakeAKnee (and a variant, #TakeTheKnee) trended on Twitter all day Saturday and Sunday as players and some team owners and front offices defied the president’s repeated attacks with public statements and on-field shows of solidarity.

And despite players’ repeated explanations of the intention behind their decision to kneel or raise a fist, it seems there’s still a lot of (sometimes willful) misunderstanding about why they’re doing so.

Ever since former 49ers quarterback Colin Kapernick started his protest last September, he’s been clear about the fact that there’s no intent to disrespect the military, the country’s bedrock values, or any of the other patriotic ideals commonly raised by his critics.

I can’t think of a more respectful form of protest than #TakeTheKnee. It’s not at all disrespectful to the anthem; on the contrary 1/

Rather, the protest is simply to call attention to the ongoing problem of disproportionate police violence against non-white people in America and the lack of consequences for its perpetrators, Kaepernick has said.

In fact, he actually opted to kneel rather than sit last year after former NFL player and Army Green Beret Nate Boyer suggested it might show more reverence to soldiers and veterans.

“Once again, I’m not anti-American,” Kaepernick said at the time. “I love America. I love people. That’s why I’m doing this. I want to help make America better. I think having these conversations helps everybody have a better understanding of where everybody is coming from.”

Kaepernick is now a free agent, but the movement he started as a 49ers is now stronger than ever. The dozens of players who’ve joined have been similarly explicit about their reasoning.

For instance, Oakland Athletics catcher Bruce Maxwell, who became the first MLB player to take a knee during the anthem on Saturday, said his gesture was not meant to detract from the significance of his own father’s army service.

“I know I was on the fence for a long time because I know no one in baseball has ever done it,” Maxwell said in a post-game press conference. “I finally got to the point where I thought the inequality of man is being discussed, and it’s being practiced from our president.”

The severity of the real problem driving the protests was underscored earlier this season when Seattle Seahawks defensive lineman Michael Bennett was seemingly arbitrarily arrested in what he claimed was an instance of racial profiling and excessive use of force.

“The system failed me. I can only imagine what Eric Garner, Michael Brown, Trayvon Martin, Tamir Rice and Charleena Lyles felt,” he wrote in a statement on the incident.

Despite appeals like that, Trump has never mentioned the issue at the center of the movement, and he continues to openly call it a protest against America itself.

If NFL fans refuse to go to games until players stop disrespecting our Flag & Country, you will see change take place fast. Fire or suspend!

Yet the newfound willingness of NFL owners to make at least conciliatory statements in defense of their players’ right to free expression signals there may finally be more acknowledgment of the substance of the protests rather than the method.