Previous post'South Park' is trolling America by messing with their home assistants IRL
Levi's asks on 'SNL': If you're woke, why aren't your jeans?Next post 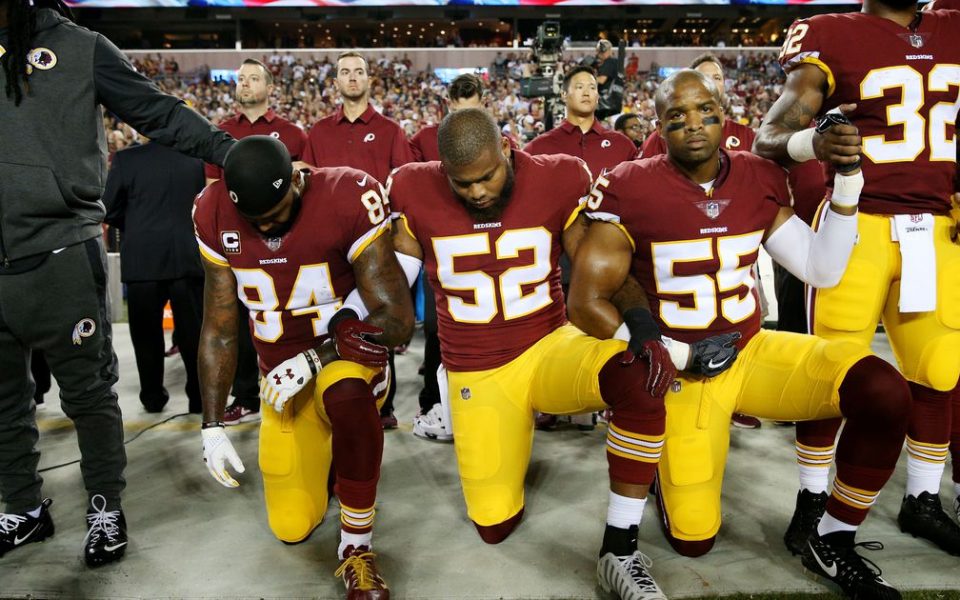 Taking a knee during the national anthem is upsetting some DirecTV customers.
Image: Patrick Smith/Getty Images)

Ignorance is bliss, especially when it comes to free speech at football games.

That’s what Trump supporters and other football fans who can’t handle sports activism seem to think.

For the football fans who claim they are bothered seeing athletes standing up (or rather, kneeling) for the right to protest, DirecTV is caving with refunds to their sports package, the Wall Street Journal reported.

The cancellations stem from 49ers Colin Kaepernick kneeling in protest last season during the national anthem in response to police brutality disproportionately affecting the black community. The protest has since spread through the league and president Donald Trump used strong words for anyone taking a knee at a rally last week.

“Wouldn’t you love to see one of these NFL owners, when somebody disrespects our flag, to say, ‘Get that son of a bitch off the field right now. Out. He’s fired! He’s fired!'” the president said at the Alabama rally.

That stirred up an even bigger response over the weekend — when many football games were scheduled, including those on the NFL Sunday Ticket streaming package from DirecTV.

Protests continued during Monday Night Football with the entire Dallas Cowboys organization taking a knee before the anthem. Other teams are linking arms or skipping out on the anthem altogether.

Trump has only doubled down on his views about kneeling during the anthem. He was still tweeting about the issue Tuesday.

The NFL has all sorts of rules and regulations. The only way out for them is to set a rule that you can’t kneel during our National Anthem!

So fans who feel similarly to the president are getting a refund for the $70 per month football package. This is not something you can usually return after purchasing.

But the WSJ found if customers cite the national anthem protests and politicization of the games, the company is letting customers get their money back either wholly or partially — it was still unclear if packages were pro-rated since the season is already underway.

No matter the refund policy, it’s no more football streaming for those who complain about the kneeling.

Those who don’t support the protests sounded pleased with DirecTV’s decision, and were urging likeminded individuals to cancel the service as something of a statement.

Was able to get a FULL REFUND from @DIRECTV on my #NFLSundayTicket (which auto-renewed).

Nice guy, “Joe”, said they have canceled MANY.

Dear Patriots!
You can get a REFUND from @DIRECTV for your @NFL package, if you cite the National Anthem protests!pic.twitter.com/2CxiUMhtsV

Want to send a REAL message to the “Eff America NFL?”
Ask for a refund from DirecTV for your NFL Sunday Ticket…. https://t.co/BOdbeYJySU

Awesome news I paid around $350 for @NFL package; not good news for $T shareholders of which I’m one but #Directv is doing the right thing https://t.co/47DvG3vquf

We reached out to DirecTV for confirmation and comment about the refunds.

The WSJ found that another sports package, NFL’s RedZone, is also allowing cancellations for similar reasons.

For all those sports fans who can’t take a little symbolic protesting, relief is here. But basketball season doesn’t look like it’ll be much different.