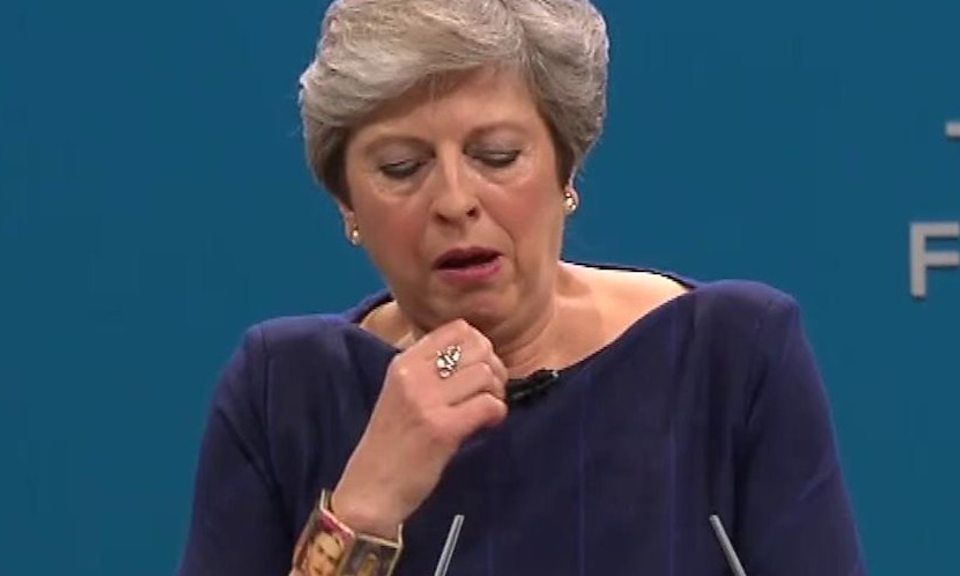 Theresa May had to battle losing her voice and being interrupted on stage by a comedian as she sought to reassert her Conservative leadership.

Mrs May, who at one point was handed a throat sweet by the chancellor, did make it to the end of a speech in which she vowed to “renew the British dream”.

She announced plans for more council houses and a cap on energy prices.

But they were overshadowed by the problems she had delivering the set-piece speech in Manchester.

BBC political editor Laura Kuenssberg said the annual conference “was meant to be about restoring Theresa May’s authority – it may prove instead to have been further undermined”.

Mrs May was interrupted early on in her speech by comedian Simon Brodkin – also known as Lee Nelson – who managed to make it to the podium to hand her a P45, a redundancy notice, saying to her that “Boris asked me to give you this”.

After he was removed and she got encouraging cheers from the audience she joked that the only P45 she wanted to give out was to Jeremy Corbyn.

But she struggled to finish the speech because of a croaky voice, having to stop several times to drink water.

Sources close to the prime minister have said that the PM had caught the “conference cold”, and that her many interviews and meetings this week have taken their toll on her voice.

They say the prankster who interrupted her speech has been arrested for a breach of the peace and there will be a thorough investigation of security.

To add to her woes, some of the letters fell off the conference stage backdrop. By the end it read: “Building a country that works or everyon.”

What now for May – Laura Kuenssberg’s view

In normal political times, it is probably the case that what one minister described as a “tragedy” today would have led to a prime minister being forced out or quitting.

But these aren’t normal times. Allies of Theresa May say today she has shown her resilience and determination in spades, demonstrating exactly why she deserves to stay in the job.

A senior colleague of hers told me she importantly did manage to put forward a coherent vision and talked about her personal beliefs. More than that, for those who want her gone there are three obstacles.

Scottish Conservative leader Ruth Davidson said of the prime minister’s performance: “If ever there was a metaphor for battling through adversity, that was it.”

In the speech itself, Mrs May delivered a call for a “modern, compassionate Britain” and focused on her personal commitment to social justice and fairness.

She also apologised to activists in Manchester for an election campaign that had been “too scripted, too presidential”.

And she said the “British dream” that “life should be better for the next generation” was out of reach for too many people, something she vowed to dedicate her premiership to fixing.

Mrs May began her speech by outlining the reasons why she joined the Conservative Party more than 40 years ago, stressing that the things that have made her most proud in politics have not been the positions she has held, but “knowing that I made a difference – helped those who cannot be heard”.

She announced that there would be an independent review of the Mental Health Act, to tackle injustice, and would press for justice to be done for the families of those killed and injured in the Grenfell Tower tragedy.

Turning to Brexit, Mrs May said she was “confident that we will find a deal that works for Britain and Europe”. She also reassured European citizens living in the UK that “you are welcome here” and urged negotiators to reach agreement on this policy “because we want you to stay”.

Mrs May said it had “always been a great sadness for Philip and me that we were never blessed with children”, but she said this did not stop her wanting to help young people on to the housing ladder.

Hailing plans to “reignite home ownership” in Britain, she said the government plans to invest an additional £2bn in affordable housing, taking the total budget up to almost £9bn.

If ministers made the land available and gave young people the skills to build the houses, she challenged house builders to ensure they “build the homes our country needs”.

Who is Simon Brodkin aka Lee Nelson?

Simon Brodkin is an English comedian more commonly known by his TV character name Lee Nelson. Handing the prime minister a P45 was far from his first.

His most famous interruption came at Glastonbury in 2015 when he ran onstage as Kanye West was performing. He pulled a similar stunt on The X Factor in 2014, running onstage as the Stereo Kicks were playing.

The BBC’s assistant political editor Norman Smith said the focus on council housing underlines Mrs May’s readiness to intervene and use the public sector to build houses in a way not seen since the 1950s.

Mrs May announced that the government will next week publish draft legislation to impose a cap on energy prices. Downing Street says it will apply to all standard variable rates.

Having seen her Commons majority vanish after June’s general election and facing calls to sack Foreign Secretary Boris Johnson over his interventions on Brexit, Mrs May attempted to use the conference to unite the party behind her “mission” to transform Britain.

She said it would not be easy, but “it has never been my style to hide from a challenge, to shrink from a task, to retreat in the face of difficulty, to give up and turn away.”

“And it is when tested the most that we reach deep within ourselves and find that our capacity to rise to the challenge before us may well be limitless.”

The disruptions to the speech dominated discussion afterwards, but for Labour, shadow chancellor John McDonnell saying that there had been £15bn of pledges made by the end of the speech showing “the Tory magical money tree returns”.

Lib Dem leader Sir Vince Cable called it “the speech of a brave prime minister struggling on, while her disloyal Cabinet colleagues openly plot against her”.