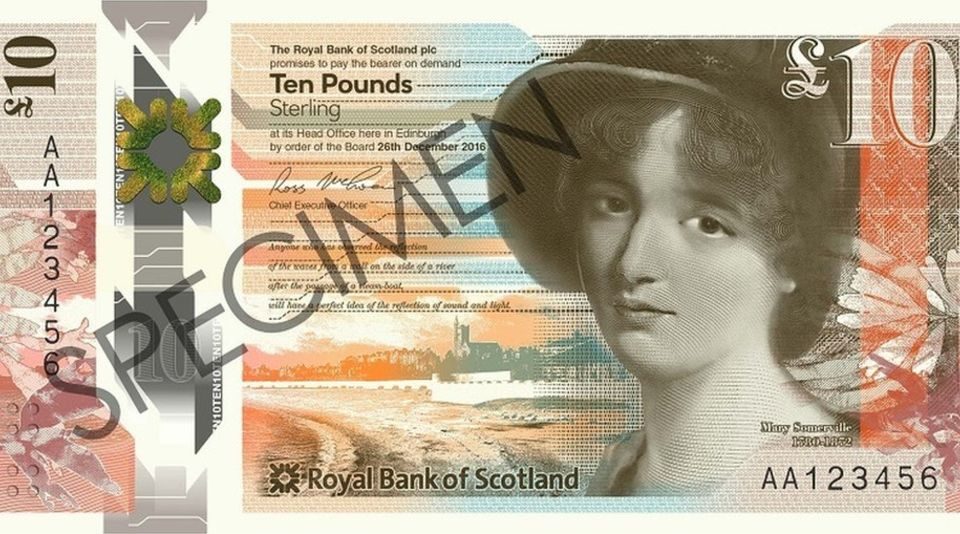 The Royal Bank of Scotland is to issue its first polymer 10 note to the public on 4 October.

The new note features images of Scottish mathematician and astronomer Mary Somerville, her hometown of Burntisland in Fife, and two otters.

The material includes a variety of new security features which the bank said makes them “difficult to counterfeit but easy to authenticate”.

For the first time, the note includes braille to help the visually impaired.

The bank also announced that the face of its polymer 20 note, which is not expected to enter circulation until 2020, will feature Glasgow philanthropist and entrepreneur Catherine Cranston.

The new 10 note is 15% smaller than the paper ones currently in circulation. It follows the bank’s polymer 5 note, which features Scottish novelist and poet Nan Shepherd, and came into circulation in 2016.

RBS chief executive Ross McEwan said the bank felt that their notes had value beyond the figure printed on them, and were a “symbol which lives in people’s pockets and touches everyday lives”.

He said: “It has been 30 years since we produced a new 10 note, and we wanted the public to help influence the design. They helped influence our theme of ‘fabric of nature’ and helped us consider the impact Mary Somerville has had on our understanding of the world in which we live.

“It is fitting that our most advanced note yet will carry her portrait.”

A moon diagram taken from Somerville’s book Mechanism of the Heavens appears when the note is viewed under UV light.