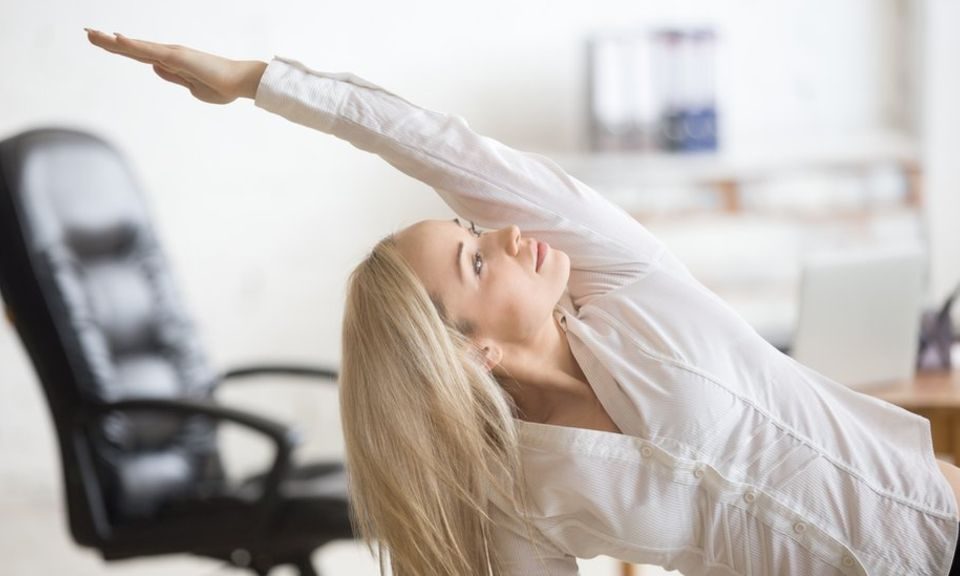 Should exercise be compulsory at work? – BBC News

The news this week that more than 20 million people in the UK are physically inactive has led to a lot of discussion over how to tackle the problem. But with no easy solution and rates of obesity rising fast has it come to the point that exercise should become part of our working day?

“Exercise in the office isn’t a new idea. But it’s such a clear win-win – in terms of health, morale and productivity,” says Ryan Holmes, the CEO of HootSuite, a social media platform.

In a first-person article on Medium entitled, Why It’s Time We Paid Employees to Exercise at Work, Holmes makes a passionate case for exercise becoming part of the working day and bosses paying for it.

His social media tech company has about 700 employees, and exercise before, during and after working hours is encouraged, in the small on-site gym.

“Yoga classes are packed before work, at lunch and after work. In the gym, volunteers from our company lead sweaty bootcamps and cross-training classes. Groups set out from our office for lunchtime runs and evening hikes. We have a hockey team and a road biking team and even a Quidditch team that does battle on broomsticks in the park.”

Tech giant Google led the way in office gyms but Homes doesn’t believe a company has to have a gym on site, and says he encouraged staff to exercise even when they were a small start-up.

“We made it clear that anyone could block off an hour for exercise during the day, provided it didn’t conflict with meetings and they made up the time (by having lunch at their desks, for instance).”

And he believes it’s more than worth it.

“I see employees return from workouts refreshed and better focused on their jobs. Time lost on exercise is made back and more in terms of improved productivity.”

And he believes he’d never have built up his company without taking exercise himself during the day that enabled him to “maintain composure and focus in the midst of chaos”.

The main barrier raised by many against taking regular exercise is work-life commitments so finding more time in the day for exercise does lead us to the workplace.

The government issued guidelines via NICE in 2015 on how promoting a culture that improves the health and wellbeing of employees is “good management and leads to healthy and productive workplaces”.

And there is an economic case for promoting exercise at work – healthy staff mean fewer absences due to illness.

Each year, more than a million working people in the UK experience a work-related illness. This leads to around 27 million lost working days costing the economy an estimated 13.4bn.

A study at Bristol University showed that employees who can exercise at work “are more productive, happy, efficient and calm”.

Exercise re-energised staff, improved their concentration and problem-solving and made them feel calmer.

With 60% of our day often spent at work, the British Heart Foundation wants employers to make workplaces healthier places.

They have lots of tips for employers on how to make businesses more healthy and point out that classes like pilates and boxercise can be popular in the workplace if organised to fit around the working day, and delivered on-site or in a facility nearby.

But if employers can’t go that far, the foundation says bosses should encourage staff to take a short active break during the day as shown in their 10 minute workout video.

Exercise breaks are a feature of a number of large Japanese companies. In 2010, China reintroduced mandatory exercises twice a day at state-owned companies after a three-year gap.

Set up by the Communist Party, they had previously been running since the 1950s, with state radio broadcasting music at 10:00 and 15:00 for workers to do their set exercises.

Making exercise compulsory would be seen as a step too far for a country like the UK, but with more and more desk-bound jobs these days, do employers hold the key?

One place to start could be for employers to ban “cake culture” in the office.

Prof Nigel Hunt, from the Faculty of Dental Surgery at the Royal College of Surgeons, says the habit of bringing cakes into the office fuels obesity and dental problems.

“For many people, the workplace is now the primary site of their sugar intake,” he says, and suggests staff should be rewarded with fruit, nuts or cheese instead.

Another very simple step to help our health in the office is to stand up more.

The NHS offers advice on how to manage the government’s recommended 150 minutes of exercise a week, but they also have advice on how much just standing up can improve our health.

The link between illness and sitting first emerged in the 1950s, when researchers found London bus drivers were twice as likely to have heart attacks as their bus conductor colleagues.

Standing up three hours a day, five days a week for a year, would be the equivalent of “running 10 marathons”, according to experts.

NHS Choices recommends breaking up long periods of sitting time with “shorter bouts of activity for just one to two minutes”.

And some people now choose to work standing at higher desks.

One final option we could suggest is getting an office dog.

Nestle’s headquarters in London allows employees to bring their dogs to work because they say it promotes a less stressful office and encourages more exercise and a healthier work-life blend.