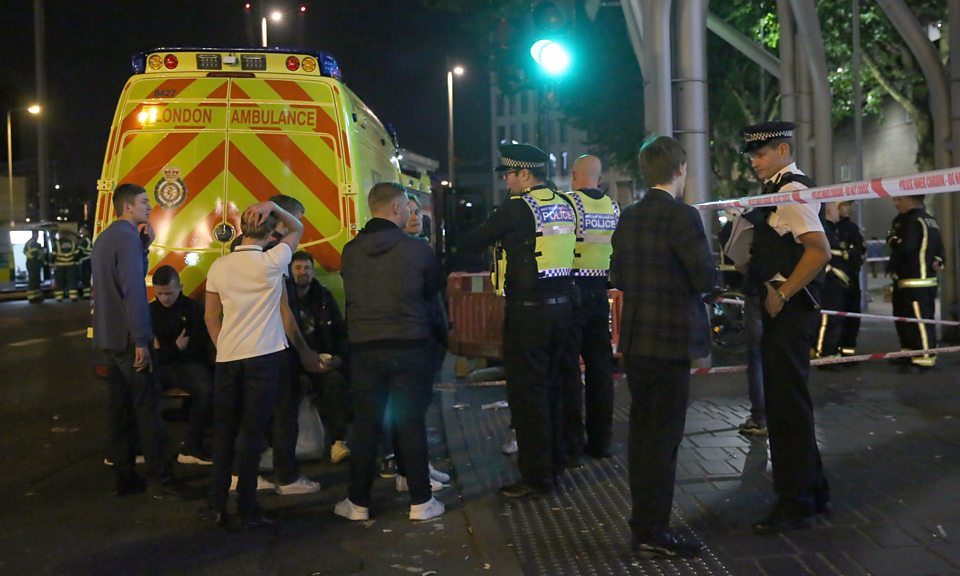 Six people have been injured in Stratford, east London, in a reported acid attack.

Police were called to Stratford Centre, opposite Westfield, just before 20:00 BST, following an “altercation” between two groups of males where a noxious substance was thrown.

Ambulance crews treated six males at the scene for their injuries, and three of them were taken to hospital.

A 15-year-old boy has been arrested on suspicion of grievous bodily harm.

Those reported injured were believed to be in a number of different locations, sparking initial fears that people had been sprayed at random.

However the Met Police said those injured were connected to the initial attack.

Ch Supt Ade Adelekan said: “I would like to be very clear concerning this incident.

“What initially may have been perceived as a number of random attacks has, on closer inspection, been found to be one incident involving two groups of males.”

Witnesses at the scene said an argument had broken out among a group of people.

A man who gave his name as Hossen, an assistant manager at Burger King, said a victim had run into the fast food chain to “wash acid off his face”.

The 28-year-old added: “There were cuts around his eyes and he was trying to chuck water into them.”

Tahseen Taj lives in one of the buildings just opposite the shopping centre and was disturbed by the noise.

“I could hear a lot of ambulances and police from around 20:45, but also there’s a West Ham match today; I thought it must be a football brawl,” she said.

“But after some time it just increased and increased, and there were a lot of fire brigades and ambulances and police, and it was quite chaotic to be honest.

“I was quite worried.”