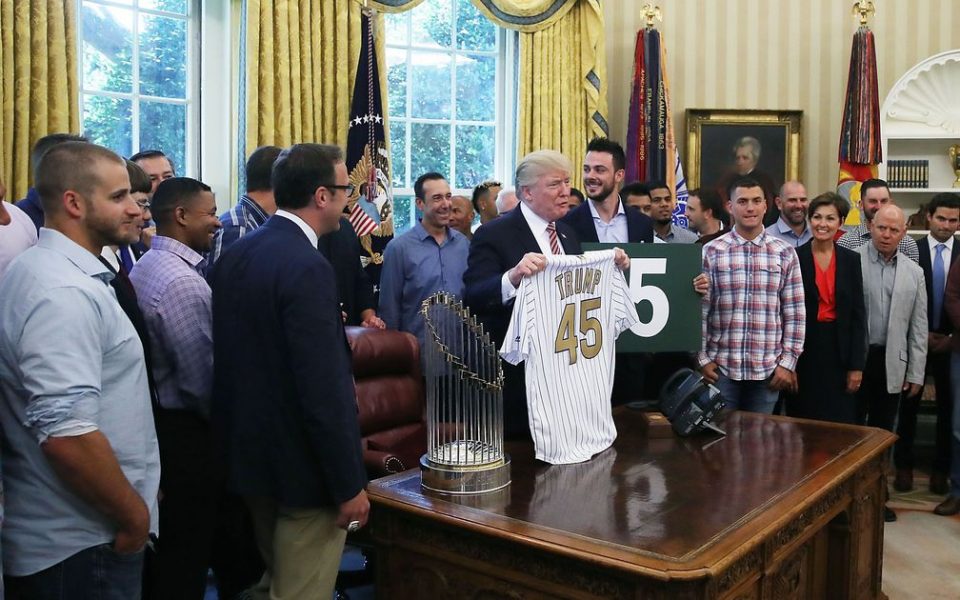 Sports teams won’t stay at Trump’s hotels, which is hitting his wallet hard

The Chicago Cubs visited Trump at the White House, but other teams refuse to stay at his hotels.
Image: Mark Wilson/Getty Images

President Trump has been riling up pro athletes with disinvitations to the White House and attacks on police brutality protests. Now some teams are hitting back where it hurts: his wallet.

Pro sports teams from the NBA, MLB, and NHL have stopped staying at Trump-owned hotels. The Washington Post reached out to all teams in those three leagues and the NFL (that’s 123 teams altogether) and found at least 16 no longer stay at Trump hotels while on the road.

While NFL teams typically don’t stay at luxury hotels like Trump’s because of their massive teams and support staff, other teams do. The Washington Post found that teams pay about $20,000 a night to stay at hotels like Trump SoHo in New York City.

That’s some real money, with 16 teams pulling their business across separate seasons.

NFL teams typically do not stay at luxury hotels. Some have stayed at Ritz hotels, but I do not believe that is a regular occurrence though.

When basketball teams stay on the road, they hit up nice spots. A league favorite had been the Trump SoHo in Manhattan, but the WaPo found that since Trump announced his candidacy in 2015, 11 teams have found accommodations elsewhere.

The Toronto Raptors, Phoenix Suns, Houston Rockets, Sacramento Kings, and Washington Wizards gave up their SoHo habit after Trump was elected, and have other plans for next season.

The Oklahoma City Thunder, Golden State Warriors, and Memphis Grizzlies stopped staying at Trump hotels after Trump started campaigning. After the Warriors won the championships, star player Steph Curry said he didn’t want to visit the president. Soon after that, Trump retracted his invitation to the team to visit the White House.

The Dallas Mavericks, Indiana Pacers, and Milwaukee Bucks each gave up on Trump stays before or during Trump’s presidential campaign.

Last year’s World Series winners, the Chicago Cubs, visited Trump at the Oval Office in June (even though they had already visited Obama while he was still in office back in January). That hasn’t stopped teams like the Los Angeles Dodgers from pulling out of Trump hotels while traveling.

Even if it appears football teams don’t stay at Trump hotels, politics has certainly seeped into the league during Trump’s presidency. New England Patriots players refused to visit the new president after their Super Bowl win. The recent national anthem protests have brought players, owners, and the White House into a controversy about respecting the flag, the right to protest, and racial issues (although not enough on that last point, which was the impetus for former 49ers quarterback Colin Kaepernick’s original kneeling protest).

Even with these latest findings about teams pulling away from Trump-owned businesses, Trump hotel boycotts aren’t new. Some athletes like NBA star LeBron James were highly vocal and critical of Trump during the campaign. Now entire teams are giving a subtle but cost-effective nudge to the president, his rhetoric, and his policies.