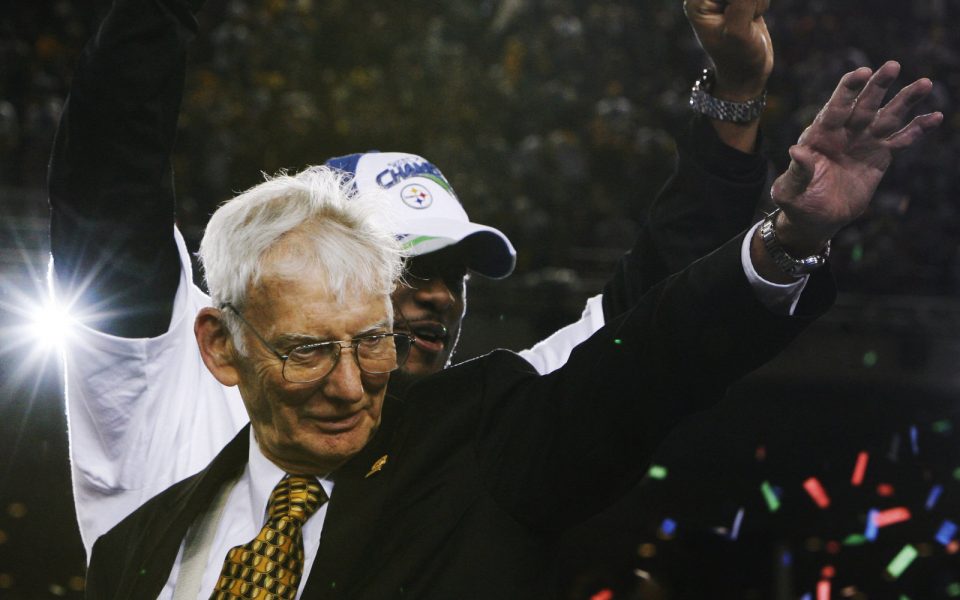 Pittsburgh Steelers owner Dan Rooney died on Thursday, the team announced. He was 84.

No cause of death was released.

Rooneys father, Art, purchased the Steelers in 1933 and the family has run the team since that time. Pittsburgh has won six Super Bowl titles under the familys leadership.

Few men have contributed as much to the National Football League as Dan Rooney, NFL commissioner Roger Goodell said in a statement. A member of the Pro Football Hall of Fame, he was one of the finest men in the history of our game and it was a privilege to work alongside him for so many years.

Dans dedication to the game, to the players and coaches, to his beloved Pittsburgh, and to Steelers fans everywhere was unparalleled. He was a role model and trusted colleague to commissioners since Bert Bell, countless NFL owners, and so many others in and out of the NFL. A voice of reason on a wide range of topics, including diversity and labor relations, Dan always had the leagues best interests at heart.

For my part, Dans friendship and counsel were both inspiring and irreplaceable. My heart goes out to Patricia, Art, and the entire Rooney family on the loss of this extraordinary man.

Rooney also led the charge of identifying minority head-coaching candidates while leading the leagues diversity meeting. The edict that teams with openings must interview at least one minority candidate became known as the Rooney Rule.

When the Steelers needed a coach after the resignation of Bill Cowher following the 2006, they hired Mike Tomlin, the first black coach in franchise history.

Rooney also was a key figure in helping end the 57-day players strike in 1982.

His first job with the club was as a water boy at 12. He graduated from Duquesne in 1955 and started working in the front office, leading to his eventual stint as the general manager.

More recently, Rooney served as U.S. Ambassador to Ireland from 2009-12.

Carolina Panthers owner Jerry Richardson is among the owners saddened by Rooneys passing.

My heart is heavy today as the passing of Dan Rooney leaves a void that can never be filled, Richardson said in a statement. No one in the National Football League provided me more friendship and counsel over the past 25 years than Dan, and I will always cherish our time together. Dan was a cornerstone of the National Football League and leaves a lasting mark on the game he loved both on and off the field.

His lifetime of service to his team, the NFL, his city and his country earned Dan the respect and love of so many. He will be dearly missed. Rosalind and I send our thoughts and prayers to theRooney family and the entire Steelers organization.

Dan Rooney was the conscience of the NFL while serving as one of the powerful influences recently and in the history of our league, Bisciotti said. While a winner and a competitor at the highest level, he was kind, classy and a true gentleman. He was a giant in our industry.

Mr. Rooney was so gracious, warm and welcoming when I joined the league. I feel blessed to have known him, and our prayers and thoughts are with his wonderful family.