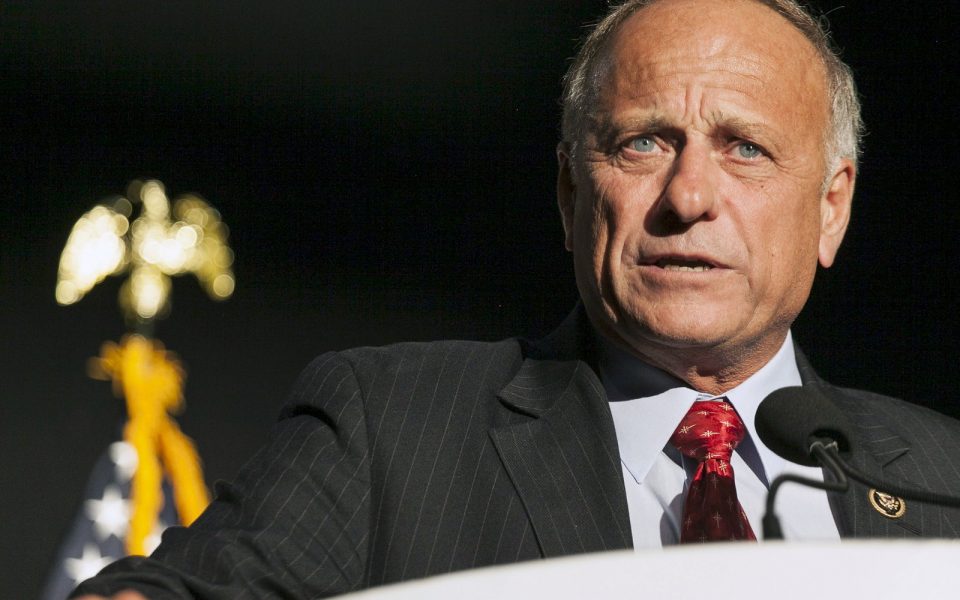 WASHINGTON Immigrant rights advocates were dismayed on Tuesday by reports that the first undocumented immigrant with active Deferred Action for Childhood Arrivals protections was deported under President Donald Trump.

Rep. Steve King (R-Iowa) had the opposite reaction.

First non-valedictorian DREAMer deported. Border Patrol, this ones for you, King tweeted, with a photo of a beer.

King is an immigration hawk who staunchly opposes the Deferred Action for Childhood Arrivals program, or DACA, and any other protections for so-called Dreamers, undocumented immigrants who came to the U.S. as children. He infamously said in 2014 that for every Dreamer who is a valedictorian, theres another 100 out there that weigh 130 pounds and theyve got calves the size of cantaloupes because theyre hauling 75 pounds of marijuana across the desert.

So its no surprise he had little sympathy for Juan Manuel Montes, a 23-year-old who came to the U.S. at the age of 9 and was detained and deported by the Border Patrol, first reported by USA Today on Tuesday.

Montes says a Border Patrol agent stopped him in Calexico, California, on Feb. 17 and did not allow him to retrieve his DACA documents or his ID, which he had left in a friends car. Lawyers for the Dreamer said in a complaint that Border Patrol agents pressured him to sign documents approving his removal that he did not understand, and they didnt provide him copies, allow him to see a lawyer or put him before a judge.

Customs and Border Protection spokesman Ralph DeSio said agents apprehended Montes minutes after he climbed over the fence from Mexico and that he admitted under oath to having entered the country illegally. He added that Montes had a past theft conviction and said his DACA status expired in August 2015.

DACA does not guarantee safety from removal, and some Dreamers have been deported after losing their protections. About 1,500 people have lost DACA status due to criminal convictions or gang affiliation, according to the Department of Homeland Security.

But Montes could be the first documented case of a Dreamer with active DACA status being deported. He had past criminal convictions for driving without a license and shoplifting, but his record did not exclude him from the program and his paperwork was not set to expire until 2018, according to USA Today.

Trump maintained the DACA program even though he promised to end it which King believes he should follow through on. But he also said he would give Immigration and Customs Enforcement and Customs and Border Protection agents more leeway to do what they thought was right, vastly expanding the scope of who should be considered a priority for deportation.

Still, the president and Homeland Security Secretary John Kelly have said DACA recipients would not be the target.

Sen. Dick Durbin (D-Ill.), a longtime advocate for Dreamer protections, said in a statement that he was disturbed by reports about Montes removal and had demanded an explanation from ICE.

Just last month Secretary Kelly promised me that no one with DACA would lose this protection unless they violated the terms of DACA, Durbin said. I intend to hold him to this commitment.

This article has been updated with comment from Customs and Border Protection.