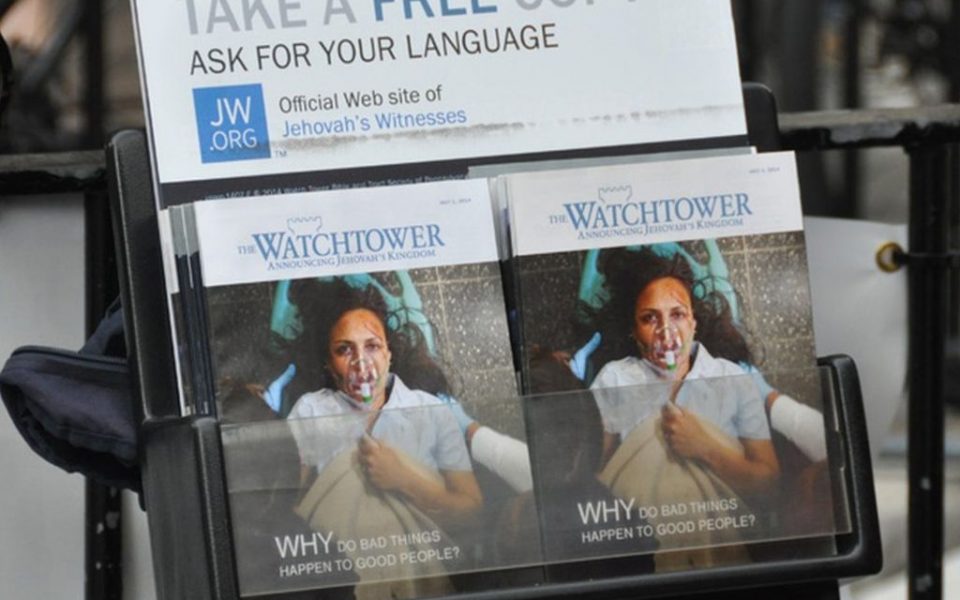 The ex-Jehovah’s Witnesses shunned by their families – BBC News

For some former Jehovah’s Witnesses, leaving the faith is not just the mark of losing your religion – it can also mean losing your loved ones. In many cases, friends and family are told to cut all ties with ex-believers, leaving them isolated and sometimes suicidal.

“I don’t speak to any of my family,” Sarah – not her real name – tells the BBC’s Victoria Derbyshire programme.

“Because of being ‘disfellowshipped’, I can have no contact.”

Last year, Sarah – in her 20s – was excluded by the Jehovah’s Witnesses in a process known as “disfellowshipping”, she says sparked by her refusal to live in an abusive relationship.

She claims her partner at the time had been violent towards her, at one stage leaving her with broken ribs.

Going to the police – and involving those from outside the religion – is heavily discouraged by Jehovah’s Witnesses, she says, claiming that elders within the faith refused to punish her ex-partner’s behaviour.

It was only when work colleagues noticed the bruising, and convinced her not to put up with the abuse, that she says she fled the relationship.

Sarah claims she was consequently disfellowshipped by the religion, and that her friends and family cut all ties with her.

This is because Jehovah’s Witnesses believe those outside the religion can be of detriment to their faith.

In a statement the religious group told the BBC: “If a baptised Witness makes a practice of breaking the Bible’s moral code, and does not given evidence of stopping the practice, he or she will be shunned or disfellowshipped.

“When it comes to shunning, Witnesses take their instructions from the Bible and on this subject the Bible clearly states, ‘Remove the wicked man from amongst yourselves.'”

The night she was disfellowshipped, Sarah says her mother refused to talk to her. Her father woke her up at 07:00 to kick her out of their home.

Responding to Sarah’s claims, the Jehovah’s Witnesses said that while it could not comment on individual cases, “violence, whether physical or emotional, is strongly condemned in the Bible and has no place in a Christian family”.

John – not his real name – became a Jehovah’s Witness as a young child when his parents decided to join the religious group.

But two years ago, he was disfellowshipped after he missed a Jehovah’s Witness memorial service – seen in the religion as an important event.

He had also begun to privately have doubts about some of the religion’s teachings – questioning the faith’s assertion that the end of the world is imminent, and that only 144,000 human beings will go to heaven.

His view on the religion was also tarnished after ones of his friends died, when a blood transfusion – which is not allowed in the faith – might have saved him.

John says he later discovered his wife had testified against him during the process that led to his disfellowship, which he believes placed a great strain on their relationship.

He left the family home – living temporarily in tents and caravans.

“It was a very isolating time. I didn’t have anyone, I felt quite suicidal,” he says.

He has now lost contact with his two adult children and siblings.

“Sometimes I send them a message saying, ‘I love you, I’m still thinking of you.’ But usually there’s no response,” he says.

According to the Jehovah’s Witnesses, the faith has more than 138,000 members in the UK, and more than eight million internationally.

Terri O’Sullivan left the religion 17 years ago, aged 21, and was kicked out of her home by her mother.

She now runs a support network for those who leave or are excluded from it.

She says she is yet to find a former Jehovah’s Witness who has not experienced depression, alcoholism, suicidal feelings or self-harm.

She adds that while not everyone goes through a formal disfellowship when they leave, their relationships seldom go on unaffected.

“With some ex-Witnesses,” she says, “some of their families will still talk to them – but it will always be strained.”

Jehovah’s Witnesses at a glance

Find out more from BBC Religion

Sarah says the loss of her closest family ties has been “very, very difficult” to cope with.

She is engaged, and aware she is “having to plan a wedding where your parents won’t attend”.

“I would class myself as an orphan, which is quite sad,” she says.

Her support network comes from her friends at work. When she left the faith, she says, they “rallied around” her, in contrast to what she had expected.

“These people I’d been told [by the religion] were awful, were bad association, and God was going to smite them all at Armageddon.

“Yet these people opened up their homes.”

Sarah is still, however, complimentary about most of the people within her former faith.

“There are good people in the religion, who believe they are saving people’s lives [by spreading the faith’s message],” she says.

“I look back with some happy memories, because they were the last memories I have with my family and siblings.

“But then I do have to look back and feel a lot of heartbreak that I’m never going to be able to sit down with them for a Sunday meal again.

“When they die, I probably won’t be invited to the funeral either.”