Previous post'I've come to rescue you': My grandfather at Dunkirk - BBC News
How close is Japanese knotweed getting to my home? - BBC NewsNext post 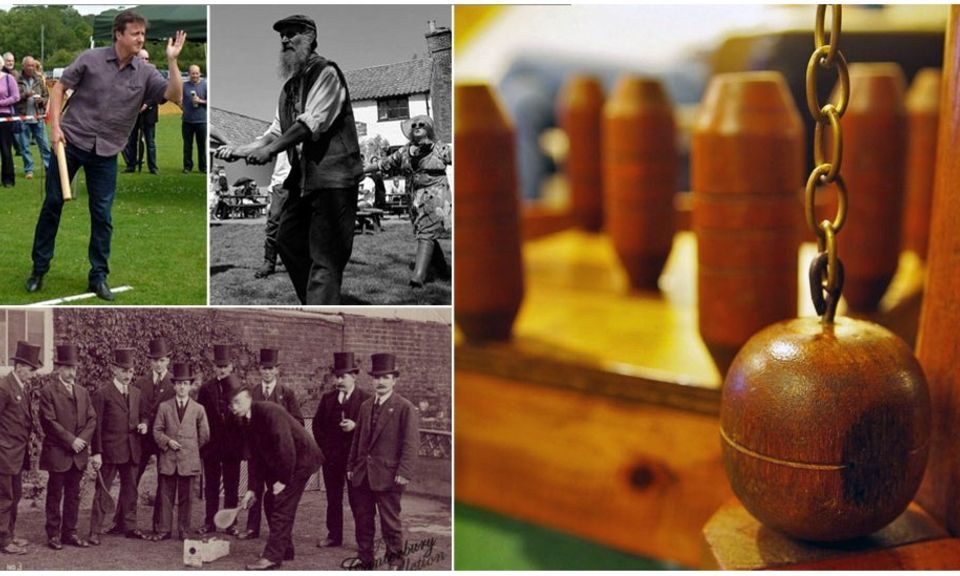 The weird and wonderful world of pub games – BBC News

“As long as there were pubs and inns there were always games,” says historian and ‘doctor of darts’ Patrick Chaplin. While his PhD is in the social history of that pursuit, the world of pub pastimes is far from restricted to the dartboard or the pool table. Anyone for a spot of dwile flonking or a game of devil among the tailors?

This game, which is played in the pub gardens of Kent, involves batsmen or women hitting a rubber ball that is fired upwards from a mechanical device – the trap.

Players attempt to strike the ball between posts at the other side of a pitch where the opposing team’s fielders are positioned.

“The pitch is 22 yards long, which is the same length as a cricket wicket,” he explains.

“It’s the only sport that I know of – and I use the term sport loosely – whereby you score runs without moving, so for a rather rotund fellow like myself it’s great.”

The league claims the game was once played by monks, and records show contests have been staged at Ye Old Beverlie in Canterbury – where the BBC’s Countryfile team played a match in 2011 – since the 16th Century.

This team game involves players throwing sticks at a small wooden block called a dolly, as they try to knock it off a short pole.

Arthur Taylor, author of Played at the Pub, suggests Aunt Sally – which is played in Oxfordshire and parts of Buckinghamshire – has rather grisly origins.

“It can be traced back to a barbarous business called ‘throwing at cocks’, when you threw sticks at a cock tethered to a post that if you killed you took home,” he says.

“What was barbarous turned into something that wasn’t, and the cock became a coconut shy… and eventually it became the game we know.”

Nick Millea, organiser of the Charlbury Beer Festival, which hosts the grandiosely-titled Aunt Sally World Championships, describes it as a “really sociable game”.

“It’s a chance for a load of people to get together and do a harmless thing like throw sticks at a little round white thing in the distance – dead simple,” he says.

Then prime minister David Cameron gave Aunt Sally a go at the festival in 2011, and Mr Millea believes the game is here to stay.

“It’s so embedded in the Oxfordshire psyche; it’s got to live on.”

Devil among the tailors

Alongside another traditional game, shove ha’penny, this venerable pub pastime features in a memorable scene in The Beatles film A Hard Day’s Night as an absent-minded Ringo Starr’s beer glass is smashed by a swinging ball.

Devil among the tailors is one of many variations of table skittles, which is claimed to be a forerunner to tenpin bowling.

Another variant is Northamptonshire skittles, in which players throw “cheeses” at the skittles and bounce them off the table’s cushions.

Karen Murden, landlady of the Stag Inn in Kimberley, Nottinghamshire, is the proud owner of a devil among the tailors table.

“It’s a very old, traditional pub,” she says. “We put older, traditional games in it rather than flashing lights and music.

“I inherited the table. It belonged to a previous landlord who had it as a boy, so it’s probably 90 to 100 years old.”

She describes devil among the tailors as a “very light-hearted” game, although she says the atmosphere can be “exciting and loud” when someone pulls off a flashy trick shot.

“It’s nice that the younger generation hasn’t seen anything like it. To them it’s new and novel, and they want to get stuck in and have a go.”

While a tongue-in-cheek 1967 Pathe clip describes dwile flonking as an “age-old custom”, pub game historians are agreed its origins are relatively recent.

“This is a new development,” Dr Chaplin says. “Like how most pub games originated, it was an automatic response to boredom.”

He says the game – also called dwyle flunking – was “probably invented by students”, while Mr Taylor believes “printers’ apprentices back in the 1960s” came up with the pastime.

It involves a dish cloth, or “dwile”, dipped in a bucket of beer which is then “flonked” at a member of the opposing team from a stick, or “driveller”, as he or she dances in a circle.

The points scored depend on where on the body a person is hit, with a head shot naturally worth top marks. A miss is termed a “swadger”.

For a forfeit, the “flonker” sometimes has to drink a pot of beer before the dwile is passed around the circle.

It is a messy tradition at the Lewes Arms pub, in East Sussex, which states that the “rules are impenetrable and the result is always contested”.

The game is also played in parts of Suffolk and Norfolk, where the Waveney Valley championships were held in May at The Locks Inn in Geldeston.

This game, whose origins are shrouded in the mists of time, is still played at Ye Olde Trip To Jerusalem, in Nottingham, which claims to be the oldest inn in England.

It involves competitors trying to attach a ring suspended on a string from the ceiling on to a hook, traditionally a bull’s horn.

“Nobody knows its origins,” Mr Taylor says. “It’s been around for centuries. It’s so simple it can appear anywhere.

“Twenty years ago I walked into a pub near Oldham and this massive game was on at Christmas time. It’d been brought by a lorry driver who’d seen it in a pub in Newark-on-Trent.

“I’ve seen it literally all over. It pops up like a mushroom.”

The game, which has also surfaced in the United States, is described by Dr Chaplin as “very difficult”.

“You don’t know where the ring’s going to go unless you’re an expert,” he says. “It’s potentially dangerous.”

Toad in the hole

As well as being the name of a much-loved English sausage-in-batter dish, toad in the hole is also a coin-tossing game played in East Sussex.

Players of the game – which shares similarities with another tossing game, pitch penny – launch coins on to a lead-topped table with a hole in the centre.

“I’m fascinated by the game,” Mr Taylor says. “It was dying out, then 15 years ago a bunch of enthusiasts revived it and suddenly it became all the rage again.”

Unlike pitch penny – where the tossers’ target is a wooden bench with a hole carved into it – a game of toad in the hole is reasonably easy to organise.

Garry Kaye, who plays for The Blacksmiths Arms in Offham as part of the Lewes & District Toad in the Hole League, says the game took off again because “quite a few pubs had tables in them and a few teams put them in their cars and visited other pubs.

“It’s a Monday evening out, having fun and beers with friends. That’s where it all comes from.”