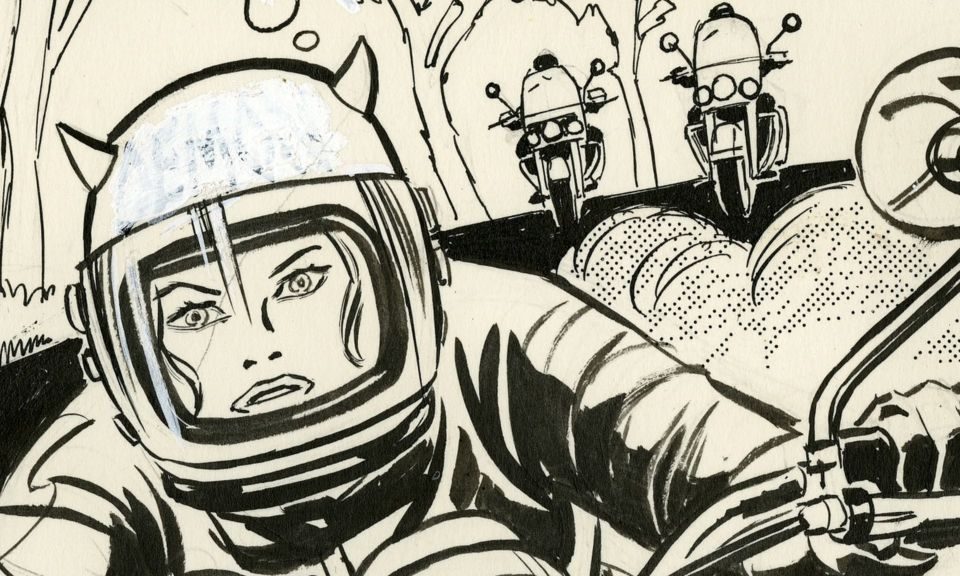 Perceptions that comics and graphic novels are just about city-wrecking scraps between superheroes and super villains are being challenged by a growing number of women in Scotland interested in the genre.

Among these women are a university masters degree graduate and artists and writers from across Scotland.

In their own words they tell of why they are passionate about comics and how they are so much more than stories about caped crusaders.

Among her current projects is creating a graphic novel called Abeyance, with her husband.

She believes that now is a good time for female artists, writers and readers, but also for comics generally, irrespective of gender.

“There are a few good reasons for it,” she says.

“Comics, the characters that are within them and the worlds that they create are now people’s playgrounds.

“People can write about them, dress up like them even create alternative universes or fan art for them.

“All of this of course is then posted to various online social media type things and perpetuate people’s interest in that particular fandom. That, in turn, sells more comics.

“I think the differences in attracting a male/female readership is subtlety small. Because I go to conventions and sell my material to people I get feedback and notice who is buying my artwork.

“Females seem to appreciate character relationships and that emotional connection between them a bit more. I know I do, as a female reader, get inspired when there’s great characters in the story with interesting relationships to others.”

Roberts believes there to be a healthy female audience for comics.

She says: “Girls don’t only seem to cosplay as their favourite characters they also buy comics too.

“I always get excited talking to people who are inspired by comics and even more so to learn that they have taken their passion even further, that it in turn has inspired them to create something, like fan art, fiction or even their own original stuff.

“To which I say to them: see you next year at the stall next to mine selling your own comic.”

French-born Louise Quirion is a graduate of University of Dundee’s MLitt course in Comics and Graphic Novels.

She is also the curator of Girls in Print, an exhibition running until 21 October in the university’s Tower Building Foyer.

The exhibition includes more than 30 original artworks from a number of Dundee publisher DC Thomson’s titles such as The Topper, Bunty and Twinkle.

“When I began looking into this area, I was amazed at the range of stories covered by girls’ comics,” says Quirion.

“As well as school and ballet stories, there are also sports stories, historical dramas, science-fiction and tales of the supernatural.

“This exhibition is a great opportunity to discover or re-discover the high school stories of the Four Marys or the space adventures of the Supercats, while appreciating rarely seen original art.”

To show how comics have evolved today, the exhibition also features work by current female comics artists such as Kate Charlesworth, Tanya Roberts and Gillian Hatcher.

During her research for the display, Quirion became interested by how publishers in the UK target readers with gender-specific titles, which is a different approach to other parts of Europe.

She says: “I find it fascinating because France and UK are geographically very close, and yet their comic cultures are based on very different ideas.

“I feel like this separation girls/boys is mostly a marketing strategy. They are still using it in Japan and it works great there.”

But she adds: “Everyone reads comics in France, whatever their gender or age is, so the best strategy is more to appeal to everyone.

“I know American comics are pretty popular right now, but I encourage anyone that likes comics to also read other things.”

TGC was set up to as a support network for women cartoonists across Scotland, and features in Louise Quirion’s Girls in Print exhibition in Dundee.

Gill Hatcher, editor and founder of the group, says: “The number of women and girls in Scotland both attending comic events and making comics has exploded in recent years.

“When TGC began in 2009 we were a very small tight-knit group, but the number of people getting in touch and asking to join keeps on growing.

“There are a lot more opportunities for young people to learn the craft of writing and drawing comics, and lots more channels for them to get their work out to a wider audience.

“And gradually, as more women have got involved in the Scottish comics scene, the more it has opened up to new creators who might have previously felt intimidated or unwelcome.”

Hatcher says the subjects women want to tackle through comic stories and art are wide-ranging.

She says: “Our contributors write about all sorts of subject matters, often highly personal and touching on politics, identity and feminism.

“There’s often a lot of humour in the stories we tell too.”

Hatcher adds: “Our latest anthology, That Girl Comic, featured our artists’ different takes on the theme ‘growing up’ and we ended up with a great mixture of childhood memories, teenage angst and present-day reflections, as well as some more surreal and whimsical interpretations.”

Stonebridge, a painter, craftworker and co-organiser of the Highlands’ popular but now defunct HiEx comic convention, is based in Lochcarron in Wester Ross.

Growing up in the Highlands, she recalls pouring over a comic her dad bought her when she was three or four.

“It wasn’t the Dandy and Beano I later came to love, but a ‘boys’ comic with sci-fi, action and crazy perilous monster stories in it. I loved it,” she says.

“I was an early reader, but didn’t really get what was going on, there was a giant rat man who was mugging people and being generally menacing.”

Stonebridge’s interest in comics was reignited later at art college when a friend showed her a copy of the British sci-fi and fantasy adventure comic, 2000AD.

She says: “It blew me away. I was the only other person I knew who read it, it was for a long time the only comic I knew.

“I even wrote part of my dissertation about it. I loved the escapism, the action, satire, punk attitude, fantasy and adventure. I was never a girly girl so stories of ballerinas and public school girls were never going to cut it with me.”

She adds: “My love of sci-fi went along similar lines, with a teacher taking a book off me when I was seven as it was ‘too old for me’.

“I still remember vividly the aliens, mutants and space paradoxes that excited me, and the feeling of resentment at being told it wasn’t for me.

“This is why I enjoy working with young people and encouraging their interests in comics, geek culture , genre fiction and art, because I think it is important to support them in their journey of discovery in order to foster creativity and imagination instead of closing doors.”

Stonebridge says a big challenge with comics is challenging the way female characters can be portrayed in the illustrations.

“There are lots more examples of strong female characters in comic books and film adaptations coming to the fore,” she says.

“2000AD always had some strong women, but often these were sidekicks to the main male character.

“The character Psi Judge Anderson is an interesting character, some writers and artists have given her real depth, and yet there still persists other artists who still portray her as a pouting doll with ridiculous breasts.

“A more consistent 2000AD female character was Aimee Nixon. She switched sides and her allegiances were muddy, but she was always fierce and kick-ass.”

“I love to see diversity in comics, characters who reflect the real world. There are always gnarly old men characters, but where are the women – apart from being super villains of course, because everyone knows that older women are always evil.”

All images are copyrighted.