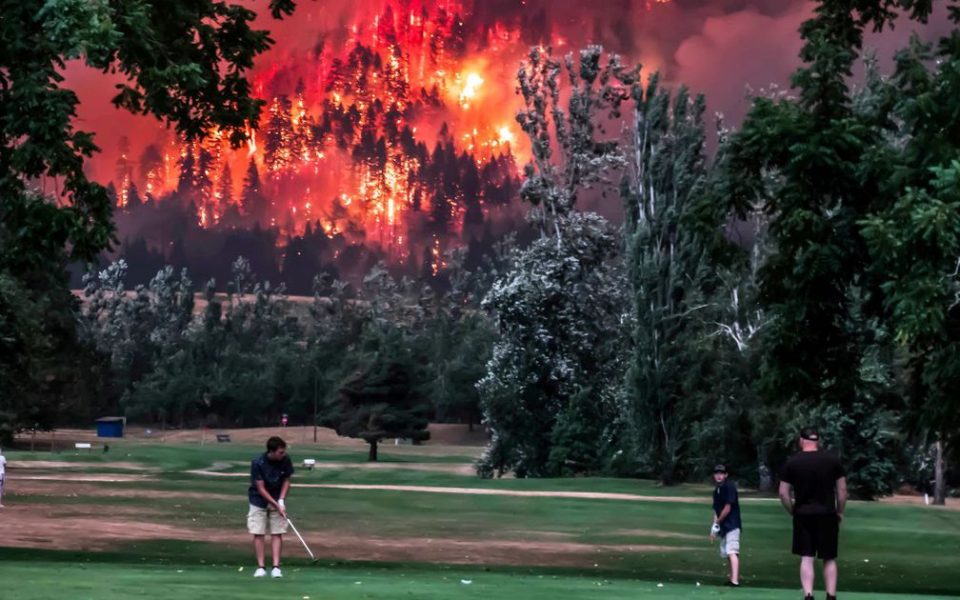 This wildfire photo is a portrait of America in 2017

An amateur photographer in Oregon just captured what some might call a portrait of America’s current state.

SEE ALSO: Summer 2017 feels like it’s on steroids – and it’s only going to get worse

Kristi McCluer’s depiction of a bunch of men casually golfing while a wildfire raged behind them went viral after it was tweeted out by David Simon, creator of The Wire and The Deuce.

He posted the photo to his 130,000 Twitter followers on Thursday, calling it “the money shot” of “visual metaphors for America today.”

In the pantheon of visual metaphors for America today, this is the money shot. pic.twitter.com/09COuDutBC

The image had nearly 100,000 retweets by Friday afternoon while the picture received over 53,000 upvotes on Reddit. And of course it inspired a ton of Photoshops and memes.

Contender on replace the “this is fine” meme. pic.twitter.com/okLyNjCXyk

McCluer told The Oregonian she snapped the breathtaking photo near the Beacon Rock Golf Course while hiking along the Columbia River.

The Washington native told the news outlet she loves to take her camera on hikes and creates calendars for friends and family.

Simon did not reference McCluer in his tweet about the photo. He has since tweeted out a link to the New York Daily News‘ story on McCluer, saying “all credit to the photographer.”

I did indeed see the uncredited shot in my feed and retweet, but yes, all credit to the photographer: https://t.co/sPFBVmEROj

The owners of Beacon Rock Golf Course confirmed to The Oregonian on Wednesday that the photos were indeed real.

McCluer told the news outlet she is a little overwhelmed by the reaction to her photos. “It’s a little weird to be honest,” McCluer said. “I am a very private person.”

WATCH: Summer 2017 feels like it’s on steroids – and it’s only going to get worse