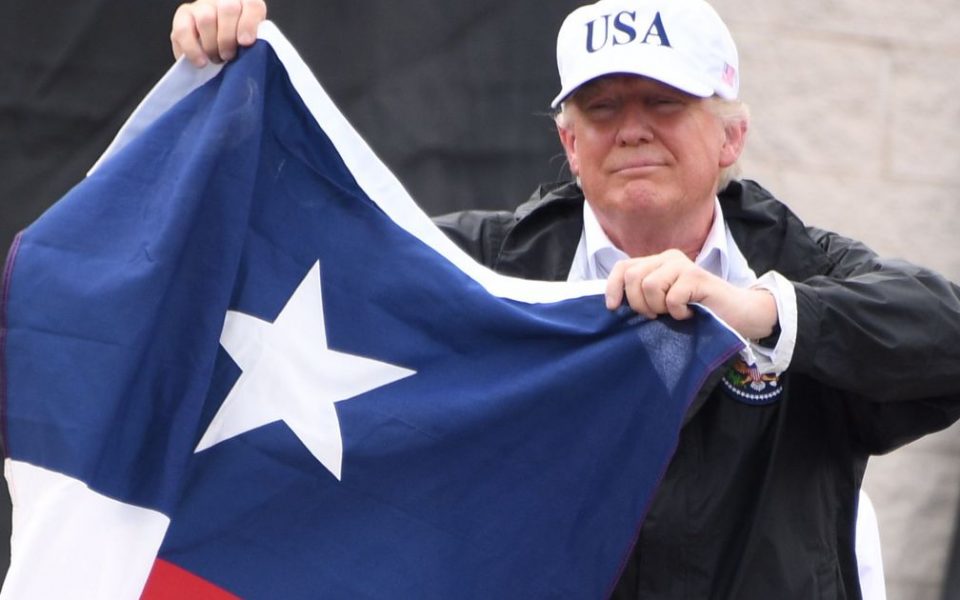 Trump visited Texas and just HAD to talk about crowd size

"What a crowd, what a turnout."
Image: JIM WATSON/AFP/Getty Images

After all these months it’s still unclear whether or not Donald Trump knows he’s not on reality television.

Since his inauguration the man has made his obsession with ratings and crowd size very clear, and on Tuesday when he visited Texas for a briefing on Tropical Storm Harvey relief efforts, he just couldn’t help himself from celebrating the really great press that came out of the storm.

During the trip to Corpus Christi, where Harvey made landfall, and Austin, Texas, Donald had two face palm-worthy moments that left the world questioning why on Earth he’s treating a natural disaster like an episode of reality television.

One came when he stood atop a platform outside and marveled at the crowd before him. “What a crowd, what a turnout,” Trump said into a microphone.

“What a crowd, what a turnout,” Trump said from atop this firetruck, addressing hurricane victims. pic.twitter.com/0EdsLctHDi

Naturally, people saw the president taking time out from his speech on the storm to admire the crowd of people who came to hear him speak as problematic.

Honestly, what is wrong with him? This is not a thing a normal human being says. https://t.co/qDhTla2IcH

“What a crowd. What a turnout.” pic.twitter.com/eoQ19vpQ5k

So @realDonaldTrump you go to survey the Hurricane damage and you start with “What a crowd, what a turnout… This is historic, it’s epic”?

According to a White House pool report, reporters on-site “heard no mention of the dead, dying or displaced Texans and no expression of sympathy for them. The message was services are coming and Texans will be OK.”

Earlier during the same trip, Trump also thanked FEMA administrator Brock Long for his service, saying he “has really become very famous on television over the last couple of days.”

Excuse us? Uh, yeah congrats to this FEMA administrator for getting some on-air time during a devastating and unprecedented storm that’s displaced huge numbers of people. He’s probably really jazzed to have gotten this fame, even though it came at a tragic cost, right? Nope.

Because “very famous on television” is SO important. https://t.co/ocpOlt8kb2

Missed that Trump praised FEMA head as “a man who has really become very famous on television.”

Everything is a reality show for him.

But with members of Trump’s administrations filing in and out of the White House as though they’re passing through a revolving door, it certainly isn’t the first time people have drawn the reality television show comparison to his presidency.

In fact, during Trump’s joint press conference with President of Finland Sauli Niinistö on Monday, he made a similarly controversial comment about ratings. When asked why he decided to pardon Arpaio during the early hours of Hurricane Harvey — reportedly even before signing a major disaster declaration for the state of Texas — Trump said he figured with the timing the ratings would be much higher than normal.

What will happen on next week’s episode of Trump’s White House? Who knows, but the ratings will obviously be tremendous.