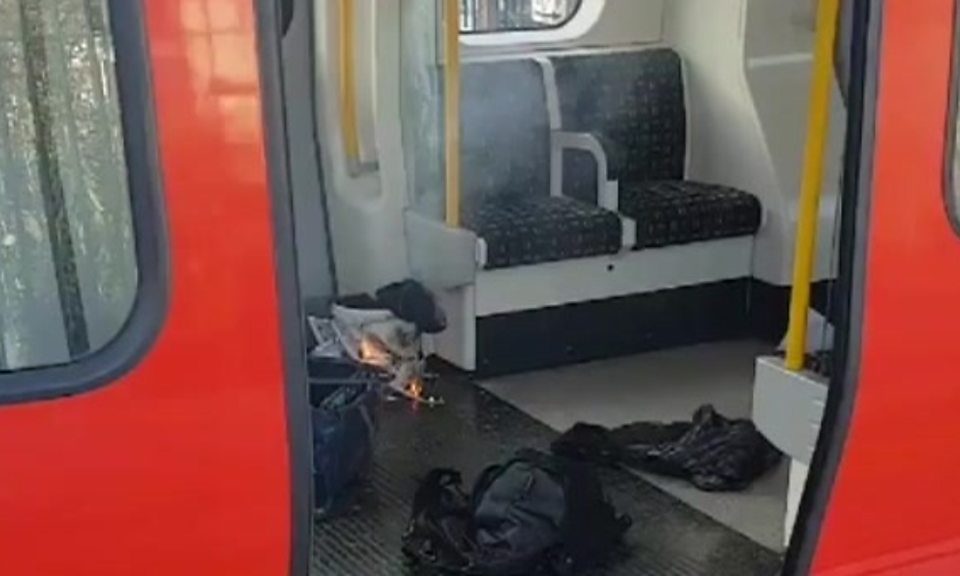 An “improvised explosive device” was detonated on a Tube train in south-west London during Friday’s morning rush hour, injuring 29 people.

The blast, at Parsons Green station on a District Line train from Wimbledon, is being treated as terrorism.

So-called Islamic State says it carried out the attack, which Prime Minister Theresa May condemned as “cowardly”.

A hunt is under way for the person who placed the device and the area around the station has been evacuated.

Specialist officers there securing the remains of the improvised device and ensuring it is stable.

Mrs May said the attack had been “intended to cause significant harm”.

She said the UK’s terror threat level would remain at severe – the second highest – but would be under review.

Speaking in Downing Street after chairing a meeting of the Cobra emergency committee, she said there would be an increased armed police presence on the transport network in London.

Hundreds of detectives and MI5 are investigating the attack, which took place at 08:20 BST on an eastbound train.

Assistant Commissioner Mark Rowley earlier refused to say whether anyone had been arrested.

Pictures taken of the train show a white bucket on fire inside a supermarket bag, with wires trailing on to the carriage floor. The BBC understands the device had a timer.

BBC security correspondent Frank Gardner said the bomb appeared not to have gone off.

US President Donald Trump has spoken to Prime Minister Theresa May to convey his sympathies for those injured in the terrorist attack, the White House has said.

President Trump pledged to continue close collaboration with the UK to stop attacks and combat extremism, the statement added.

US President Donald Trump had earlier tweeted that the “sick and demented” people behind the attack had been in the sights of the Metropolitan Police, prompting Mrs May to say it was not helpful to “speculate” on an ongoing investigation.

Chelsea and Westminster Hospital has been treating 14 people, with a “small number” of them being taken to its specialist burns unit.

Four people are being treated by Imperial College Healthcare and three at St George’s Hospital.

St Thomas’ Hospital in London said it had treated eight patients but they had now been discharged.

Mr Rowley asked the public to remain “vigilant”, but said they should “not be alarmed”.

He said anyone who took pictures or videos at the scene could upload them to ukpoliceimageappeal.co.uk.

London Mayor Sadiq Khan appealed for calm, saying the city would “never be intimidated or defeated by terrorism”.

Witnesses to the incident have described seeing at least one passenger with facial injuries, while others spoke of “panic” as alarmed passengers left the train at the station, which is above ground.

Anna Gorniak, who was in the same Tube carriage as the explosion, said: “I could see a fireball filling the carriage and coming our way. At that moment, I started to run.

“In my mind I was praying, I probably thought for a second, ‘That’s it, my life is over.'”

Passenger Peter Crowley was sitting in the carriage, travelling from Wimbledon, when the explosion happened.

He said his head was burned by a “really hot intense fireball above my head” and added: “There were people a lot worse than me.”

Chris Wildish told BBC Radio 5 live he saw a bucket in a supermarket bag with “low-level flames coming out of it” by the door of the rear carriage.

The bomb at Parsons Green was an improvised explosive device (IED) and, like those on 21/7, it didn’t work as planned.

The device’s initiator appears to have worked – but the main charge did not detonate. This could be because the bomb-maker had got the recipe wrong.

In the case of the 21/7 attacks, the attackers tried to create TATP, an explosive compound made from hydrogen peroxide, commonly sold as hair bleach, and other chemicals.

They added chapatti flour to make the explosion more powerful still. But their chemistry was incompetent – in fact so incompetent that the ringleader had no idea, when he strapped on his rucksack, whether his device was capable of detonating or not.

TATP was used in the Manchester Arena attack earlier this year – and it was also the chemical of choice for some of the Paris 2015 attackers and the men behind the Brussels Airport bombing the following year.

Emma Stevie, 27, who was on the train when the explosion happened, said she was caught in a “human stampede” and crush on the station steps as people rushed away from the train.

“I wedged myself in next to a railing, I put myself in the foetal position,” she said.

“There was a pregnant woman underneath me, and I was trying really hard not to crush her.

“I saw a poor little boy with a smashed-in head and other injuries. It was horrible.”

London has again fallen victim to a terror attack, targeting commuters on their way to work and visitors venturing out into the city.

With 22 people treated in hospital, this bustling part of zone two was left confused and shocked, waiting anxiously for an explanation.

Olaniyi Shokumai was riding the Tube on the way to a training course, with his headphones plugged in and listening to music – just as he would on any other journey.

After the train pulled into Parsons Green station, however, things became far from ordinary.

“I looked to my left and I saw lots of people running out. There were a lot of people just stamping on each other and I saw someone jumping over [them].

“There was a woman on the floor and she couldn’t breathe. I thought, ‘This has got to be serious for people to do that.'”