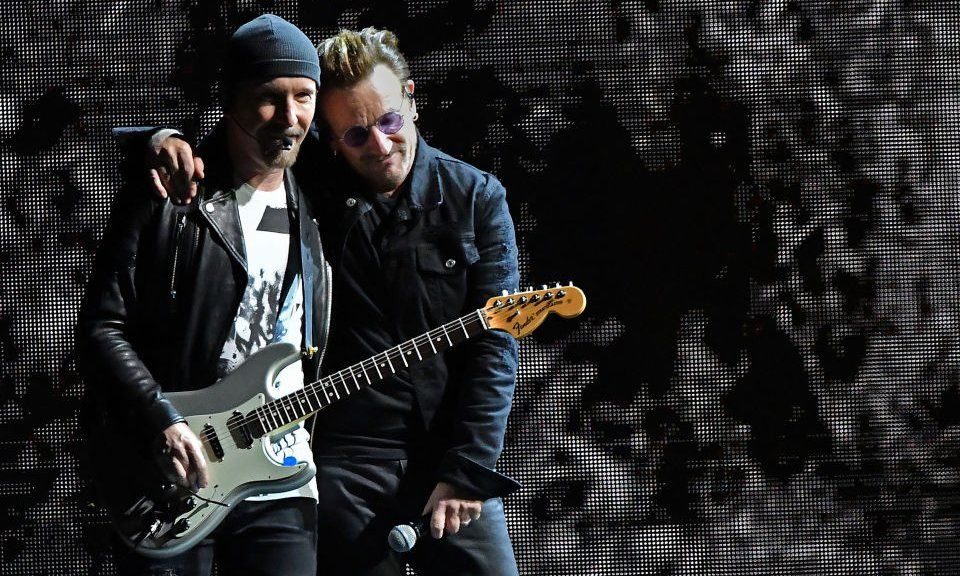 Rock band U2 paid an emotional tribute to murdered MP Jo Cox as they brought their Joshua Tree tour to the UK.

Bono, who worked with the MP on the Make Poverty History campaign, dedicated Ultraviolet (Light My Way) to her memory.

“She lived her life championing the lives of others,” he told the audience at London’s Twickenham Stadium.

Mrs Cox, 41, was shot and stabbed in June last year during the EU referendum campaign.

The tribute was one of several moments when U2 paused to acknowledge global events, including the recent terror attacks in Manchester and London.

For their encore, the band asked Noel Gallagher on stage to sing Don’t Look Back In Anger, which became an unofficial anthem of resilience in Manchester after a suicide bomber killed 22 fans outside an Ariana Grande concert in May.

Gallagher also dedicated the song to the victims of the Grenfell Tower disaster.

A day earlier, U2 had invited 50 of the firefighters who tackled the blaze to watch their rehearsals and soundcheck.

And Bono echoed Jo Cox’s maiden speech to Parliament – “we have more in common than that which divides us” – as he made a plea for tolerance towards immigrants.

“Us Irish are immigrant people,” he said, “and of course we came here into this great, Great Britain and we thank you for giving us safety and sanctuary for all these years.

It was a testament to U2’s experience and sincerity that these moments did not overshadow or unbalance the evening; which was, at heart, a celebration of their career-defining album The Joshua Tree.

Written against the backdrop of the Cold War, The Joshua Tree reflected the two sides of the American dream, with the Irish band seduced by its glamour but repelled by what bassist Adam Clayton “the bleakness and greed” of the Reagan era.

Thirty years later, it remains an eerily relevant ode to a divided America.

“It seems like we have come full circle from when The Joshua Tree songs were originally written, with global upheaval, extreme right wing politics and some fundamental human rights at risk,” said guitarist The Edge earlier this year.

So while most bands revisit classic albums as an exercise in nostalgia (or luring back lost fans), U2 seemed energised, even hungry on this anniversary jaunt.

The tour itself boasts technology that would have been unthinkable in 1987 – from the sampled instruments that bolstered their sound; to the 200-foot, 8K LED video wall that formed a backdrop to the set.

At the start of the show, however, U2 spurned both those luxuries.

He was soon joined by his bandmates, who played a four song pre-history of The Joshua Tree, facing each other in a circle, like the Dubliners who put on their first London shows 38 years ago, using 3,000 they’d borrowed from their families.

Performing without spotlights or video screens in the broad daylight was a brave move in front of 80,000 fans – but it brought the best out of both sides.

The audience were forced to focus on U2, and U2 were forced to play their hardest, as Sunday Bloody Sunday led into New Year’s Day, followed by Bad and their breakthrough single Pride (In The Name Of Love).

The raw power of those songs – more often reserved for encores – set the stadium on fire. Grown men played air guitar and bellowed the choruses, clasping each other around the shoulders when they weren’t punching the air.

For once, Bono was humbled, saying: “Thank you for letting us back into your lives.”

With the crowd still singing the chorus to Pride, the band moved to the main stage, and played Where The Streets Have No Name silhouetted against the burnt orange colour of a sunset.

This was exactly how the original Joshua Tree tour began in 1987 and it proved similarly effective 30 years later.

Indeed, the screens were consistently used to great effect. I Still Haven’t Found What I’m Looking For was set against a slow-moving shot of a desert highway; while With Or Without You saw the band play against dramatic time-lapse footage of Death Valley.

Later, before Exit, they showed a clip from the 1950s TV Western Trackdown, in which a shady con-man named Trump tries to frighten the residents of a small town into building a protective wall.

Rather than preach to the audience, as he has in the past, Bono simply let these clips – and the music – do the talking.

The star, who recently turned 57, was in better voice than on previous tours. What he has lost in range, he has gained in depth and gravitas.

When he sang Mothers Of The Disappeared, accompanied by a video of women holding candles in honour of the young Chilean men murdered by Augusto Pinochet, the purity of his emotion echoed around the stands.

That song concluded the Joshua Tree section of the show; freeing the band up to play some crowd-pleasers for the encore.

They raced through Beautiful Day, Elevation and Vertigo – three songs that exposed how U2 stopped soul-searching in favour of stadium-filling in the 21st Century.

In the mosh pit, they were a highlight, but elsewhere they felt like the musical equivalent of a Happy Meal.

Achtung Baby’s Ultraviolet and One felt more nourishing – raising hopes that U2 will tour that album when it reaches its own 30th anniversary in 2021.