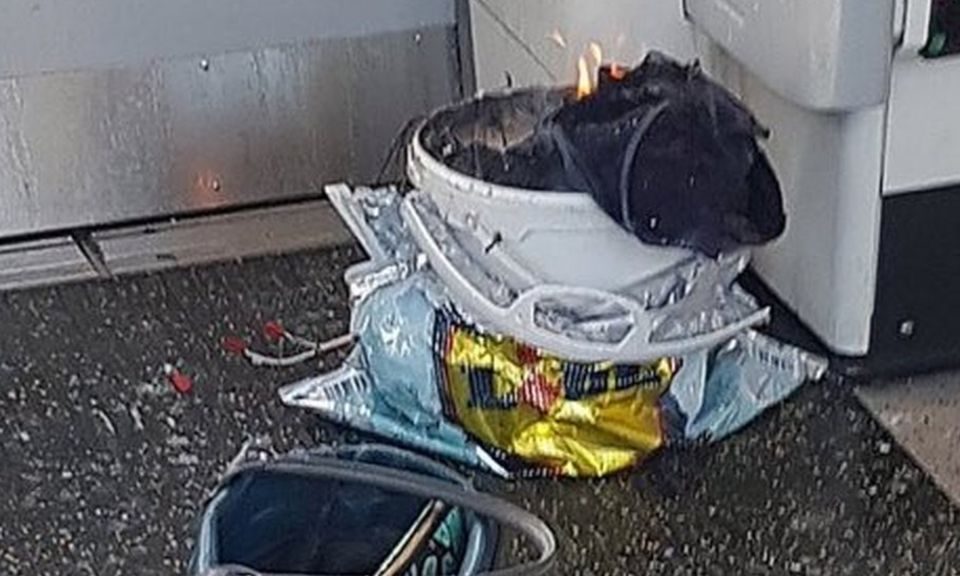 The UK terror threat has been increased to its highest level as police continue the hunt for the person behind the Tube bombing in south-west London.

The prime minister said the threat was now critical, meaning an attack is expected imminently, after a device was detonated at Parsons Green station.

Police said some 1,000 armed officers would be seen across the country after military assistance was requested.

So-called Islamic State has said it was behind the attack, which injured 29.

Mrs May said the military would be providing support to police and would replace officers on guard duty at national infrastructure sites that are not accessible to the public.

Police Scotland said it would be increasing the number of armed officers on patrol, particularly at key locations and crowded places.

The use of the military to assist police has been done under the first phase of Operation Temperer, a government plan to deploy troops to help police following major terrorist attacks, which was activated for the first time on 23 May following the Manchester Arena attack.

Mrs May said: “The public will see more armed police on the transport network and on our streets, providing extra protection.

“This is a proportionate and sensible step which will provide extra reassurance and protection while the investigation progresses.”

Twenty-nine people have been treated in hospitals, mostly for burns, following the attack at 08:20 BST on Friday on the eastbound District Line train from Wimbledon.

He said the assistance from the military would “provide reassurance” across the country.

Mr Rowley said hundreds of police officers had been “trawling” through CCTV to find those responsible for the attack.

He said detectives were only aware of one device and refused to be drawn on details of the suspects because of the “covert” nature of the operation.

Mr Rowley also said it was “very routine” in incidents of this kind for IS to say it carried out the attack “whether or not they’ve had any previous engagement with the individuals involved”.

What does terror threat level mean?

A word of caution about “imminence”.

The terror threat level was previously raised to critical in May after Manchester.

Then it was lowered again days later after it became clear to intelligence assessors in the Joint Terrorism Analysis Centre that an attack wasn’t imminent.

Then we had two more incidents – Borough Market/London Bridge and Finsbury Park.

What does this tell us?

Analysts sometimes only have glimpses or impressions of what they think is going on.

Pictures taken of the train showed a white bucket on fire inside a supermarket bag, with wires trailing on to the carriage floor. The BBC understands the device had a timer.

BBC security correspondent Frank Gardner said the bomb appeared not to have gone off properly.

Earlier, US President Donald Trump spoke to Prime Minister Theresa May to convey his sympathies for those injured in the terrorist attack, the White House said.

President Trump pledged to continue close collaboration with the UK to stop attacks and combat extremism, the statement added.

US President Donald Trump had tweeted that the “sick and demented” people behind the attack had been in the sights of the Metropolitan Police, prompting Mrs May to say it was not helpful to “speculate” on an ongoing investigation.

Chelsea and Westminster Hospital is treating 14 people, with a “small number” of them taken to its specialist burns unit.

Four people are being treated by Imperial College Healthcare and three at St George’s Hospital.

St Thomas’ Hospital in London said it had treated eight patients but they had been discharged.

Mr Rowley asked the public to remain “vigilant”, but said people should “not be alarmed”.

He said anyone who took pictures or videos at the scene could upload them to ukpoliceimageappeal.co.uk.

‘I could see a fireball’

Anna Gorniak, who was in the same Tube carriage as the explosion, told the BBC: “I could see a fireball filling the carriage and coming our way. At that moment, I started to run.

“In my mind I was praying, I probably thought for a second, ‘That’s it, my life is over.'”

Passenger Peter Crowley was sitting in the carriage, travelling from Wimbledon, when the explosion happened.

He said his head was burned by a “really hot intense fireball above my head” and added: “There were people a lot worse than me.”

Chris Wildish told BBC Radio 5 live he saw a bucket in a supermarket bag with “low-level flames coming out of it” by the door of the rear carriage.