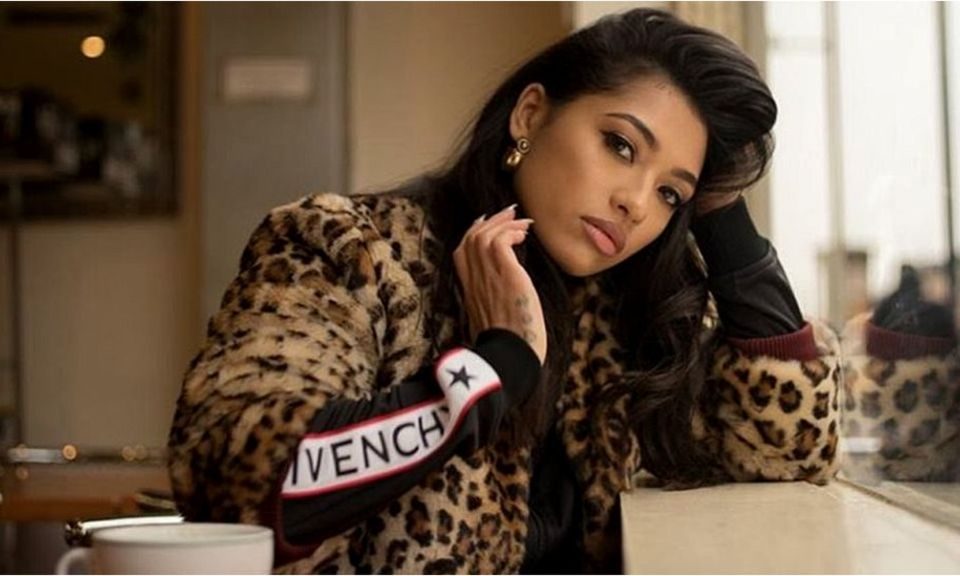 Vanessa White on life after The Saturdays – BBC News

She made her name as the youngest member of girl band The Saturdays – but Vanessa White has ditched the squeaky clean pop of All Fired Up and What About Us for an altogether more intriguing foray into sultry and infectious R&B.

It’s two o’clock on a crisp November day and Vanessa White saunters up to the gates of Ealing Studios in west London.

The film studio has played host to Shaun Of The Dead, Bridget Jones and the entire “downstairs” set of Downton Abbey – but she’s not here to film a cameo (“Can you imagine?” she giggles).

Instead, the 27-year-old climbs the fire escape of a dilapidated high-rise building, enters a propped-open door and navigates the corridors to a small back room that’s been converted into a recording studio.

Like all such facilities, it’s painted black and littered with empty liquor bottles. The walls are haphazardly decorated with polaroids of previous occupants – including US hitmakers The Chainsmokers – and, in the corner, there’s a tiny figurine of Ariel from The Little Mermaid.

Inside, Vanessa’s producers are ready and waiting, sorting through various tracks they’re hoping she might choose for her forthcoming EP.

But first, the singer has a confession: “I’ve got a sore throat and I’m a bit hung over.”

It doesn’t seem to matter. If anything, the consensus is that a husky voice is better for the material – a sultry and sumptuous serving of downtempo R&B; all heavy breathing and soaring harmonies.

Staving off the hangover with a “nourishing” lunch box, Vanessa explains her musical state of mind to the team.

“Everything I’m doing now is so dark,” she says, cueing up a song on her phone. “Not like I-want-to-kill-myself dark, but it’s quite angry.”

One of the tracks – tentatively called Trust – is seething with vitriol.

“I won’t stroke your ego,” she spits. “I’m onto you, I’m onto you. Don’t underestimate my intelligence.“

The song was inspired by encounters with “snaky people” in the music industry, she explains.

Specifically, it tackles a toxic situation in her immediate team that ended up “with the lawyers” last year.

She can’t discuss the details, but says her solo career was significantly delayed as a result: The EP she’s working on today was originally due last summer.

“There were certain songs I loved that I couldn’t use any more,” she explains. “So I’ve basically had to start again, which is why it’s taken this long.

“The silver lining is it’s given me something to write about. I’m in a much better position now, mentally.

“I used to get so scared of going in the studio with people I didn’t know but now, you could put me anywhere and I’d be fine.”

Vanessa certainly takes charge in the studio. Having brought the producers up to speed, she sits cross-legged on a sofa as they scroll through a few skeleton songs, looking for “an uptempo track with a dark heart”.

One by one, Vanessa dismisses them. “That’s too light,” she says of one. “I’m not instantly drawn to it,” is her verdict on the next.

After half a dozen tracks are waved off, engineer Day Decosta brings up a simple loop built around a gooey, pulsing bass groove.

Vanessa instantly sits up, alert. “Oh, I like this.”

She starts ad-libbing vocal riffs over the top, trading ideas with co-writer Celetia Martin, a former vocalist for Groove Armada whose credits include Skepta, Conor Maynard and, yes, The Saturdays.

Within minutes, she heads to the vocal booth. “I don’t really know what I’m doing right now,” she laughs. “I’m just going to sing loads of random nonsense.”

Slowly, painstakingly, the song takes shape. Some of the improvisations stick and are pieced together into a coherent melody. Every so often, Vanessa emerges from the booth to kneel on the floor with Celetia, and the pair go back and forth over lyrics and harmonies.

When inspiration dries up, they scroll through Instagram, gossip about TV box sets, and goof off doing the Mannequin Challenge for Vanessa’s Instagram page.

Conversation eventually turns to the singer’s upcoming holiday, a “juice retreat” in Portugal, where solid food is forbidden for an entire week.

It sounds awful (although photos from the journey suggest otherwise) – but it’s apparently the standard sort of torture female pop stars endure before the promotional round of video and photo shoots begin.

“It sounds worse than what it was,” laughs the singer when we catch up four months later.

“Honestly, if you were hungry it wasn’t like they starved you. They added more to the smoothies or they’d give you a piece of fruit. It was actually fine.

“I feel like I need another one now, that’s the problem!”

In any case, the 27-year-old counts dressing up and being photographed as a perk of her job… although it wasn’t always that way.

“When I was in The Sats, it actually got a bit boring having to be made up every single day,” she says. “I stopped appreciating it.

“Now I can come to the studio looking like this and it’s fine. Dressing up has become more of a treat again.”

Back at Ealing Studios, work continues late into the night – long after the BBC has left the building, having contributed precisely zero to the writing process.

The song is ultimately destined for the scrapheap, but Trust (completely overhauled and re-titled Trust Me) makes it onto Vanessa’s Chapter Two EP, which was released last Friday.

As she predicted, it set the tone for a collection of brooding neo-soul that’s surprisingly candid about anger, lust and sexuality. Fans of The Saturdays’ chirrupy chart fodder are in for quite a surprise.

“I guess people are going to question it,” she admits of her new direction. “But I feel pop is not very me at the moment.

“It took a bit of time to find a sound that was completely right for me. Now I feel like I’ve really nailed it, and it’s obvious it’s coming from me. Once people believe that, you’re half-way there.”

Certainly, the sophisticated harmonies and complex ad-libs reflect the US singers she grew up idolising – Janet, Alliyah, Brandy and Mariah – without sounding like a cheap, plastic counterfeit.

“We’ve had a problem with that in the UK in the past,” she acknowledges. “I don’t know why we haven’t really got the sounds right before – but this is what I listened to for years and years, so I guess that’s where it’s come from.”

The EP has been well-reviewed on the sort of music sites that would have given The Saturdays a wide berth. But it’s hard to see where the music fits in the current charts, crammed full of Ed Sheeran’s acoustic pop and The Chainsmokers’ emo EDM.

“To be honest with you, I’m not even thinking about that,” says the singer. “With everything that’s happened this year, including the label stuff, I’ve ended up doing this on my own – and at this point I’m preferring it, to be honest.

“I feel like I have to run with this. I’m not going to be hard on myself and expect it to be [huge] at this point.

“Whatever happens will happen.”

Vanessa White’s Chapter Two EP is out now on Salute The Sun Records.