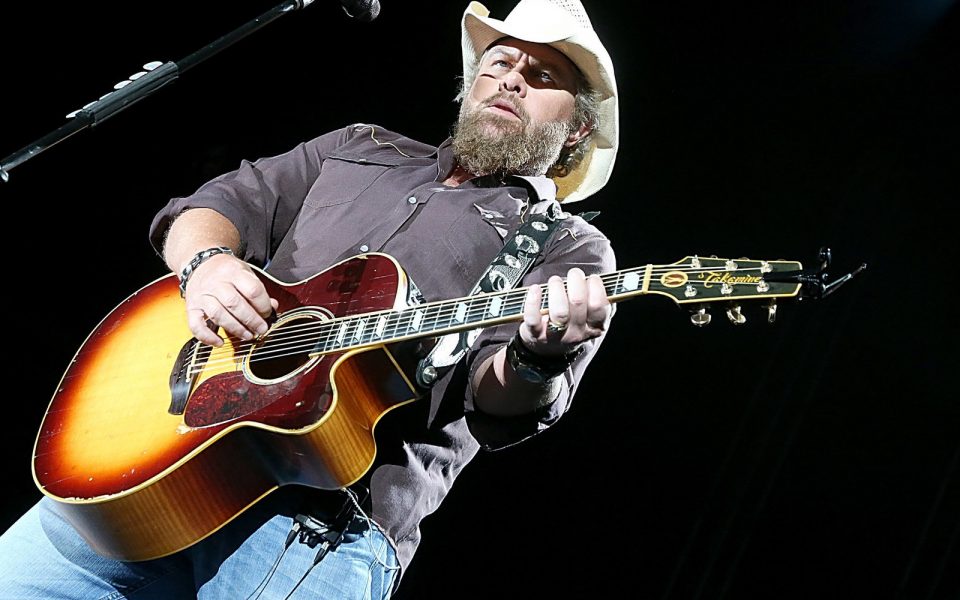 Toby Keith performed a concert for an audience of men in Saudi Arabia during President Donald Trumps diplomatic visit on Saturday.

Keith,author of a song parenthetically titled The Angry American, performed the free show alongside Saudi singer Rabeh Saqer in the nations capital, Riyadh, on a stage lined with red, white and blue lights and American flags.

Some in attendance captured photos and video of the historic event to share on social media.

Keith played some of his own material, including the song Shouldve Been A Cowboy, in addition to some instrumental music with Saqer.

One Twitter user noted that no one seemed to know who Keith was the crowd went nuts for Saqer but overall the show was fun.

New York Times reporter Ben Hubbard tweeted a photo of the crowd of men, some of whom snapped pictures or filmed the show on their phones.

An Associated Press reporter stated on Twitter that Trump caught part of the show as he and first lady Melania Trump did a slow roll past a live stream in a golf cart. (The White House travel pool also caught the performance, reporter Julie Pace noted.)

In Riyadh, Trumps visit was promoted with billboards sporting his face next to that of King Salman on highways lined with Saudi and American flags.

Trumps visit to Saudi Arabia is his first overseas trip since taking office. He is scheduled to meet with leaders of Muslim countries to discuss relations. So far, he has reportedly kept to his talking points and discussed job creation between Saudis and the U.S.

The president is also set to visit Israel, the Vatican, Belgium and Italy.

Some on Twitter had previously observedthat Keith, author of songs I Like This Bar and Drunk Americans, was an unexpected choice to perform in the highly conservative Saudi Arabia, which forbids alcohol and prevents unrelated men and women from mingling in public. The country singer is known for inserting strongly pro-American themes in his music.

Citing his duty to perform for his country, Keith sang at Trumps inaugural ceremony in January. Later, hetold CNN that he hate[s] politics and weve never had a leader in this country that I agreed with across the board on everything they do.

It seems like we get divided more and more all the time, he told the outlet.

Catch a bit more of his Middle East performance below.