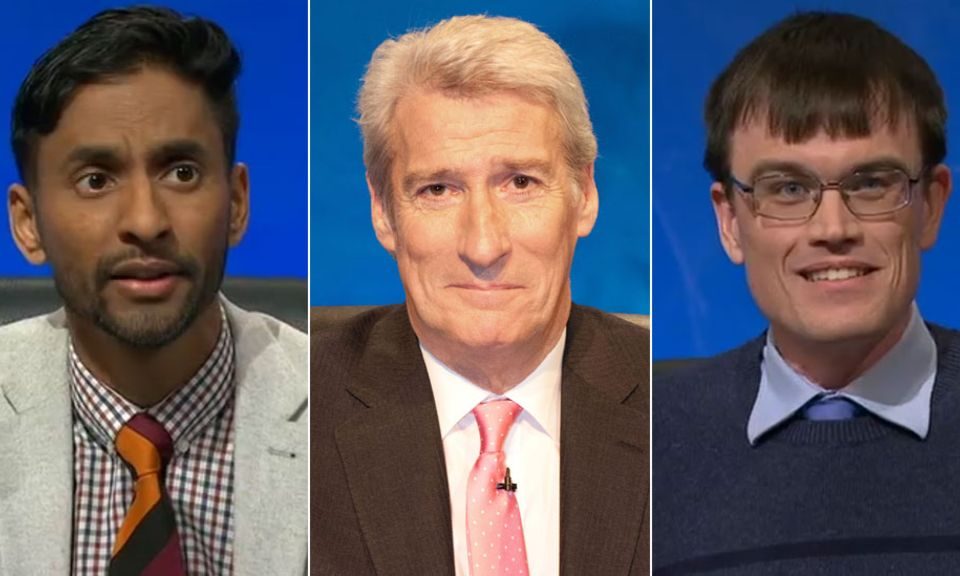 University Challenge is, quite simply, the most fiendishly difficult quiz show on TV.

Most of us can just about get a few questions right on Eggheads or The Chase – but few of us would have a chance against Jeremy Paxman.

With many of its viewers totally flummoxed by the questions – perhaps it’s not surprising that the BBC Two quiz show tends to go viral for other reasons.

Namely, the quirks of its contestants.

Eric Monkman and Bobby Seagull have been the breakout stars of the current series (more on them in a minute), but they’re far from the first to find fame on the show.

The invention of social media has given the programme a new lease of life and helped many contestants develop their own cult following.

“One funny moment or question can be so easily shared on Twitter now – it’s the same when something rude happens on Countdown or someone makes a fool of themselves on Pointless.”

Eames thinks another reason the show has found a new audience is how much more fashionable it has become to be super-smart.

“In the last few years, everyone loves calling themselves a geek or a nerd, even though in the real world they might not be,” he said.

“Shows like The Big Bang Theory have recently flourished. So you when someone genuinely seems to have some geeky superpowers like Monkman, we like to big them up.”

Ahead of this season’s final on Monday evening, let’s take a look back at a few of University Challenge’s viral sensations:

Monkman in paraticular inspired a legion of online fans who identified themselves with the hashtag #monkmania.

His facial expressions and tendency to deliver answers with an upward inflection won him a place in the hearts of many viewers.

He and Seagull each went viral in their own right before they finally faced each other on screen in the semi-final, where Monkman narrowly edged victory.

“I would say Monkman is in the all time top five [contestants],” The Independent’s James Rampton told the BBC.

“There’s a tendency in our culture to be very homogeneous, everyone must be cool, be good looking. But Monkman, I hope he wouldn’t mind me saying, is a bit of a geek.”

Monkman and Seagull, it later transpired, were friends off-air and caught the train down to London together when they appeared on The One Show last month.

At this point we’d usually demand they be given their own TV show – but we’re pretty sure we’d never understand anything they were saying.

One of the most memorable University Challenge contestants of recent years was Gail Trimble, of Corpus Christi, Oxford.

She answered around two thirds of the questions on her own, winning more points than all three of her teammates combined.

Her performances quickly caught the attention of viewers, with many suggesting she was the smartest-ever contestant.

She was particularly popular with a certain genre of men’s magazines, who at one point asked whether she would ever consider a career change.

“My brother received a Facebook message from Nuts, saying ‘Can we have your sister’s email address, we want her to do a tasteful shoot’,” Trimble told BBC Breakfast.

“So he sent them a reply saying ‘Seriously mate, would you send your sister’s contact details to Nuts?'”

The name might not ring a bell – but Ralph Morley was the bravest contestant of them all: the man who spoke back to Jeremy Paxman.

Here’s how the glorious exchange went:

Paxman: “During the 20th Century, who held the position of prime minster of the United Kingdom for the…”

Paxman: [Looking shocked] “How did you know I was going to ask for the longest period of time?

Morley: “Well what else was it going to be?”

Paxman: “Okay well let’s see if you get these bonuses right. They’re on French land borders, you smart arses.”

We salute you, Ralph.

In 2015, Oscar Powell of Peterhouse, Cambridge took the concept of facial expressions to a whole new level.

The Geological Sciences student, who looks a little bit like Michael Gove, had one of the most animated human faces in the history of human faces.

If he was struggling to answer a question, his jaw would drop, his face would scrunch up or his tongue would poke out as he tried to arrive at the answer.

After huge reaction on social media, Powell tweeted: “Yes, I know I’m odd.” But his fanbase continued to revel in his performances declare their love for him.

Eames says: “It used to be rare for normal people to come famous off the back of a TV show, but the line between celebrity and non celebrity is so blurred now.

“Ten years ago, someone could appear on the programme but be forgotten again the next day, but that’s not the case anymore.

“As a result, people who appear on shows like this fall under the celebrity bracket, so there’s a potential for them to become fair game to viewers.”

Long before they were famous, some of Britain’s most distinguished brains made their first TV appearances on University Challenge.

Actress Miriam Margolyes even claims her appearance on the programme in 1963 marked the first time anybody had ever said the f-word on TV.

In 2011, she told Graham Norton: “I got a question wrong, and I [swore], and they bleeped me out so you saw my face [saying the word], but nothing actually came out.”

Had Twitter been around in the 1960s, we’re pretty sure that would’ve gone viral.