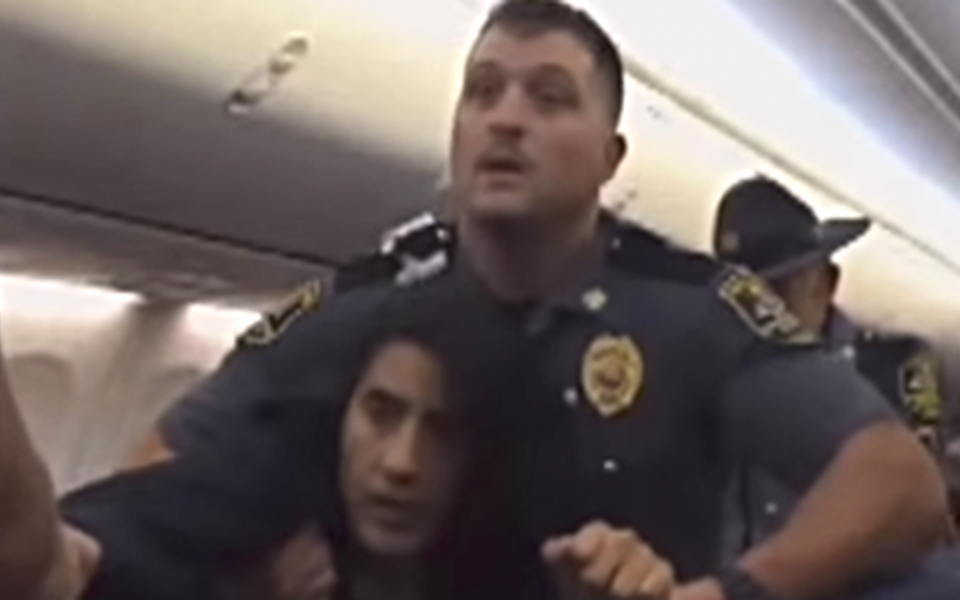 Woman with dog allergy refuses to get off plane, so cops push her off

A woman was forcibly removed from a Southwest flight Tuesday, but this time around the passenger is getting very little sympathy online.

The woman, identified as 46-year-old Anila Daulatzai from Baltimore, had complained about two dogs on her flight from Baltimore-Washington International Airport to Los Angeles. She said she was deathly allergic, but when crew informed her they couldn’t remove the dogs, one of which was a service dog, she was told to leave the plane.

That’s when things went south. After the woman couldn’t show medical papers about her allergies and refused to leave the plane, law enforcement arrived to remove her, Southwest said in a statement. She’s since been charged with disorderly conduct, failure to obey a reasonable and lawful order, disturbing the peace, obstructing and hindering a police officer and resisting arrest, but released by authorities, according to KTLA.

A low-quality video recorded by another passenger shows the woman struggling on Flight 1525 with officers down the aisle of the plane. The video is embedded at the top of this story.

At one point she tells the officers her father has a surgery scheduled and to not touch her, while one of the officers grabs her from behind and shouts. Other passengers urge her to walk off the plane on her own. When an officer grabs her, she yells, “Don’t touch me!” He loudly demands “Walk!”as a response.

“Geez, lady just get off the plane,” another passenger says as she’s pushed down the aisle. More chatter can be heard about how she said she had allergies.

The comments caught on tape are similar to the response online. Many seem to think the woman brought her troubles upon herself and she could have handled the situation better. It also doesn’t help that she wanted the dogs removed from the flight so that she could fly. To be fair, the officer grabbing her isn’t winning points either.

“If you look at the police, they were being overly aggressive,” Bill Dumas, the passenger who recorded the incident, told CBS. “Really, she wasn’t giving them much of a choice, and the people on the plane were saying, ‘Just get off the plane,'” he said.

Southwest also acknowledged the use of force in a statement and said it was unfortunate officers resorted to forcing her off the plane. “We are disheartened by the way this situation unfolded,” Southwest said.

I have a deadly pet allergy, but NO! I will NOT get off the plane. 🤔 https://t.co/5RKmKfFYIc

Get over it passenger, pets are allowed on flights; take a shot for your allergies or drive. https://t.co/LOpRrQNii6

If I had a true “life threatening” allergy to a pet, and saw one on the plane. You couldn’t get me off the plane fast enough. Not buying it

Yes a win for the dogs 🐕

Let’s assume passenger at risk did continue her journey, she went to a life death convulsion, what would #SouthWest position be, Act of God?

This Southwest video has me heated. Learn the facts before you post some shit about boycotting. The passenger was in the wrong.

Public records show Daulatzai was arrested in 2006 for an unspecified misdemeanor citizen arrest through the Los Angeles Police Department.

In the video, she can be heard telling the officers, “I’m a professor, what are you doing.” She’s listed as a new faculty member at the Maryland Institute College of Art. She was previously a visiting assistant professor of Women’s Studies and Islamic Studies at the Harvard Divinity School.

The airline also apologized to Daulatzai. But Twitter isn’t commiserating.

WATCH: This house can fold and unfold itself in 10 minutes